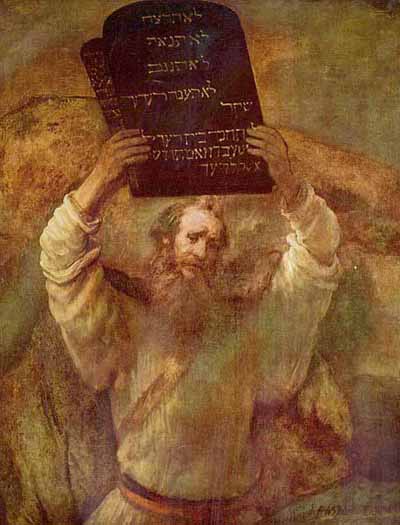 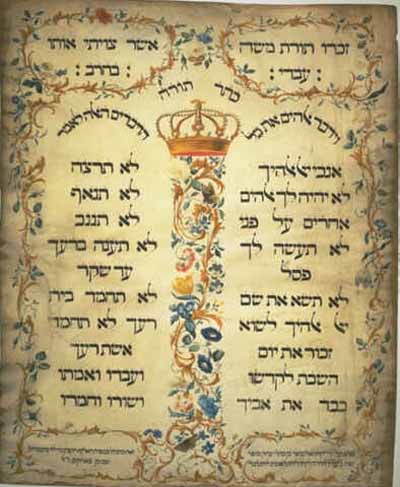 The Ten Commandments, in biblical Hebrew are called and translated as Ten Statements. They are ten of the 613 commandments contained in the Torah. In Judaism they are understood as categories or classifications of mitzvot. They are also known to Christians as the Decalogue , which play a fundamental role in most forms of Christianity. They include instructions to worship only God and to keep the Sabbath, and prohibitions against idolatry, blasphemy, murder, theft, and adultery. Different Christian groups follow slightly different traditions for interpreting and numbering them.

The Tablets of Stone, Stone Tablets, Tablets of Law, or Tablets of Testimony (in Hebrew Luchot HaBrit - "the tablets of the covenant") in the Bible, were the two pieces of special stone inscribed with the Ten Commandments when Moses ascended Mount Sinai as recorded in the Book of Exodus. Exodus 31:18 refers to the tablets as the "Tablets of Testimony". According to the Bible, there were two sets. The first, inscribed by God, were smashed by Moses when he was enraged by the sight of the Children of Israel worshiping the Golden Calf; and the second, later cut by Moses and rewritten by God.

According to traditional teachings of Judaism in the Talmud, they were made of blue sapphire stone as a symbolic reminder of the sky, the heavens, and ultimately of God's throne. Many Torah scholars, however, have opined that the Biblical "sapir" was, in fact, the lapis lazuli (Exodus 24:10), a possible alternate rendering of "sapphire" the stone pavement under God's feet when the intention to craft the tablets of the covenant is disclosed (24:12).

The Ten Commandments appear twice in the Hebrew Bible, in the books of Exodus and Deuteronomy. According to the story in Exodus, God inscribed them on two stone tablets, which he gave to Moses on Mount Sinai. Modern scholarship has found likely influences in Hittite and Mesopotamian laws and treaties, but is divided over exactly when the Ten Commandments were written and who wrote them.

According to the Bible, God inscribed the Ten Commandments into stone: "God said to Moses, 'Come up to Me, to the mountain, and remain there. I will give you the stone tablets, the Torah and the commandment that I have written for the people's instruction.'" (Exodus 24:12) also referred to as "tables of testimony" (Exodus 24:12, 31:18, 32:16) or "tables of the covenant" (Deuteronomy 9verses 9, 11, 15), which he gave to Moses.

Traditional Jewish sources (Mekhilta de Rabbi Ishmael, de-ba-Hodesh 5) discuss the placement of the ten commandments on two tablets. According to Rabbi Hanina ben Gamaliel, five commandments were engraved on the first tablet and five on the other, whereas the Sages contended that ten were written on each.

While most Jewish and Christian depictions follow the first understanding, modern scholarship favors the latter, comparing it to treaty rite in the Ancient Near East, in the sense of tablets of covenant.

Diplomatic treaties, such as that between Egyptian Pharaoh Ramses II and the Hittite King Hattusilis III, circa 1270 B.C.E, were duplicated on stone with a copy for each party, and the subordinate party would place their copy of the pact in the main temple to his god, in oath to the king (cf. Ezekiel 17:11-19). In a pact between a nation and its God, then, the Israelites placed both copies in their temple.

Exodus 32:15 records that the tablets "were written on both their sides."

The letter samec in the Hebrew alphabet looks similar to the letter "O" in the English alphabet. The stone in the center part of the letter should have fallen out, as it was not connected to the rest of the tablet, but it did not; it miraculously remained in place. Secondly, the writing was miraculously legible from both the front and the back, even though logic would dictate that something carved through and through would show the writing in mirror image on the back.


Texts of the Ten Commandments 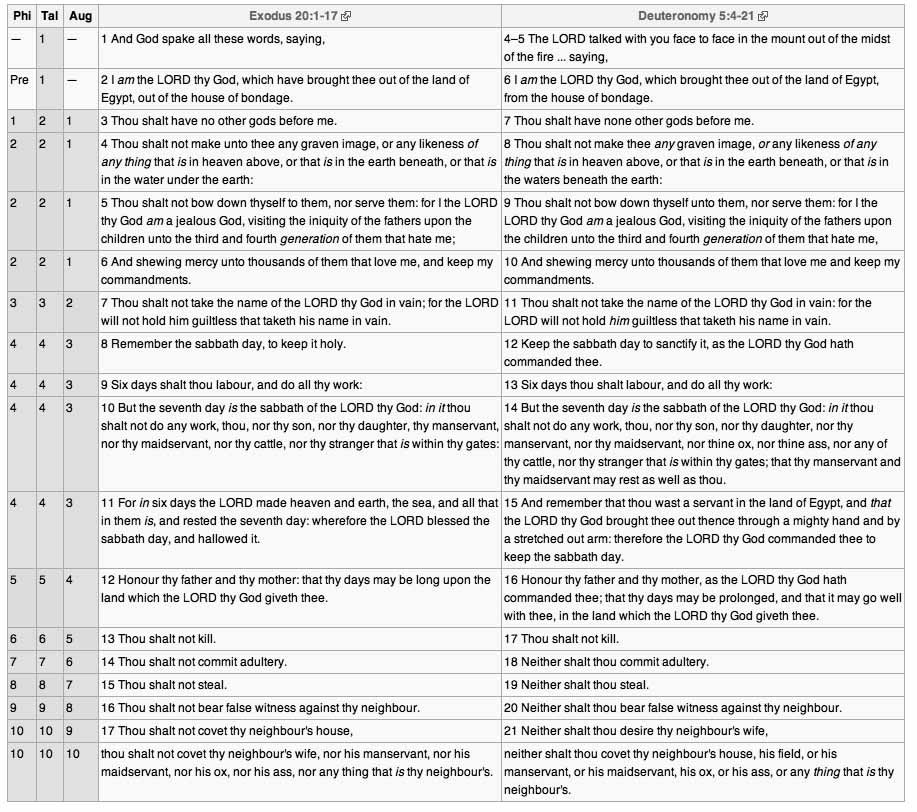 Religious groups have divided the commandments in different ways. For instance, Catholics and Lutherans see the first six verses as part of the same command prohibiting the worship of pagan gods, while Protestants (except Lutherans) separate all six verses into two different commands (one being "no other gods" and the other being "no graven images"). The initial reference to Egyptian bondage is important enough to Jews that it forms a separate commandment. Catholics and Lutherans separate the two kinds of coveting (namely, of goods and of the flesh), while Protestants (but not Lutherans) and Jews group them together.

A very similar, but not completely identical, list of commandments is found in Deuteronomy 5:1-22. Reference to each of the commandments and the consequences for not following them as a part of Hebrew Law are found throughout this book. In the New Testament book of Matthew 19 and elsewhere, Jesus refers to the commandments, but condenses them into two general commands: love God (Shema) and love other people (Ethic of reciprocity) (Matthew 22.34-40).

Although the Ten Commandments in the Douay Rheims Bible and King James Version of the Bible are the most well-known in the English-speaking world, they do not conform to modern common English, using "Thou shalt not kill" instead of "You shall not kill."

Popular belief holds that these are "the commandments" of the Hebrew Bible. In fact, the Torah has 613 commandments. The Jewish tradition does, however, recognize these "ten commandments" as the ideological basis for the rest of the commandments (see below). According to the Medieval Sefer ha-Chinuch, the first five statements concern the relationship between God and human beings, while the second five statements concern the relationship between human beings. Rabbinic literature holds that the Ten Statements contain 14 or 15 distinct instructions.

The Bible chapter that contains the Ten Commandments (Exodus XX) follows the recitation of the Commandments with a complete set of legal rules, which are based on the "eye for an eye, tooth for a tooth" legal philosophy of Hammurabi's Code.

The first four Commandments are not related to justice per se but are purely religious statements. But others represent basic principles of justice which have been adhered to by society since they were first published. For some societies, the Commandments were a turning point where essential points such as "thou shalt not kill" or "commit adultery" were accepted as law; behavior that was from that point on formally and officially condemned. The Bible makes it quite clear that to transgress the Commandments was punishable: "the soul that sinneth, it shall die", "sin is the transgression of the law" and "If you want to enter into life, keep the commandments".

While other faiths do not generally recognize the Ten Commandments in their unity, many of them (Buddhism, Hinduism, Jainism, etc.) have comparable laws or principles. The Roman tradition was the Twelve Tablets. 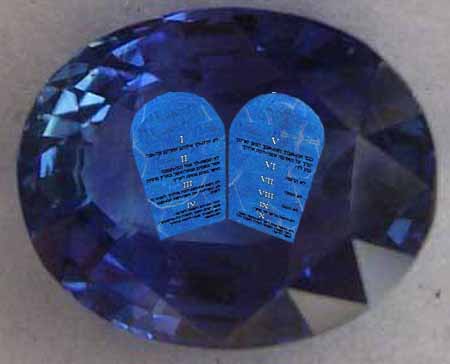 According to traditional teachings of Judaism in the Talmud, the 10 Commandments, or Torah, or Tablets of Stone - were made of blue sapphire stone as a symbolic reminder of the sky, the heavens, and ultimately of God's throne. Many Torah scholars, however, believe that the Biblical "sapir" was, in fact, the lapis lazuli (Exodus 24:10), a possible alternate rendering of "sapphire" the stone pavement under God's feet when the intention to "craft" the tablets of the covenant is disclosed (24:12). 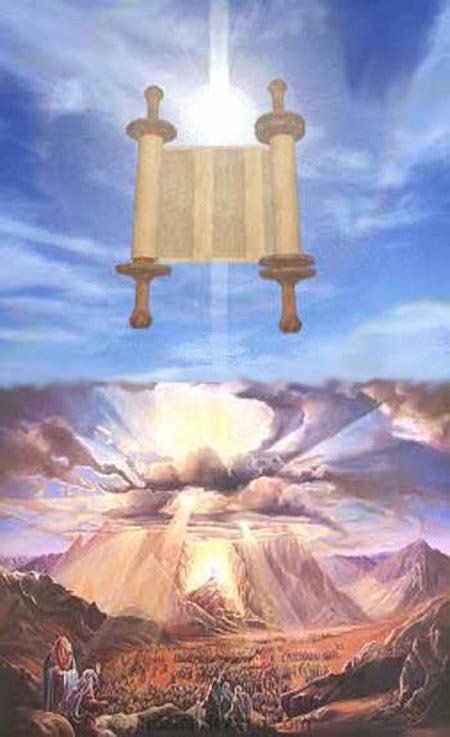 Shavuot marks the day the Torah was given at Mount Sinai.

This event was connected to an Ancient Alien visitation.


The Torah is the Story of Humanity written on Cylinder Seals. 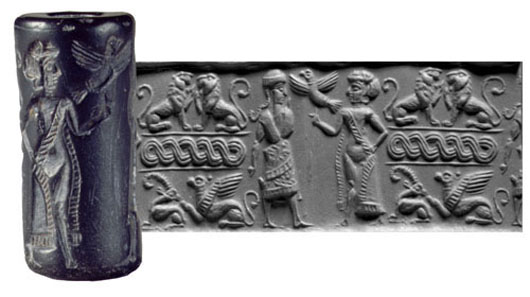 In the Story Anunnaki created a biogenetic experiment called Humans.

Moses and the Decalogue 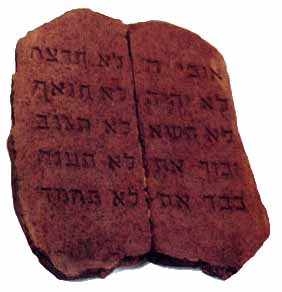 
The 10 Commandments are another engima, whose purpose and very existence have been passed down through the millennia, allowing souls to believe in a god who would seek balance and light in our human experiment, yet by the very nature of our creation, duality, could never be achieved. The tablets allegedly have been placed in the Ark of the Covenant another engima which sends people questing for a truth about creation - buried for all time in a cave or temple - symbol for mind. It's all about the quest and the questions.