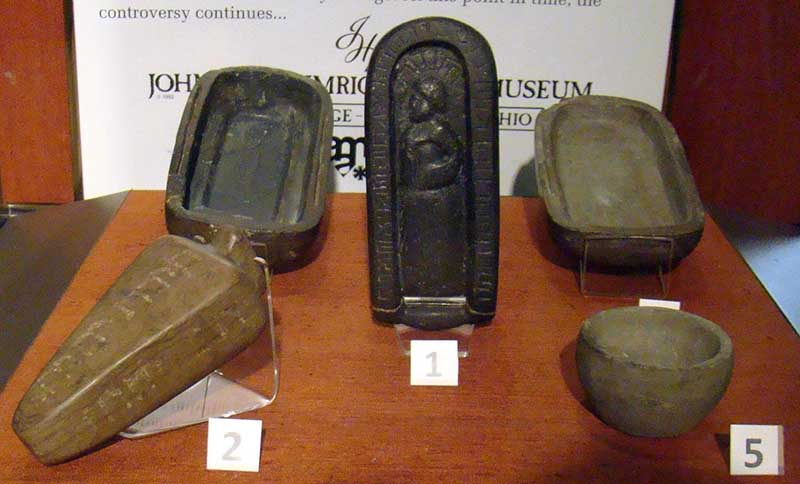 The Newark Holy Stones refer to a set of artifacts allegedly discovered by David Wyrick in 1860 within a cluster of ancient Indian burial mounds near Newark, Ohio. The set consists of the Keystone, a stone bowl, and the Decalogue with its sandstone box. They can be viewed at the Johnson-Humrickhouse Museum in Coshocton, Ohio. The site where the objects were found is known as The Newark Earthworks, one of the biggest collections from an ancient American Indian culture known as the Hopewell that existed from approximately 100 BC to AD 500. The events surrounding the discovery and authenticity of the artifacts are controversial. A wide consensus believes that the artifacts are either the subject of a hoax or originate from a time period that has no relation to the Hopewell. Others believe that the artifacts' inscription contains dialect that is in fact of Judean descent and could have existed during that time.

As the story goes ... In November of 1860, David Wyrick of Newark, Ohio found an inscribed stone in a burial mound about 10 miles south of Newark, Ohio. The stone is inscribed on all sides with a condensed version of the Ten Commandments or Decalogue, in a peculiar form of post-Exilic square Hebrew letters.

The robed and bearded figure on the front is identified as Moses in letters arching over his head. The inscription is carved into a fine grained stone that has eluded geological identification. The stone is black to the eye, although it takes on a brown tone in these overexposed color photographs. 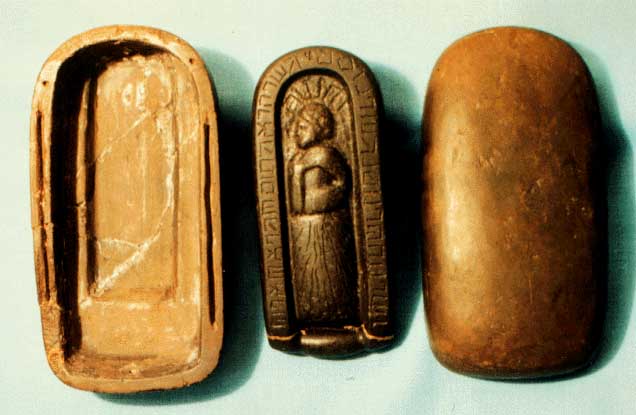 The inscribed stone was found inside a sandstone box, smooth on the outside, and hollowed out to exactly hold the stone on the inside. The Decalogue inscription begins at the non-alphabetic symbol at the top of the front, runs down the left side of the front, around every available space on the back and sides, and then back up the right side of the front to end where it begins, as though it were to be read repetitively. 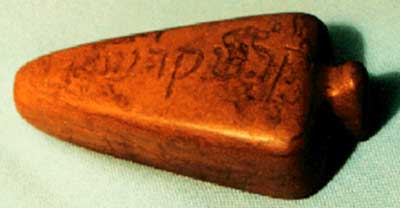 Several months earlier, in June of 1860, Wyrick had found an additional stone, also inscribed in Hebrew letters. This stone, shown above, is popularly known as the "Keystone" because of its general shape. However, it is too rounded to have actually served as a keystone. It was apparently intended to be held with the knob in the right hand, and turned to read the four sides in succession, perhaps repetitively. It might also have been suspended by the knob for some purpose. Wyrick found the Keystone within what is now a developed section of Newark, at the bottom of a pit adjacent to the extensive ancient Hopewellian earthworks there (c. 100 BC - 500 AD).

The letters on the Keystone are nearly standard Hebrew, rather than the very peculiar alphabet of the Decalogue stone. These letters were already developed at the time of the Dead Sea Scrolls (circa 200-100 B.C.), and so are broadly consistent with any time frame from the Hopewellian era to the present. For the past 1000 years or so, Hebrew has most commonly been written with vowel points and consonant points that are missing on both the Decalogue and Keystone. The absence of points is therefore suggestive, but not conclusive, of an earlier date.


Inscriptions on the four sides


Did Wyrick Fake The Stones?

Archaeologists, following Whittlesey (1872), have generally believed that the Decalogue and Keystone are hoaxes concocted by Wyrick himself. However, in 1861 Wyrick published a pamphlet (reproduced by Schenck) containing his account of the discoveries, and included woodcuts depicting, to the best of his ability, the inscriptions on the stones. A careful comparison of Wyrick's woodcuts of the Decalogue to the actual inscription (McCulloch 1992) shows that out of 256 letters, Wyrick made no less than 38 significant errors, in which he either made a legible letter illegible, turned a legible letter into a different letter, or omitted the letter altogether. Whoever carved the Decalogue stone had only imperfect knowledge of Hebrew, and introduced a few errors of his own. Wyrick, however, piled his own errors on top of these. He clearly did not even understand the inscription's peculiar, yet consistently applied, alphabet, and therefore could not have been its author.

Moses on the stone has a mild expression and fine features. He is wearing a turban and flowing robe, and is either holding a tablet or wearing a breastplate. Wyrick's Moses, on the other hand, glares over a projecting nose. He is wearing a beret, Mrs. Wyrick's 19th century dress, and a minister's ecclesiastical shawl. Wyrick was evidently a fine draftsman, but not much at life drawing. Beverley H. Moseley, Jr., former art director of the Ohio Historical Society, has compared the carving of Moses on the stone to Wyrick's woodcut copy. It is his opinion as a professional artist that the same person could not have made these two images.

In Wyrick's drawing of the Keystone, he confuses he with taw, so that the inscription TWRT YHWH, (Torath YHWH, The Law of God) appears as HWRH YHWH, or Horah God, which amusingly could be taken to be a reference to a popular Israeli folk-dance. Wyrick therefore could not have produced the Keystone either.

Archaeologist Stephen Williams claims that Wyrick was very committed to the Lost Tribes of Israel as the origin of the Moundbuilders prior to his discovery of the Keystone, with the implication that Wyrick may therefore have fabricated the Keystone and Decalogue in order to support his pet theory (1991:168). However, Wyrick somehow neglected to mention this alleged obsession in any of his surviving correspondence or even in his very pamphlet on the stones. He was described at the time of the Keystone discovery as merely an "enthusiast for natural science" (by Charles Whittlesey in the Ohio Farmer July 14, 1860, reprinted by Schenck). Wyrick's documented interests, besides mound exploration and surveying, included geo-magnetism, anomalous boulders, river terraces, beaver dams and sorghum processing.

In any event, the "Lost Tribes of Israel" would have used the pre-Exilic "Old Hebrew" alphabet, rather than the post-Exilic or "Square Hebrew" alphabet adopted in the time of Ezra by the Jews (by definition the "Unlost" tribe), and which appears, in two versions, on both these stones. There is therefore no question of a "Lost Tribes" connection here, Williams' misconception to the contrary notwithstanding.

In 1971, Cyrus Gordon identified the letters inscribed on the stone as Paleo-Hebrew of approximately the first or second century A.D. According to him, the five letters to the left of the comma-shaped word divider read, from right to left, LYHWD, or "for Judea." In 1988, wood fragments found with the inscription were Carbon-14 dated to somewhere between 32 A.D. and 769 A.D. These dates are consistent with the apparent date of the letters. Today the stone resides out of sight in a back room of the National Museum of Natural History in Washington, D.C.


Ancient Travels to the Americas or a Modern Forgery? Who Made the Battle Creek Inscription?   Epoch Times - June 3, 2016 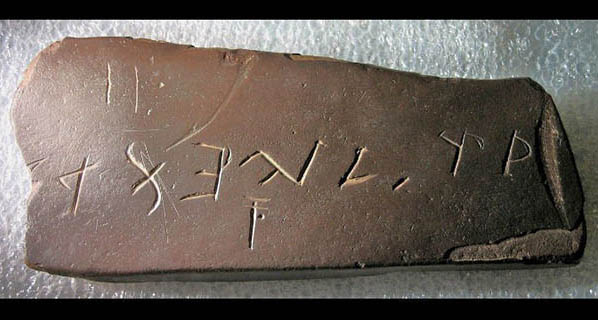 The Battle Creek Stone was discovered in a small mound near Knoxville, Tenn., in 1889. It is a small stone tablet engraved with several mysterious characters. The stone was discovered by a team led by archaeologist and ethnologist Cyrus Thomas from the Smithsonian Bureau of Ethnology's Mound Survey. Eight years earlier, Congress assigned the Institute to complete archaeological excavations. After just a few years of exploring the prehistoric mounds, archaeologists had collected over 40,000 artifacts and wrote a 700-page report of their findings, which was presented in 1894. Thomas wondered if the tablet displayed a pre-Columbian language. He was fascinated with the tablet and its secrets, however he didn't have enough knowledge or tools to examine the discovery properly.