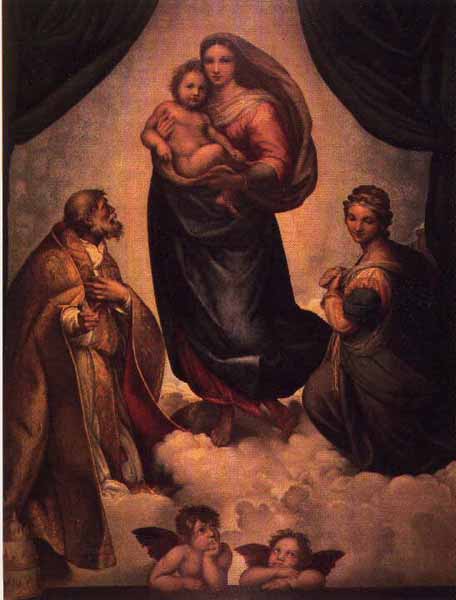 Sophia is the central pivot of creation and represents the feminine aspect in all things.
She is Wisdom Incarnate, the Goddess of all those who are wise.

Sophia (pronounced sew-fee'ah) in Greek, Hohkma in Hebrew, Sapientia in Latin, Celtic goddess-figure Sheela-na-gigs - all mean wisdom,. The Judeo-Christian God's female soul, source of his true power is Sophia. As Goddess of wisdom and fate , her faces are many: Black Goddess, Divine Feminine, Mother of God The Gnostic Christians, Sophia was the Mother of Creation; her consort and assistant was Jehovah. Her sacred shrine, Hagia Sophia in Istanbul, is one of the seven wonders of the world. Her symbol, the dove, represents spirit; she is crowned by stars, a Middle Eastern icon, to indicate her absolute divinity.

Sophia is found throughout the wisdom books of the Bible. There are references to Her in the book of Proverbs, and in the apocryphal books of Sirach and the Wisdom of Solomon (accepted by Catholics and Orthodox, found in the Greek Septuagint of the early Church).

She is usually associated with wise King Solomon. 1 Kings 4:29-31 tells us that God gave wisdom to Solomon, and that he became wiser than all the kings of the East and all the wise people of Egypt. Wisdom 8:2, 16, 18 tells us that Solomon was seen as married to Sophia.

The Song of Songs - known as Song of Solomon or Canticle of Canticles - speaks of Solomon's marriage to Holy Sophia.

Wisdom 9:8-11 tells us that Sophia instructed Solomon in building the Temple!

The Jews revered Sophia. King Solomon even put Her right in the Temple, in the form of the Goddess Asherah.

After the reforms of King Josiah, there was a threat that the veneration of Sophia would come to a halt - there was even more of a threat when patriarchal Christianity took over the world.

Thanks to her continuing presence in the world and her presence in the Bible, veneration of Sophia continued in the Eastern tradition with the construction of the Hagia Sophia and the Russian Catholic liturgical service to Sophia combined with the assumption of Mary on May 15.

Yet the Eastern Christians are not the only Christians to venerate Sophia.

Sophia was very likely venerated by early Followers of the Way, and her veneration has survived in the West today in the form of Gnosticism.

Gnostics see her as one of the aeons, one of the quasi-deities who live in the ethereal realm known as the pleroma.

Gnostics believe that she gave birth to or brought about the creation of a negative aeon, who later came to be called an archon, called the Demiurge, creator and ruler of this world.

Gnostics see the Demiurge as the God of the Old Testament, with his strict rules and chains that bind the people of the Earth. Gnostics believe that Sophia and the Father God (not the Demiurge) sent Yeshua to right this wrong. In Gnostic tradition, Sophia plays a very active role in our world. 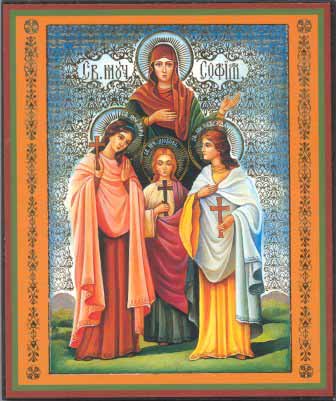 Esoteric Christianity doesn't typically support the theory of the Demiurge. It believes that creation is inherently good, and as such so is the Creator.

However, the Mystery School does teach that Shaitan, the devil, was the ruler of this world and had accidentally been given the keys to the Otherworlds by the Goddess.

He had these keys until the passion, death, and Resurrection of Yeshua, when Yeshua obtained the keys once more and holds them still.

The Mystery School sees many similarities between Sophia and the two Christian Goddesses, Mother Mary and Mary Magdalene. Perhaps one or both of them were incarnations of Sophia. 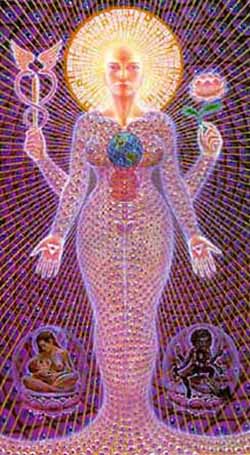 The Grid - Tree and Flower of Life - Creation 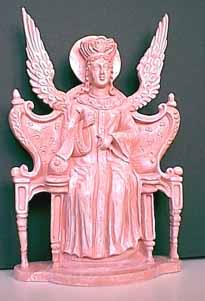 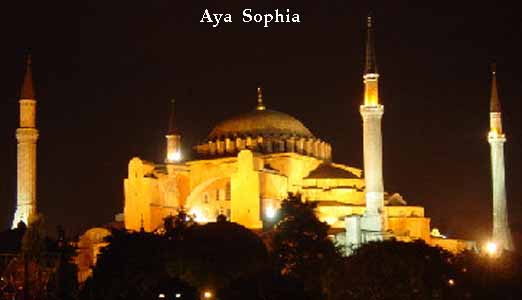 Aya Sophia was originally a Christian church at Constantinople (now Istanbul), later a mosque, and now converted into a museum. 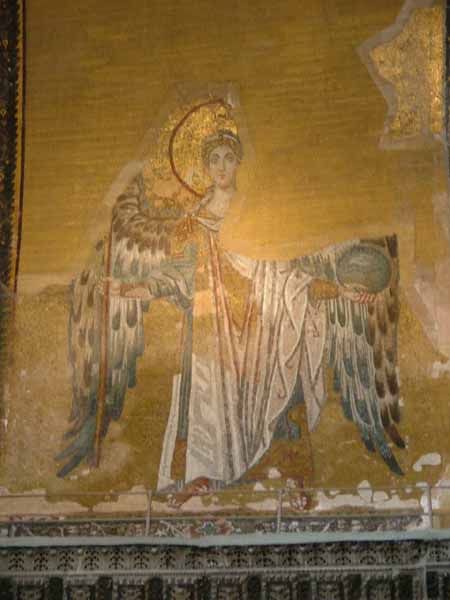 Above the direction of prayer 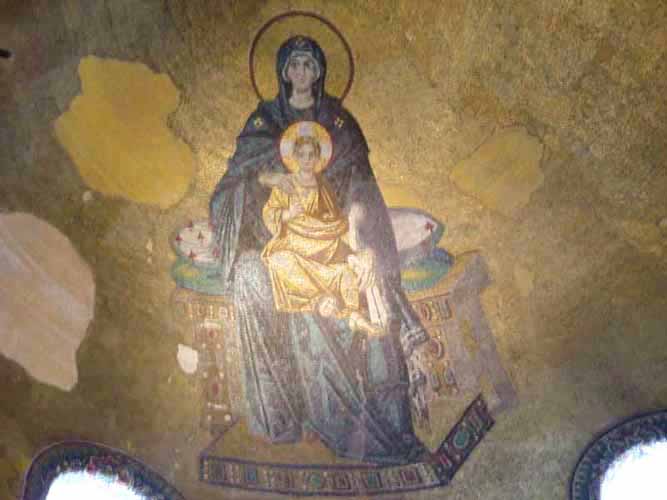 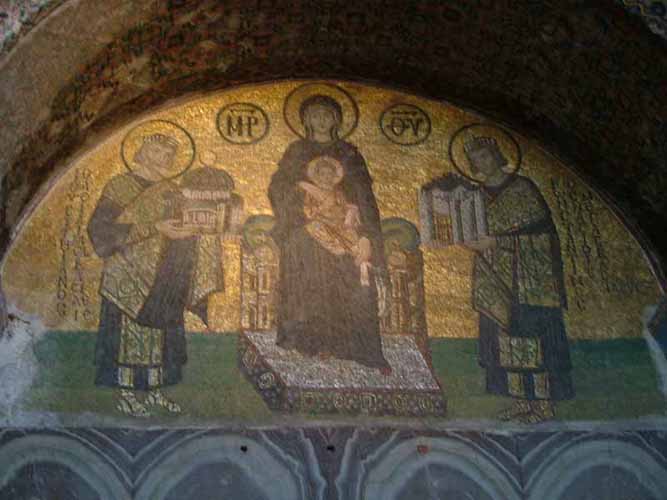 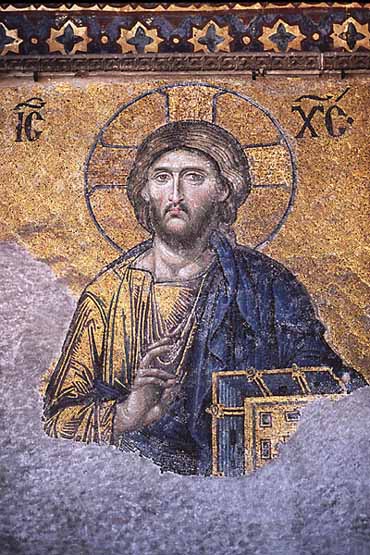 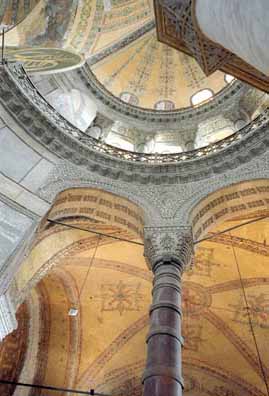 
Hagia Sophia is the supreme masterpiece of Byzantine architecture. Its spacious nave is covered by a lofty central dome carried on pendentives, a device not previously employed in monumental construction. Pendentives make possible support of the dome on a square framework of four huge equal arches resting on huge piers. The arches at the east and west are extended and buttressed by great half domes, while the half domes in turn are carried on smaller semidomed exedrae. A vast oblong interior, 102 ft (31 m) by 265 ft (81 m), is thus created from a succession of domical elements that build up to the main dome, 102 ft (31 m) in diameter and 184 ft (56 m) high, in which a corona of 40 arched windows sheds a flood of light on the interior.

At the east end of the nave is the vaulted sanctuary apse and at the west end a great narthex or vestibule, beyond which an exonarthex opens to the forecourt, or atrium. Flanking the nave to the north and south are side aisles with galleries over them. Their massive vaults, carried at both levels by monolithic columns of green and white marble and purple porphyry, serve as buttresses to receive the thrust of the great dome and its supporting arches. The vast interior is thus wholly free of suggestion of ponderous load, and its effect is that of a weightless golden shell that seems to possess a miraculous inherent stability.

In this one structural organism the Roman methods of construction are epitomized, modified and enriched by new aesthetic theories and realized in strikingly colorful materials and ornamental techniques. These materials and techniques are often considered Eastern, but they are in fact the logical outgrowth of trends already apparent in Roman imperial buildings of the first three centuries A.D. All interior surfaces are sheathed with polychrome marbles and gold mosaic, encrusted upon the brick core of the structure; most of the magnificent figure mosaics have been cleaned and restored to view. Externally, the broad, smooth surfaces of stuccoed walls and the great unconcealed masses of vaults and domes pile up impressively. Hagia Sophia served as model for several of the great Turkish mosques of Constantinople.

Hagia Sophia stands on the site of an earlier basilican church erected by Constantius II in 360, some 30 years after Byzantium had become the capital of the Roman Empire. This church was burned in 404 and rebuilt by Theodosius II in 415, only to be again destroyed by fire in 532. The present structure, which is entirely fireproof, was built in 532Đ37 by Emperor Justinian from designs of his imperial architects Anthemius of Tralles and Isidorus of Miletus. As a result of severe earthquakes, the dome collapsed in 558, but it was rebuilt by 563 on a somewhat higher curve.

With the Turkish conquest of Constantinople in 1453, Hagia Sophia became a mosque, and in subsequent years all the interior figure mosaics were obscured under coatings of plaster and painted ornament; most of the Christian symbols elsewhere were obliterated. The four slender minarets, which rise so strikingly at the outer corners of the structure, were added singly and at different times; the crescent supplanted the cross on the summit of the dome, and the altar and the pulpit were replaced by the customary Muslim furnishings.

In Gnostic tradition, the term Sophia (Greek for "wisdom"), refers to the final and lowest emanation of God. In most if not all versions of the gnostic myth, Sophia brings about an instability in the Pleroma, in turn bringing about the creation of materiality. Thus a positive or negative view of materiality depends a great deal on the interpretations of Sophia's actions in the myths. She is occasionally referred to by the Hebrew equivalent of Achamoth (this is a feature of Ptolemy's version of the Valentinian gnostic myth).

Almost all gnostic systems of the Syrian or Egyptian type taught that the universe began with an original, unknowable God, referred to as the Parent or Bythos, or as the Monad by Monoimus. It can also be equated to the concept of Logos in stoicism, esoterism, or theosophical terms (The 'Unknown Root'). It is also known as the first Aeon by still other traditions. From this initial unitary beginning the One spontaneously emanated further Aeons, being pairs of progressively 'lesser' beings in sequence. The lowest of these pairs were Sophia and Christ. The Aeons together made up the Pleroma, or fullness, of God, and thus should not be seen as distinct from the divine, but symbolic abstractions of the divine nature.