The Need to be Heard ... Soapbox Messages ... Social Networking 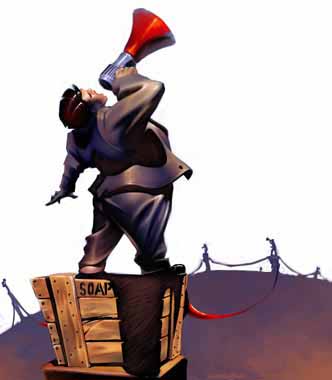 Get up on the soapbox and announce your theory or soap opera story about how your theory came to you.

It's show time and it would appear that many people need to feel special and seek recognition. This goes to acceptance issues and the good old healing grid. They generally say, "I have proof," which is most often not credible.

Does anybody care anymore after we have seen and heard it all over the years?

Experienced researchers could care less. The rest of the world awaits scientific proof.

I suppose in end times whacky people will come out of the woodwork to be heard and will get very upset when not praised for their efforts.

It's no wonder the social networking websites have taken off like wildfire. We enjoy people of like mind to share ideas and make friendships, but people with emotional problems, or those who have been called crazy all of their lives, can take this too far as they now have an audience.

In the end, the truth will show itself. Conspiracy theories, allegedly UFO blobs on a screen, audio and video, may be food for thought ... but how does that change anything for humanity?

As for my theories - I put them out there and whoever connects ... connects .. no biggie.

In the end, everyone must find a truth that makes sense to them and 'go' with it.