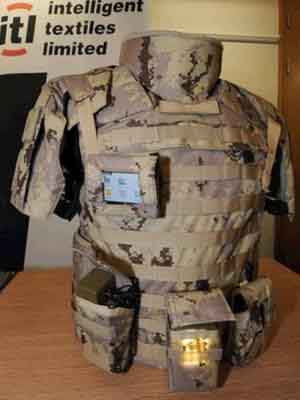 The Age of Technology brings new and improved uniforms for men who risk their lives to protect us each day. Here are two of the latest designs to that end.


E-textiles, also known as electronic textiles or smart textiles, are fabrics that enable computing, digital components, and electronics to be embedded in them. Part of the development of wearable technology, they are known as intelligent clothing or smart clothing because they allow for the incorporation of built-in technological elements in everyday textiles and clothes. Electronic textiles do not strictly encompass wearable computing because emphasis is placed on the seamless integration between the fabric and the electronic elements, such as cables, microcontrollers, sensors and actuators. The field of embedding advanced electronic components onto textile fibers is sometimes called fibertronics.


Intelligent Clothing Could Save US Military Lives   Live Science - May 15, 2012
When soldiers fall wounded on future battlefields, their smart uniforms may instantly report the location of gunshot wounds or even detect traces of nuclear, biological or chemical attacks in blood and sweat. That intelligent clothing could make a lifesaving difference in medical care and give U.S. commanders a sense of battles unfolding as casualties mount. The smart uniforms would include medical sensors built into the fabric to monitor the health of U.S. troops. Smart clothing fibers might even "estimate the depth of penetration" from bullets or shrapnel and how they affect surrounding organs, according to the DTRA solicitation. Sensors could also detect specific "biomarkers" in human blood, saliva, sweat or urine that reveal the presence of chemical or biological weapons, radiation from nuclear weapons or even traces of explosives left by a roadside bomb.


Air Conditioned Clothes Take the Heat off Police Officers   Live Science - May 15, 2012
Hot summer days just got a little cooler, since researchers are developing clothing with a built-in cooling system. The system is specifically designed for police wearing bulletproof vests, which often make them sweat profusely. Life as a policeman can be uncomfortable. Many pieces of work clothing seem to make wearer comfort a low priority. Bullet-proof vests made of Kevlar, as their name suggests, hold off bullets but they are also impenetrable for water vapor. Thus police personnel who must wear such gear under their uniforms sweat profusely when the weather is warm. A situation that is merely uncomfortable when working in the office negatively affects the physical performance of police officers on duty