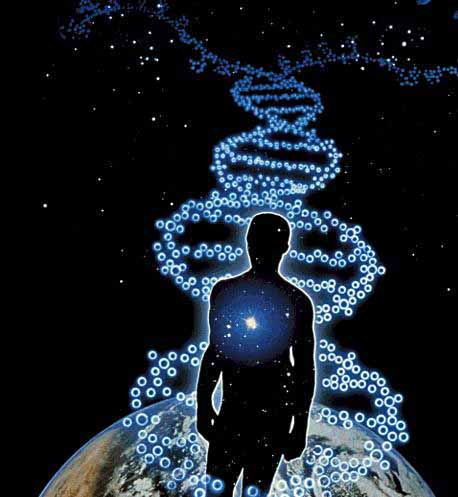 Life is a DNA Roadmap.


Everything we do is genetically encoded in our DNA before we are born. Reality is about playing out those patterns/codes in the time you remain here, for experience and knowledge. Our DNA is a blueprint of everything that will happen to a person. This goes to Free Will. Some believe in it - some don't. I believe it is limited to the most minute things we do, such as the color of the clothing you are wearing today. You are your programming, which attracts lessons and people to it as if by synchronicity. You are programmed to believe in Free Will, but in truth we are projected illusions in a consciousness hologram that had a beginning and is about to evolve back to light.

On our consciousness level of experience, we are getting closer to finding the truth behind the illusion - but of course that is in the genetic map of our journey here.

About activating your DNA before it is ready to do so, it won't happen. It activates based on your programmed codes ... then off you go to find answers.

The human brain is an electrochemical machine that responds to stimuli - sex being a great activator. You see it ... you want it ... you get aroused ... and then decide what 'comes' next.

One of the driving forces of the journey is sex and procreation. You say sex, and you command attention. Our thought on monogamy are drastically changing - for both men and women.

Fewer and fewer people remain monogamous today as the soul attracts others for with whom we are to play out our games. from the one-night stand, to the transition person, to the soul mate for life - it's all subject to changes as dictated by our genetic programming.

This also applies to homosexuality - also genetically linked and often sought after a lifetime of being straight and feeing unfilled. It's all in your genes/jeans.

People often respond to monogamy based on family patterns which take us to cultural backgrounds and how a culture is coded to behavior towards sexual partners.

When you meet someone and hope the relationship will last - check out their genetic codes for emotional problems, substance abuse and more. They are all part of the 'package' and are not 'junk' (as in airport security) DNA !

Be realistic in choosing your partner, in your own views about monogamy, and how you behave when caught with our pants down!


New study suggests that a propensity for one-night stands, uncommitted sex could be genetic   PhysOrg - December 1, 2010
So, he or she has cheated on you for the umpteenth time and their only excuse is: "I just can't help it." According to researchers at Binghamton University, they may be right. The propensity for infidelity could very well be in their DNA.

In a first of its kind study, a team of investigators led by Justin Garcia, a SUNY Doctoral Diversity Fellow in the laboratory of evolutionary anthropology and health at Binghamton University, State University of New York, has taken a broad look at sexual behavior, matching choices with genes and has come up with a new theory on what makes humans 'tick' when it comes to sexual activity. The biggest culprit seems to be the dopamine receptor D4 polymorphism, or DRD4 gene. Already linked to sensation-seeking behavior such as alcohol use and gambling, DRD4 is known to influence the brain's chemistry and subsequently, an individual's behavior.

"We already know that while many people experience sexual activity, the circumstances, meaning and behavior is different for each person," said Garcia. "Some will experience sex with committed romantic partners, others in uncommitted one-night stands. Many will experience multiple types of sexual relationships, some even occurring at the same time, while others will exchange sex for resources or money. What we didn't know was how we are motivated to engage in one form and not another, particularly when it comes to promiscuity and infidelity."

Gathering a detailed history of the sexual behavior and intimate relationships of 181 young adults along with samples of their DNA, Garcia and his team of investigators were able to determine that individual differences in sexual behavior could indeed be influenced by individual genetic variation.

"What we found was that individuals with a certain variant of the DRD4 gene were more likely to have a history of uncommitted sex, including one-night stands and acts of infidelity," said Garcia. "The motivation seems to stem from a system of pleasure and reward, which is where the release of dopamine comes in. In cases of uncommitted sex, the risks are high, the rewards substantial and the motivation variable Đ all elements that ensure a dopamine 'rush.'"

According to Garcia, these results provide some of the first biological evidence that at first glance, seems to be somewhat of a contradiction: that individuals could be looking for a serious committed long-term relationship, but have a history of one-night stands. At the same time, the data also suggests it is also reasonable that someone could be wildly in love with their partner, commit infidelity, and yet still be deeply attached and care for their partner. It all came back to a DRD4 variation in these individuals. Individual differences in the internal drive for a dopamine 'rush' can function independently from the drive for commitment.

"The study doesn't let transgressors off the hook," said Garcia. "These relationships are associative, which means that not everyone with this genotype will have one-night stands or commit infidelity. Indeed, many people without this genotype still have one-night stands and commit infidelity. The study merely suggests that a much higher proportion of those with this genetic type are likely to engage in these behaviors."

Garcia also cautions that the consequences of risky sexual behavior can indeed be extreme. "One-night stands can be risky, both physically and psychologically," said Garcia. "And betrayal can be one of the most devastating things to happen to a couple. These genes do not give anyone an excuse, but they do provide a window into how our biology shapes our propensities for a wide variety of behaviors."

At this point, very little is known about how genetics and neurobiology influence one's sexuality propensities and tendencies but Garcia is hopeful that this study will add to the growing base of knowledge - in particular, how genes might predispose individuals to pursue sensation seeking across all sorts of domains Đ from substance use to sexuality. This study also provides further support for the notion that the biological foundations for sexual desire may often operate independently from, although absolutely linked to, deep feelings of romantic attachment.

As Garcia points out, he and his team of study co-authors have only just begun to explore the issue and plan on conducting a series of follow-up and related studies. "We want to run a larger sample of men and women to replicate these findings and check for several other possible genetic markers," said Garcia. "We will also be conducting a number of behavioral and biological studies to better understand what kinds of associated factors motivate uncommitted sexual behavior. Most importantly, we want to explore the receiving end of infidelity by looking at how people respond to cases of uncommitted sex and infidelity."