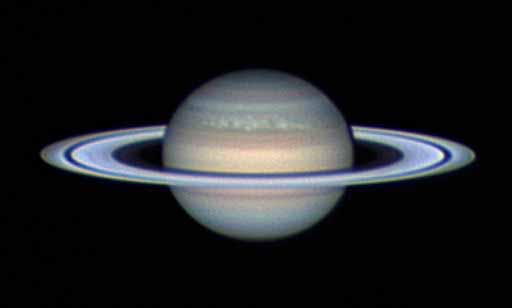 Saturn has been known since prehistoric times. In ancient times, it was the most distant of the five known planets in the solar system (excluding Earth) and thus a major character in various mythologies.

Babylonian astronomers systematically observed and recorded the movements of Saturn.

In Hindu astrology, there are nine astrological objects, known as Navagrahas. Saturn, one of them, is known as "Shani", judges everyone based on the good and bad deeds performed in life. In the 5th century CE, the Indian astronomical text Surya Siddhanta estimated the diameter of Saturn as 73,882 miles, an error of less than 1% from the currently accepted value of 74,580 miles, for which there exist several possible explanations.

Ancient Chinese and Japanese culture designated the planet Saturn as the Earth Star. This was based on Five Elements which were traditionally used to classify natural elements.

In ancient Hebrew, Saturn is called 'Shabbathai'. Its angel is Cassiel. Its intelligence or beneficial spirit is Agiel (layga) and its spirit (darker aspect) is Zazel (lzaz).

In Ottoman Turkish, Urdu and Malay, its name is 'Zuhal', derived from Arabic.

In ancient Roman mythology, the god Saturnus, from which the planet takes its name, was the god of the agricultural and harvest sector. The Romans considered Saturnus the equivalent of the Greek god Cronus. The Greeks had made the outermost planet sacred to Cronus, and the Romans followed suit. Ptolemy, a Greek living in Alexandria, observed an opposition of Saturn, which was the basis for his determination of the elements of its orbit.

Cronus was the ruling Titan who came to power by castrating his Father Uranus. His wife was Rhea. There offspring were the first of the Olympians. To insure his safety Cronus ate each of the children as they were born. This worked until Rhea, unhappy at the loss of her children, tricked Cronus into swallowing a rock, instead of Zeus. When he grew up Zeus would revolt against Cronus and the other Titans, defeat them, and banish them to Tartarus in the underworld. Cronus managed to escape to Italy, where he ruled as Saturn. The period of his rule was said to be a golden age on Earth, honored by the Saturnalia feast.

Beginning on December 17 of each year, during the festival known as the Saturnalia, the Golden Age was restored for seven days. All business stopped and executions and military operations were postponed. It was a period of goodwill, devoted to banquets and the exchange of visits and gifts. A special feature of the festival was the freedom given to slaves, who during this time had first place at the family table and were served by their masters. 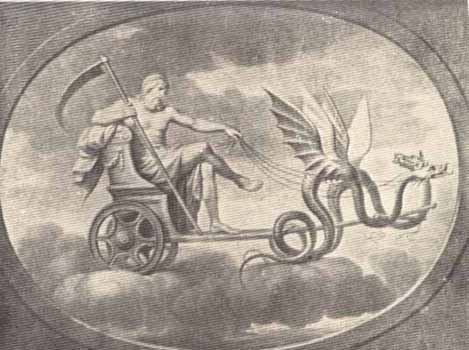 Cronus is occasionally portrayed as a Reptilian


In Greek mythology, Chronos in pre-Socratic philosophical works is said to be the personification of time. He emerged from the primordial Chaos. He is often mythologically confused with the Titan Cronus. He was depicted in Greco-Roman mosaics as a man turning the zodiac wheel. Often the figure is named Aeon (Eternal Time), a common alternate name for the god. His name actually means "Time", and is alternatively spelled Khronos (transliteration of the Greek), Chronos, Chronus (Latin version). Some of the current English words which show a tie to khronos/chronos and the attachment to time are chronology, chronic, and chronicle. 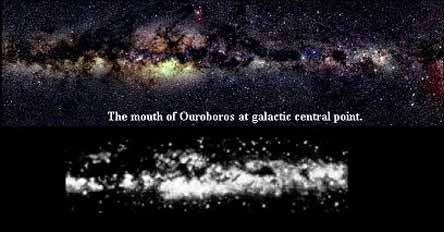 The Milky Way Galaxy is the inspiration for the symbol of the Ouroboros. In mythology the Milky Way Galaxy keeps a 'great time cycle' that ends in catastrophic change. This refers to a serpent of light (Milky Way) residing in the heavens, who, when viewed at the galactic central point near Sagittarius, eats its own tail. Suntelia Aion refers to the sun (light) rising out of the mouth of the ouroboros (aion) on the winter solstice December 21, 2012. Ancient historians, and especially Plato, referred to a cycle of catastrophe at the End of that Age. 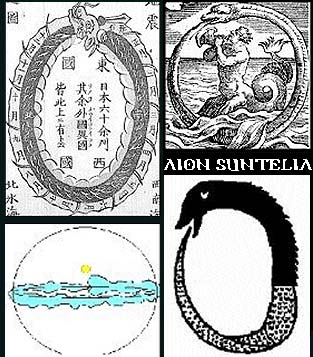 
In astronomy, the planet we now call Saturn because of Roman influence was called Khronos by the Greeks. It was the outermost planet god/deity, and was considered the seventh of the seven heavenly objects that are visible with the naked eye. Given that it had the longest observable repeatable period in the sky, which is currently around 30 years, it was thought to be the keeper of time, or Father Time, since no other objects had been seen or recorded to have a longer period. That is why it is often depicted as an elderly man with a long gray beard.

In Greek myth Chronos, also known as Aion or Aeon, was the god of the Ages (Golden to Brazen) and the Zodiac, parent, with Ananke (Inevitability), to the primordial Phanes, who hatched from the world-egg at the beginning of time; Cronus was the ruler of the Titans, as Titan god of time, born from Ouranos and Gaia, and father of Zeus.

Chronos is a personification of Time, his name is the ordinary Greek word for time. The confusion with Cronus, the Titan, is a Hellenistic invention, explaining Cronus through guesses at his etymology.

The planet Saturn was named after the Roman god equivalent. The Greeks had in turn borrowed this tradition from the east. Many academic works and encyclopedias conflate the two figures, or completely ignore the existence of Chronos, as a distinct and separate embodiment of time. The Britannica 11th Edition notes that Chronos means "time", and is often confused with Cronos, but never says that Chronos was a deity.

Saturn Return in astrology is a phenomenon which is described as influencing a person's life development at 27 to 29 or 30-year intervals. These intervals or "returns" coincide with the approximate time it takes the planet Saturn to make one orbit around the sun, i.e. 2 1/2 years. It is believed by astrologers that, as Saturn "returns" to the degree in its orbit occupied at the time of birth, a person crosses over a major threshold and enters the next stage of life. With the first Saturn return, a person leaves youth behind and enters adulthood. With the second return, maturity. And with the third and usually final return, a person enters wise old age. These periods are estimated to occur at roughly the ages of 27-30, 58-60, 86-88 and so on.

The first Saturn return is most significant because it represents the first test of character and the structures a person has built his life upon. According to traditions, should these structures be unsound, or if a person is living out of touch with his true values, the Saturn return will be a time of upheaval and limitations as Saturn forces him to jettison old concepts and worn out patterns of living. It is not uncommon for relationships and jobs to end during this time of life restructuring and revaluation.

But the Saturn return is not all about painful endings. During this time astrologers note that goals are consolidated and people tend to gain a better vision of where they are going in life. There are added responsibilities and a person may reap the rewards from his hard work. Many major life milestones seem to happen around the ages of 29 and 30. This is why astrologers believe that the 30th birthday is such a major rite of passage because it marks the true beginning of adulthood, self-evaluation, independence, ambition, and self-actualization.

The planet Saturn represents many archetypes, such as Father Time, the Grim Reaper and his scythe, Chronos, and the Lord of Karma and teacher. It is the ruler of limitations, fears, seriousness, responsibilities, burdens, and lessons. While those concepts may come across as negative, Saturn also astrologically rules over civilization, government, structures, harvests, prestige, maturity, discipline and order.

At age 44 one reaches Saturn Opposition when once again the need to create balance and change one's life comes to the fore.

Saturn in your sign brings challenges and learning lessons - a good time for growth and to face issues by choice or because they must be confronted. Saturn transits and cycles can be considered cycles of achievement and maturity. When Saturn forms a hard aspect to a personal point in our chart, we might feel that everything is slowed down--we encounter delays, frustrations, and pressures. But these times also challenge us to face reality, thereby opening ourselves up to increased wisdom and the freedom that comes with living in truth.