The Pyramid of Unas 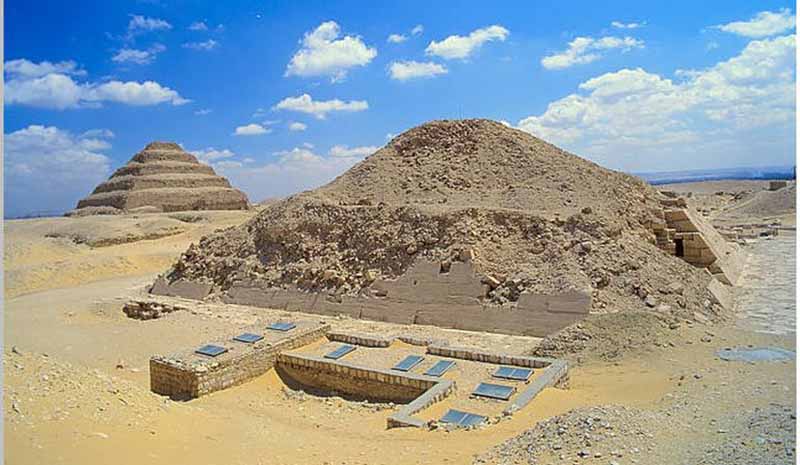 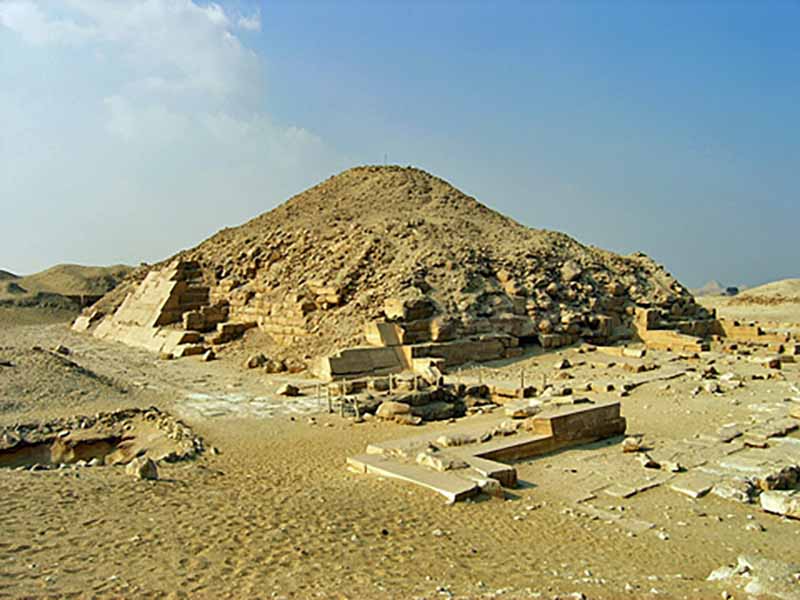 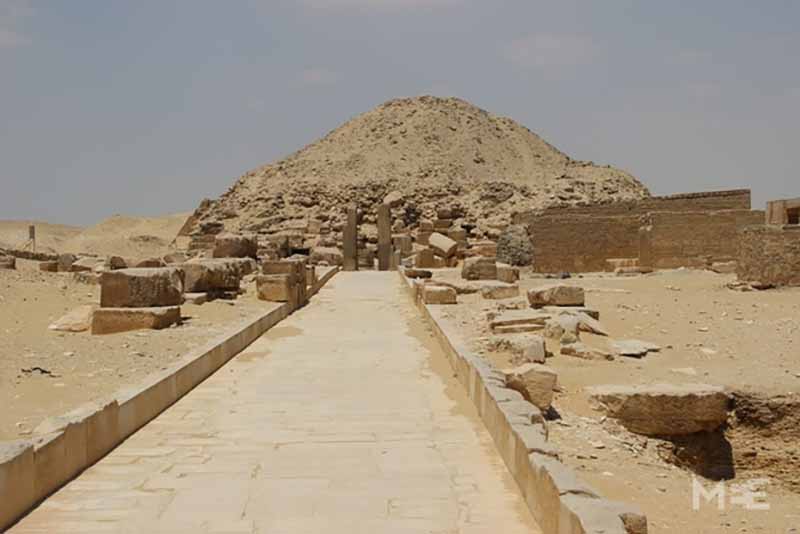 
The Pyramid Complex of Unas is located in the pyramid field at Saqqara, near Cairo in Egypt. The pyramid of Unas of the Fifth Dynasty (originally known as Beautiful are the places of Unas) is now ruined, and looks more like a small hill than a royal pyramid.

It was investigated by Perring and then Lepsius, but it was Gaston Maspero who first gained entry to the chambers in 1881, where he found texts covering the walls of the burial chambers, these together with others found in nearby pyramids are now known as the Pyramid Texts. In the burial chamber itself the remains of a mummy were found, including the skull, right arm and shin, but whether these belong to Unas is not certain. Near to the main pyramid, to the north east, there are mastabas that contain the burials of the consorts of the king.

Like all pyramids of the 5th dynasty, this one has dilapidated as well. Excavating teams have recently discovered a shaft which is probably the tomb of one of the later Persian invaders. West of the pyramid lies a grave that could probably hold the dead bodies of two second-dynasty pharaohs, namely Hor Hetepsechemui and Hor Raneb.

The walls of the causeway that connects the mortuary temple and the valley temple hold relief carvings which show scenes such as the transport of granite stones from Aswan, the making of pottery and the production of 'Electron,' the famous alloy of gold and silver.

The walls of the burial chamber are covered with hieroglyphs. They are magic formulas that are supposed to help the king's soul defeat enemies and difficulties on his way to the hereafter. 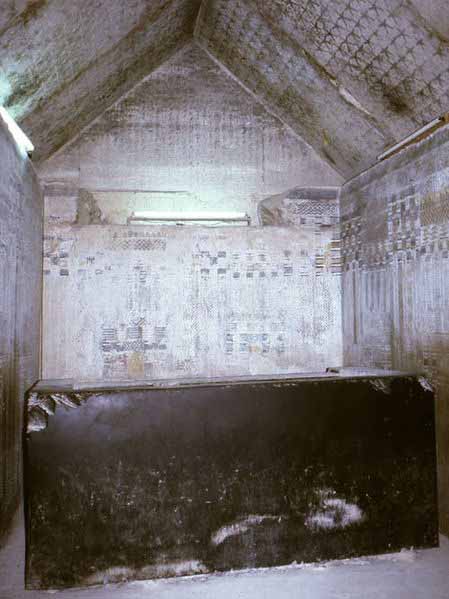 Beneath the rubble, in the burial chamber, we find one of the finest examples of
the Pyramid Texts inscriptions hewn in the polished stone walls and ceiling. 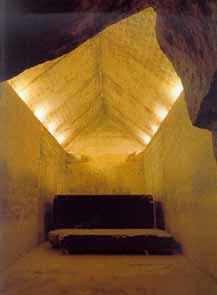 Rise up my father, great king
so that you may sit in front of them.
The cavern of the broad sky is opened to you
so that you may stride in the sunshine.
Stand up for me, Osiris, my father.
I am your son. I am Horus.
I have come that I might cleanse and purify you,
that I might preserve you and collect your bones.
I say this for you. 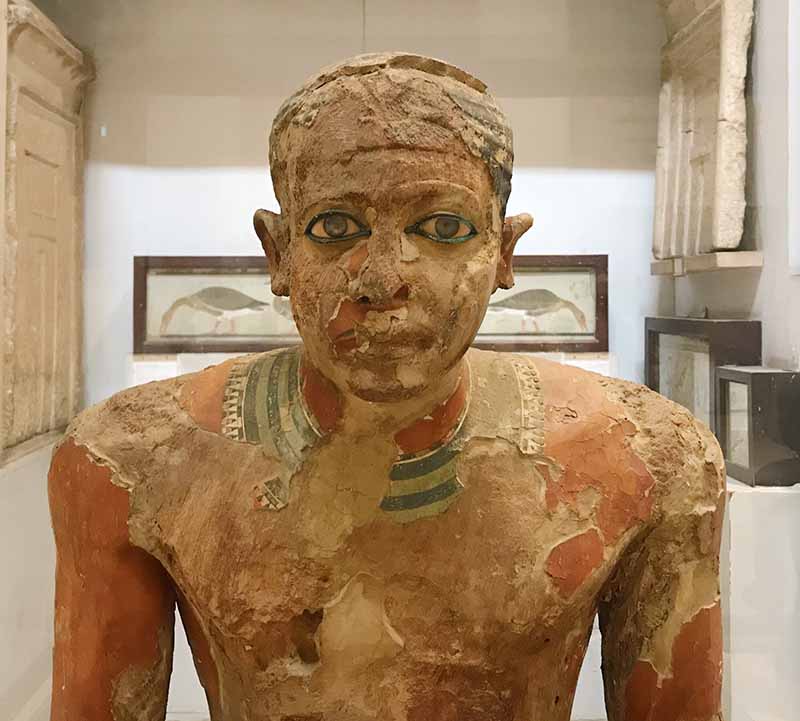 Unas was the ninth and last king of the 5th Dynasty and what some believe to be the end of the Golden Age of the Old Kingdom.

The 6th Dynasty would finally be the end of Egypt's grand beginning, as the country would then slip into the troubling First intermediate Period.

Unas (also Oenas, Unis, Wenis, or Ounas) was a Pharaoh of Ancient Egypt, and the last ruler of the Fifth dynasty from the Old Kingdom. His reign has been dated between 2375 BC and 2345 BC. Unas is believed to have had two queens, Nebet and Khenut, based on their burials near his tomb.

With his death, the Fifth dynasty came to an end, according to Manetho; he probably had no sons. Furthermore, the Turin King List inserts a break at this point, which "gives us some food for thought," writes Jaromir Malek, "because the criterion for such divisions in the Turin King List invariably was the change of location of the capital and royal residence."

However, there are several instances of uninterrupted continuity between the Fifth and the sixth dynasties: Kagemni, the vizer of Unas's successor Teti, began his career under Djedkare Isesi and Unas. Teti's queen, Iput, is believed to have been the daughter of Unas, which shows Teti, Nicolas Grimal argues, "made no conscious break with the preceding dynasty." The break between the two dynasties may have been more as an official act than in fact. The causeway of Unas's pyramid complex includes a bas relief showing how they transported a palm column by boat on the Nile.

According to the Pyramid Texts, he built a small pyramid at Saqqara, originally named "Beautiful are the places of Unas", close to the Step Pyramid of Djoser. It has been excavated by Vyse, Barsanti, Gaston Maspero, Firth, Selim Hassan, A. Husein, and Alexandre Piankoff. Its interior is decorated with a number of reliefs detailing events during his reign as well as a number of inscriptions.

However, Jaromir Malek considers "the main innovation of Unas' pyramid, and one that was to be characteristic of the remaining pyramids of the Old Kingdom (including some of the queens), was the first appearance of the Pyramid Texts". These texts were inscribed in Sixth Dynasty royal versions, but Unas's texts contains verses and spells which were not included in the later 6th dynasty copies. The pyramid texts were intended to help the king in overcoming hostile forces and powers in the Underworld and thus join with the Sun God Ra, his divine father in the afterlife. The king would then spend his days in eternity sailing with Ra across the sky in a solar boat.

Unas was his birth name, but he is also referred to as Unis, Ounas and Wenis. His Horus name was Wadj-tawy which means "Horus, the flourishing one of the Two Lands".

According to the Turin King list, Unas ruled for 30 years, or perhaps slightly more of part of the number is in the lacuna, which is confirmed by Manetho, who recorded 33 years. He probably ruled Egypt between 2375 and 2345 BC.

Wenis had two wives, Queen Nebet, who was the mother of Prince Wenisakh, and Queen Khenut. It has been proposed that Iput the first was his daughter. Both of Unas' Queens were buried in mastaba tombs outside of Unas' pyramid complex which, in itself is unusual since often in this period the Queens would be buried in smaller pyramids near their husband's.

His reign is not well attested therefore we know little about this king despite his fairly well preserved funerary complex at the southwest corner of the Step Pyramid of Djoser at Saqqara. It now lies in ruins on the Saqqara Plateau.

While Unas' pyramid is the smallest of the royal pyramids build during the Old Kingdom, it was the first that we know of to have its internal walls inscribed with the various (128) spells making up the Pyramid Text. The texts, meant to aid the pharaoh's soul on its journey to the next world, would adorn the walls of many future pyramids and tombs and is the earliest large religious composition known from ancient Egypt.

Unas' pyramid also established the typical plan of the internal chambers for pyramids that would be used through the end of the 6th Dynasty.

In death, King Unas is identified with the gods Ra and Osiris, and referred to as Osiris Unas. E. A. Wallis Budge, in his "The Gods of the Egyptians", also tells us that he was called Unas, the Slayer and Eater of Gods.

He was apparently worshipped around Saqqara for many years after his death.

Osiris was originally a local deity of the Eastern delta, but sometime around the reign of Unas his worship became much more widespread. We believe Maspero discovered parts of Unas' mummy in 1880, which are now in the Cairo Museum.

It is not believed that Unas left an heir, though he may have one time had a son named Ptahshepses, and therefore there was a short period of political instability prior to Teti, the first ruler of the 6th Dynasty, ascent to the throne. Teti's wife, Iput, was possibly a daughter of Unas, and his vizier Kagemni probably also worked under Unas. Furthermore, a pink granite gateway in Unas' mortuary temple bears the inscription of the names and titles of Teti, indicating that part of the temple was completed after Unas's death. This evidence suggests that there may not have been a true break between the 5th and 6th Dynasties.

We find scenes from his causeway that links his mortuary temple and valley temple depicting the moving by barge of granite columns from the quarries at Aswan to his mortuary temple, but we also find scenes of emaciated people. These latter scenes may show the effects of a famine that might have been the cause of the political decline that ended the Old Kingdom. There are also scenes of Asiatic traders arriving in Egypt by boat, perhaps from Byblos, as well as scenes of markets, hunting in the desert and a small vignette of desert life. We believe that Unas probably pursued a policy of diplomatic contact both with Byblos and Nubia. He also apparently was also responsible for building activities at Elephantine near modern Aswan, as well as Saqqara. At Elephantine, an inscription also shows a giraffe and other exotic animals that were apparently bought to Egypt during his reign. Another drawing found on a discovered vase shows battle scenes during his reign.

His name has been found in Elephantine, at the Southern border of Egypt (Aswan), and also on an alabaster vessel found in Byblos, the latter perhaps indicating some commercial or diplomatic activities between Egypt and the Near East during this period. He seems not to have left any apparent heirs after his death, which may have resulted in some political instability following his death.

An inscription raised at Elephantine shows a giraffe that was brought to Egypt with other exotic animals for ancient Egyptians, during Wenis' reign when successful trade expeditions were conducted with neighboring nations.