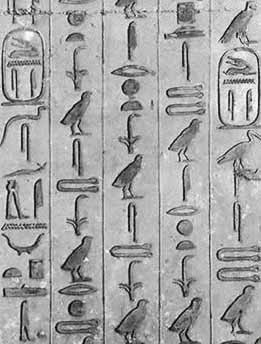 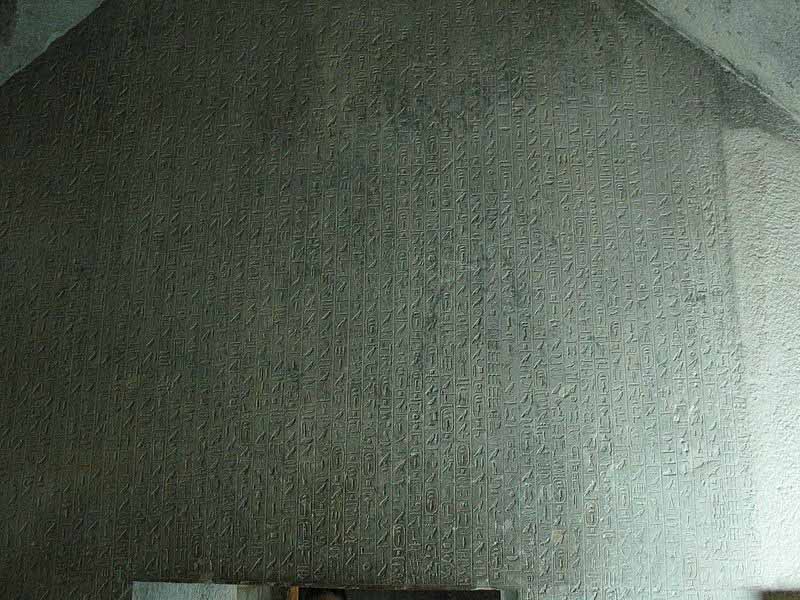 The Pyramid Texts are a collection of ancient Egyptian religious texts from the time of the Old Kingdom. The pyramid texts are possibly the oldest known religious texts in the world. Written in Old Egyptian, the pyramid texts were carved on the walls and sarcophagi of the pyramids at Saqqara during the 5th and 6th Dynasties of the Old Kingdom. The oldest of the texts have been dated to between ca. 2400-2300 BC.

Unlike the Coffin Texts and Book of the Dead into which parts of the pyramid texts later evolved, the pyramid texts were reserved only for the pharaoh and were not illustrated. Following the earlier Palermo Stone, the pyramid texts mark the next-oldest known mention of Osiris, who would become the most important deity associated with afterlife in the Ancient Egyptian religion.

The spells, or "utterances", of the pyramid texts are primarily concerned with protecting the pharaoh's remains, reanimating his body after death, and helping him ascend to the heavens, which are the emphasis of the afterlife during the Old Kingdom. The spells delineate all of the ways the pharaoh could travel, including the use of ramps, stairs, ladders, and most importantly flying. The spells could also be used to call the gods to help, even threatening them if they did not comply.

The texts were first discovered in 1881 by Gaston Maspero, and translations were made by Kurt Heinrich Sethe (in German), Louis Sleepers (in French), Raymond O. Faulkner, Samuel A. B. Mercer and James P. Allen (the latest translation in English).

The oldest version consists of 228 spells and comes from the Pyramid of Unas, the last king of the 5th Dynasty. Other texts were discovered in the pyramids of the 6th Dynasty kings Pepi I, Pepi II and three of his queens, and Teti. Kurt Sethe's first edition of the pyramid texts contained 714 distinct spells; after this publication additional spells were discovered bringing the total to 759. No single collection uses all recorded spells.


The Pyramid Texts are a collection of ancient Egyptian religious texts from the time of the Old Kingdom, mostly inscriptions on the walls of tombs in pyramids. They depict the Egyptian view of the afterlife, and the ascent into the sky of the divine Pharaoh after death. They were written upwards of five thousand years ago; thus, they are some of the oldest known writings in the world.

The Pyramid Texts are also the oldest collection of religious spells known to us from ancient Egypt. This collection forms the basis of much of the later religious theology and literature of ancient Egypt. The passages were eventually separated and categorized, as well as illustrated and eventually evolved into the Book of the Dead, or more properly, The Book of the Coming forth by Day.

The oldest of these text come from that Pyramid of Wenis, or more popularly these days, Unas at Saqqara. However, the first Pyramid Text that were actually discovered were from the Pyramid of Pepy I.

This collection forms the basis of much of the later religious theology and literature of ancient Egypt. From Unas, the last king of the 5th Dynasty, varying selections of spells were carved in all the royal pyramids of the Old Kingdom, particularly the sarcophagus chamber and antechamber. There were some 227 spells in the Pyramid of Unas, and each subsequent pyramid provided fresh new additions, though no single pyramid contained the whole collection of spells.

The maximum number was 675 utterances from the pyramid of Pepy II. With Teti's pyramid, the text also appeared on the sarcophagus itself, and in the pyramid of Pepy I the inscriptions extend beyond the antechamber. During the rule of Pepy II we begin to find the text in the tombs of queens, and after the Old Kingdom, they even appear on the walls and coffins of officials. Specifically, in the Old Kingdom the text appears in the pyramids of Unas, Tei, Pepy I, Merenre I, Pepy II and Ibi, along with those of queens Wedjebten, Neith and Iput.

It is difficult to date the Pyramid Texts. Their origins have aroused much speculation regarding their origin because they emerge, as a fully-fledged collection of mortuary texts, without any precedent in the archaeological record. The fact that the texts are made up of distinct utterances which do not have a strict narrative sequence linking them together has led scholars to believe that many of them were not composed specifically for the purpose of being inscribed in the pyramids but may have had earlier uses.

In fact, spells such as Utterances 273-4, called the Cannibal Hymn, and which only appears in the Pyramids of Unas and Teti, refer to aspects of the funerary cult that seem to no longer been in practice at the time the pyramids were built.

Early analysts attempted to date the text as early as possible; even from the predynastic period. A very early dating of these texts remains a strong possibility, though today, scholars place the text's origins with the date of the monuments where they reside. In reality, we have very little idea of the date of their initial invention, perhaps other than the antiquated language employed.

What might also be called Pyramid Spells, were discovered when Gaston Maspero was working on the pyramid of Teti. He began publishing translations of the text as early as 1882, starting with those of Unas. Kurt Sethe also published pyramid texts in his "Dictionary of the Egyptian Language" in 1899.

In 1924, a further translation was rendered by Louis Spleleers in French. Gustave Jequier advanced our knowledge of pyramid text considerably during his investigations in southern Saqqara between 1924 and 1936.

He added many spells from the pyramid of Pepy II, and also discovered the versions in the pyramids of Wedjebten, Neith, Iput and Ibi. A systematic investigation of the 6th Dynasty pyramids was initiated by Jean-Philippe Lauerand Jean Sainte-Fare Garnot in 1951. Later, Lauer teamed with Jean Leclant to unearth an additional 700 spell fragments from the tomb of Teti and over 2,000 more from that of Pepy I.

In 1952, Samuel A. B. Mercer delivered a full English translation of the text then known, but that has since been superseded by a translation of Raymond O. Faulkner. In addition, the extensive commentaries and translations of Sethe were published after his death, appearing between 1935 and 1962.

The Pyramid Text differ considerably in length, and were not illustrated. Individual spells are not titled, with the sole exception of spell 355, the "Opening the Double Door of the Sky". The individual signs are outlined in green, hopeful for the regeneration of the deceased. Each column begins with a notation 'words to be spoken', though in the tomb of Unas this only appears at the beginning of the composition.

The spells are separated by a hieroglyph for house, in all the pyramids with the exception Unas, where they are marked by a horizontal line. All together, Sethe found 714 spells, while Faulkner increased the number to 759, though with some duplicates. We call these spells, 'utterances', because we believe they were meant to be spoken by priests in the course of the royal mortuary rituals. They are usually numbered by their position within the pyramid, progressing from the burial chamber outward.

We are not really sure in which order the spells are to be read. Sethe started with the north wall of the sarcophagus chamber, but other scholars such as Siegfried Schott and Alexandre Piankoff thought they began at the entrance to the antechamber. There seems no correlation with the text and the four coordinal points. In fact, considerable debate exists as to their actual use and the associated rituals, though there seems to be no question of their ritualistic content. It has been assumed that they were selected from a larger collection of spells for very specific reasons and arranged according to a distinctive point of view

The language, while Old Egyptian, does seem antiquated, displaying differences from other text of the period, including highly redundant language. It is the earliest use of what is referred to as retrograde writing, where the normal sequence of columns is reversed. There is an avoidance of complete figures of animals and people, believed due to the fear that such signs might come to life and pose a danger.

The main theme in the Pyramid Texts is the king's resurrection and ascension to the Afterworld and this is described in many different ways. In some of the texts, the king boards the sun-boat of Re and passes through different regions in the sky, encountering many gods. In other texts, the king reaches the sky by flying up as a bird, such as a falcon or a goose. At other times the king climbs up the ladder of the sky. What all these texts have in common is an emphasis on the eternal existence of the king and the location of the sky as the realm of the Afterlife, which is dominated by the sun-god Re. The night sky is also described, particularly the imperishable stars.

Generally, the text is supposed to provide services to the deceased king in his ascent into the sky and with his reception in the world of the divine. Every possible means is given for this assistance, including a ladder or ramp leading to the sky, clouds, storms hail, incense and sunlight. The god, Shu, who holds up the sky is there for his assistance, while the text communicates knowledge to the pharaoh of the customs and places in the hereafter. It also warns him of dangers. There are dialogues with gatekeepers and ferryman where the king is given the specific knowledge that he will need in order to name the correct names and answer all the questions needed to prove his legitimacy and make his way though the afterlife.

Many of the locations remain unclear to us, but the Field of Reeds, the Field of Offerings, the Lake of the Jackal and the Winding Waterway are clearly important. The waterways of the heavens are navigated by boat, so the king is dependent on the efforts of his ferryman. Though the afterworld is celestial in nature, it does not seem to be all that desirable of a place to stay. Not even Re is happy here, only seemingly able to bear out the time before sunrise when he could be freed. The king arrives in this realm violently, and then is repeatedly identified with the creator god Atum.

There are many references to various problems such as repelling the attacks of various supernatural beings and we find, for example in spell 244, the "smashing of the red pots" specifically intended to annihilate one's enemies. But more mundane topics are also approached. On earth, the king had needed a boat to travel throughout Egypt along the Nile; in the next world, he would need a boat as well. Some of the prayers call for food and provisions; some assert that the king will not lose the power of his limbs, that he will still move, breathe, eat, and copulate in the next world.

We find an expressed plea for the king to overcome death by entering the eternal course of the cosmos together with the sun god in his solar barque, but we also find the king with a strong, general association with Osiris. Here, we find the earliest known reference to Osiris as the ruler of the underworld. In spell number 239 this relationship is especially evident, and we find considerable reference to the Osiris legend.

Almost all of the myth's elements may be found within this text. Osiris' son, Horus, along with Osiris' two sisters, Isis and Nephthys, search for the murdered god (Osiris). Horus finds his father and revives him. It also provides a version of the contention of Horus and Seth.

A number of specifically ritualistic text stand out, such as the 'Opening of the Mouth' ceremony, which to the best of our knowledge is here presented for the first time. There are also offering and statue rituals.