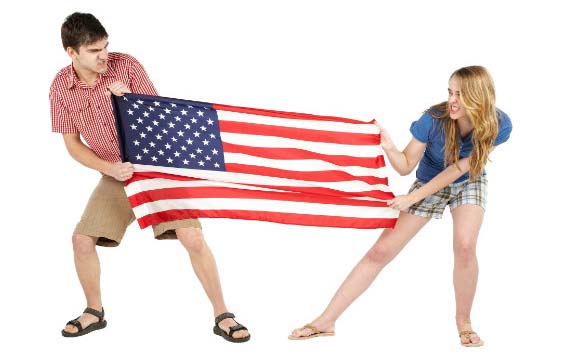 Many people are attracted to partners who have very different political beliefs. How these difference effect your relationship depends on the intensity of one's political views. This goes to conspiracy theories and more in today's world where secrets seem to surface unexpectedly taking down politicians and exposing corruption, not only in the political arena, but in the economic sector. Systems are broken and people know it. Regardless of one's political beliefs, if the truth is not exposed, it doesn't matter what candidate or platform one supports - it will fall.

People who like drama, and find the need to debate about politicians and issues, will go on and on pontificating about what is right and wrong. Others will make their statement and allow life to run its course because ... as most of us have already discovered ... those in power may think they run things but they don't. What's important in this reality is finding the truth after centuries of deception.


Today's contentious and partisan political environment may improve mate selection as researchers determine most people marry only those whose political views align with their own. Given the acrimony between political parties, discovering political values should not be a difficult task.

In a 2011 study, researchers determine political alignment may be more important that physical appearance or personality when selecting a mate. In the study, Rice University and the University of Nebraska-Lincoln researchers discovered political attitudes were among the strongest shared traits and even stronger than qualities like personality or looks.

Investigators examined physical and behavioral traits of more than 5,000 married couples in the United States and found that spouses in the study appeared to instinctively select a partner who has similar social and political views. It turns out that people place more emphasis on finding a mate who is a kindred spirit with regard to politics, religion and social activity than they do on finding someone of like physique or personality.

Researchers compared spousal traits using a scale of 0 to 1, where 1 means the common traits were perfectly matched among partners. They discovered physical traits (body shape, weight and height) only score between 0.1 and 0.2 among spouse pairs. Personality traits, such as extroversion or impulsivity, are also weak and fall within the 0 to 0.2 range. However, the score for political ideology is more than 0.6, higher than any of the other measured traits except frequency of church attendance, which was just over 0.7.

The study adds to recent sorting research that has uncovered a surprising level of uniformity in Americans' personal political communication networks - where they live, with whom they socialize and where they work. The new research shows that this sorting doesn't stop with the selection of neighborhoods or workplaces, however. It's also visible in choice of spouses. It suggests that, perhaps, if you're looking for a long-term romantic relationship, skip "What's your sign?" and go straight to "Obama or Romney?" If you get the wrong answer, just walk away.


What we can learn about relationships from politically divided couples   CNN - October 23, 2012
The first sign of their political differences surfaced on the first date, when she noticed the photo on his wall of him posing and smiling with George H.W. Bush.

He was a 30-year-old petty officer in the Navy and a Southern Baptist from Georgia. She was from a liberal family in San Diego, a 19-year-old who had protested military recruitment on her high school campus.

Still, he was charming and handsome, so she gave him a chance. Though he identified as a Republican and she as a Democrat, they agreed on social issues that she considered deal breakers, like supporting abortion rights. They've been happily married for 14 years now, but the ideological differences still come to a head during election years.

"We have our differences and it really becomes apparent in election time. That's usually when it gears up, when everything comes to the forefront," said Melissa Reylek-Robinson, a 34-year-old mother of two in San Diego. "Election time is probably the worst time for us. We definitely get into some heated debates."

For many, political loyalties can make or break a relationship. But couples who have learned to successfully weather political partisanship could teach us all a thing or two about relationships in general, said etiquette expert Anna Post.

"These are admirable couples. It takes a lot of patience and passion and respect for the relationship, especially where large political divides exist," said Post, spokeswoman for the Emily Post Institute and great-great-granddaughter of Emily Post. "To be able to do that successfully speaks to the kind of relationship these couples have."

Political differences don't always lead to political discord, she said, and shouldn't be considered insurmountable. If Democrat James Carville and Republican Mary Matalin can talk along party lines on television as full-time jobs, others can learn to do it in small doses.

"It has to do with the tone of the conversation and knowing why you're having it," she said. "It's not about what the differences are. It's how you choose to bridge them that will create a problem or make things work smoothly, knowing how to have a dialogue and which boundaries not to push or cross."

As a devout Christian and Republican who's also a Colts fan, Janet Davis is rarely on the same side as her significant other, an atheist Democrat who roots for the Patriots. After years of loud fights, it took the birth of their son to mellow them out.

"How do we do it? Very, very carefully," she said. "No one really ever wins in a battle of personal beliefs. Since the birth of our son in 2005 we are both much more respectful of each other's viewpoints."

Life-changing events like births or deaths can change a couple's perspective on what really matters in their relationship, said marriage and family therapist Sharon Rivkin.

"It's such a powerful experience that's bigger than the both of them," said Rivkin, author of "Breaking the Argument Cycle." "For many people, that's when they learn to respect each other, when you get down to the nitty-gritty of what's important."

If a couple can coexist with different political views, it creates a foundation for a healthy and long-lasting relationship, psychotherapist Karen Ruskin said, because they've learned to see each other as two individuals within a relationship.

It's not easy, she acknowledged, and probably impossible for someone who needs to always be right. It's a matter of learning to not be threatened by another position and accepting that what works for your partner doesn't have to work for you.

Again, James Carville and Mary Matalin come to mind, she said. Their careers have grown over the years together even as they've worked on different sides of the aisle.

Reylek-Robinson has learned to live with the "the giant Bush in the room," as she likes to call her husband's photograph. He tolerates the fridge magnet she uses to display her children's homework depicting George W. Bush and his infamous quote, "Rarely is the question asked, 'Is our children learning?' "

This year, the hot-button issue has been President Obama's Affordable Care Act, she said. As someone who has epilepsy, she said she supports "Obamacare" even though she has coverage through her husband.

"I have way too many pre-existing conditions and no one would touch me with a 10-foot pole if I didn't have his coverage. I wouldn't be able to afford all the medication I need if I had to get insurance without the Affordable Care Act," she said.

Her husband doesn't think it should be mandatory, "but we just agree to disagree." "The fact that I believe in (government-mandated) health care and he doesn't is not something I'm going to divorce him over," she said. "At the end of the day you have to realize that you love the person for things other than their political beliefs."