This story really caught my 'eye', and I totally connected with her. Metaphors including Persia, (Zoroaster the Persian Prophet), priestess, soothsayer, 6 feet, golden eye and the eye. 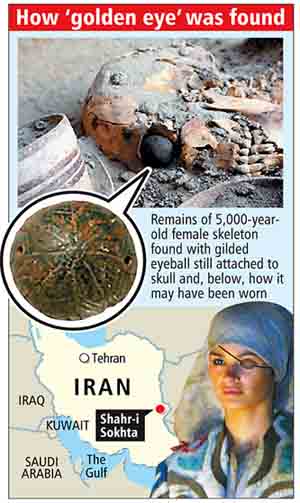 The body of a strikingly tall 5,000-year-old woman with an artificial golden eye has been discovered in Iran. Archaeologists said the woman was a female soothsayer or priestess and would have transfixed those around her with her eyeball, making them believe she had occult powers and could see into the future. The 25-30-year old Persian woman, who was almost 6 feet tall, was also buried with an ornate bronze hand mirror so she could check her startling appearance. The golden eyeball is engraved with lines coming out of a central circle like rays of light. 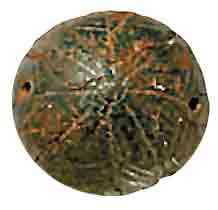 It is a half-sphere with a diameter of just over an inch and made from lightweight material thought to be derived from bitumen paste, which is painted gold. There are two tiny holes drilled on either side of the eyeball, through which a fine thread held it in place. Historians said an imprint on the woman's eye socket proved she wore the golden eye in life, rather than having it placed in her eye at burial.