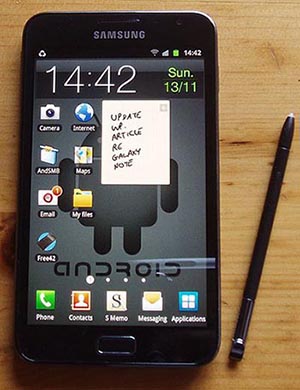 A phablet is a smartphone form factor which typically comprises devices with a screen between 5.0 to 6.9 inches in size, designed to combine or straddle the functionalities of a smartphone and tablet, eliminating the need for two devices. In early 2013, The Wall Street Journal described the devices as "typically hybrids of smartphones and small tablets with a screen size of five to seven inches." The term itself, a portmanteau of the words phone and tablet came into common usage in 2008.

The phablet's larger screen can complement screen-intensive activity such as mobile web browsing and multimedia viewing - and the device may include, as with Samsung's Galaxy Note, software optimized for an integral self-storing stylus to facilitate sketching, note-taking and annotation. While Samsung's Galaxy Note (5.3-inch) is largely credited with pioneering the worldwide phablet market when launched in 2011, international markets now includes larger phablets such as the dust-proof water-resistant pencil-compatible Sony Xperia Z Ultra (6.44 inch), and Asus FonePad (7 inch).

In a 2013 analysis, Engadget identified dropping screen prices, increasing screen power efficiency, increasing battery life and the evolving importance of multimedia viewing as critical factors in the popularity of the phablet.

In 2012, Forbes Magazine noted that while most clothing cannot hold a typical tablet computer, men's clothing in particular could and may well adapt to accommodate phablets. Doug Conklyn, vice president of global design for Dockers told Fox News said the company reworked the size of its pants pockets "to accommodate the growing size of smartphones."


Galaxy Mega: New 6.3-inch Samsung phone approaches tablet size   PhysOrg - August 20, 2013
Smartphones are getting bigger as people use them more to watch movies and play games. A new one from Samsung is beyond big. With a screen measuring 6.3 inches (16-centimeter) diagonally, the Galaxy Mega is almost as big as a 7-inch tablet computer. The difference: It makes phone calls. Samsung says the Mega is a hybrid that combines the portability of a smartphone with the immersive experience that a tablet offers for movies, books, music and games. Phones of this size are typically referred to as phablets.