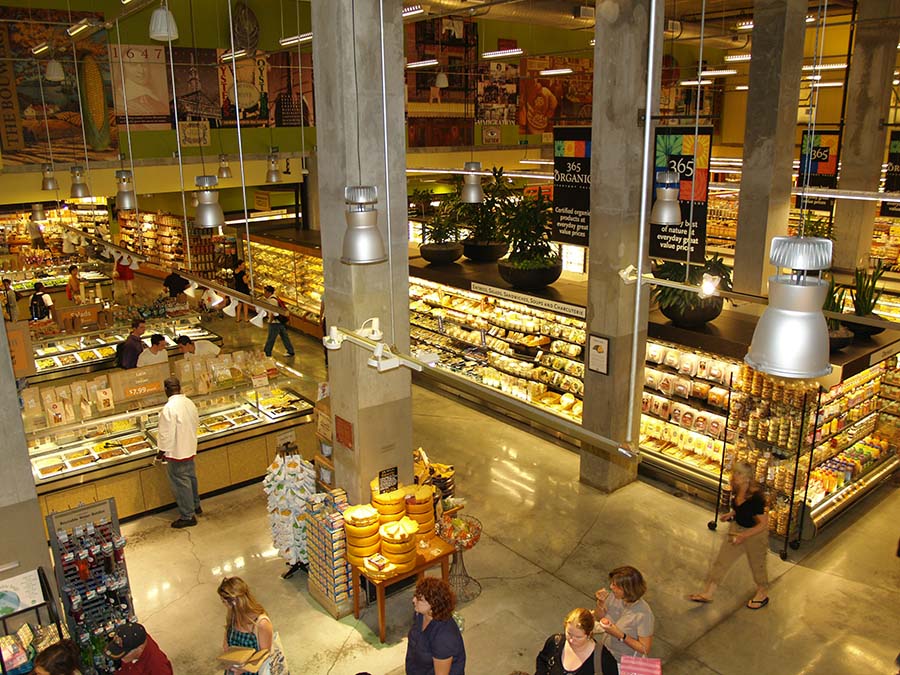 At age 70, I am totally healthy and see "food" as the things we eat for physical and emotional sustenance and pleasure. From basics to guilty pleasures - food is part of the human experience, and like everything else, we all have different needs and tastes. On the matter of organic vs. conventional food, I never stop and shop for organic or speciality products, though they are readily available in my neighborhood in Brooklyn, NY, where people do yoga, exercise, try endless ways to reduce stress, and organic products remain in vogue.

We've got it all from food co ops, farmer's markets in season, Whole Foods, to rooftop farming, and more. I prefer anything that is fresh grown, but even those products can leave a lot to be desired. Eating is common sense and based on one's health. If products are free of synthetic pesticides and chemical fertilizers, naturally they will be healthier, probably taste better ... and definitely be more expensive. It's all about keeping yourself in balance ... that's it! 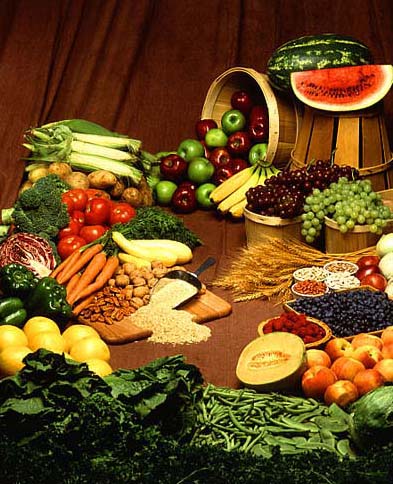 Natural foods and 'all natural foods' are widely used terms in food labeling and marketing with a variety of definitions, most of which are vague. The term is assumed to imply foods that are minimally processed and do not contain manufactured ingredients, but the lack of standards in most jurisdictions means that the term assures nothing. The term 'organic' has similar implications and has an established legal definition in many countries and an international standard. In some places, the term 'natural' is defined and enforced. In others, such as the United States, it has no meaning. 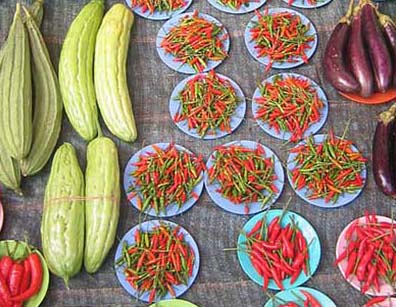 Organic foods are foods that are produced using methods of organic farming - that do not involve modern synthetic inputs such as synthetic pesticides and chemical fertilizers. Organic foods are also not processed using irradiation, industrial solvents, or chemical food additives. The organic farming movement arose in the 1940s in response to the industrialization of agriculture known as the Green Revolution. Organic food production is a heavily regulated industry, distinct from private gardening. Currently, the European Union, the United States, Canada, Japan and many other countries require producers to obtain special certification in order to market food as organic within their borders. In the context of these regulations, organic food is food produced in a way that complies with organic standards set by national governments and international organizations.

Evidence on substantial differences between organic food and conventional food is insufficient to make claims that organic food is safer or more healthy than conventional food. With respect to taste, the evidence is also insufficient to make scientific claims that organic food tastes better.Many supporters of the organic foods movement believe that pesticides, herbicides and artificial additives found in non-organic food might be carcinogenic. The American Cancer Society (ACS) has said "whether organic foods carry a lower risk of cancer because they are less likely to be contaminated by compounds that might cause cancer is largely unknown" but "vegetables, fruits, and whole grains should form the central part of a person's diet, regardless of whether they are grown conventionally or organically".

Once found only in health food stores, organic food is now a regular feature at most supermarkets. And that's created a bit of a dilemma in the produce aisle. On one hand, you have a conventionally grown apple. On the other, you have one that's organic. Both apples are firm, shiny and red. Both provide vitamins and fiber, and both are free of fat, sodium and cholesterol. Which should you choose? Conventionally grown produce generally costs less, but is organic food safer or more nutritious? Get the facts before you shop. 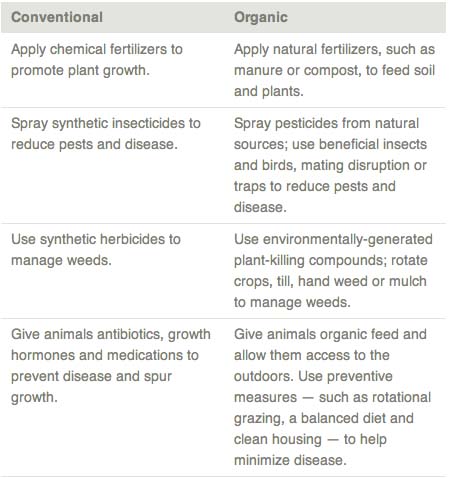 Organic or not? Check the label -- The U.S. Department of Agriculture (USDA) has established an organic certification program that requires all organic foods to meet strict government standards. These standards regulate how such foods are grown, handled and processed. Any product labeled as organic must be USDA certified. Only producers who sell less than $5,000 a year in organic foods are exempt from this certification; however, they're still required to follow the USDA's standards for organic foods. If a food bears a USDA Organic label, it means it's produced and processed according to the USDA standards. The seal is voluntary, but many organic producers use it.

Products that are completely organic - such as fruits, vegetables, eggs or other single-ingredient foods - are labeled 100 percent organic and can carry the USDA seal.

Foods that have more than one ingredient, such as breakfast cereal, can use the USDA organic seal plus the following wording, depending on the number of organic ingredients:

"Natural" and "organic" are not interchangeable terms. You may see "natural" and other terms such as "all natural," "free-range" or "hormone-free" on food labels. These descriptions must be truthful, but don't confuse them with the term "organic." Only foods that are grown and processed according to USDA organic standards can be labeled organic. 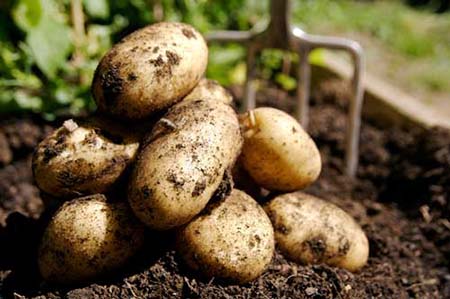 The Health Halo Effect is the perception of health-related qualities in one thing gives rise to the perception of similar qualities in related things. It happens to be one of my pet peeves as a Registered Dietitian and something I feel strongly enough about to share with you. Perception is not reality. In fact organic foods do not have more nutrients than their non-organic counterparts, or conventional foods. Overall, studies show that organic and conventional foods are about the same from a nutritional standpoint.

The use of organic farming practices may encourage soil and water conservation and reduce pollution which can be healthier for the environment but this does not translate to making the food any more nutritious. Organic produce is also more expensive than conventional produce. As a majority of Americans are not eating enough fruits and vegetables to meet recommendations for health and since the nutrients in organic and conventional foods are the same, it makes sense and cents to promote conventional foods until all Americans are eating enough fruits and vegetables. After all, eating these foods will help protect us from the chronic diseases that are today's leading causes of death - heart disease and stroke, cancer, diabetes and obesity.

That effect, where consumers overvalue the benefits of organic foods, was shown in research by Cornell University's Food and Brand Lab researchers Wan-chen Jenny Lee, Mitsuru Shimizu, Kevin Kniffin and Brian Wansink. In that research, 115 people were recruited from a shopping mall in Ithaca, N.Y. Each of those shoppers was then asked to evaluate three pairs of products. The catch was that one of those products was labeled organic while the other was not. However, both pairs of yogurt, cookies and potato chips used in the study were identical.

Consumers were not able to make the distinction between the products and rated organically labeled food lower in fat, more nutritious, more appetizing and more flavorful. The only difference came when consumers rated cookies not labeled organic as tasting better. Those attitudes go a long way in explaining why consumers are willing to pay more for organic products than others, researchers say.

"The study found that people tend to assume that organic foods are good for everything (e.g., low calorie, more fiber), so they tend to pay more for organic foods," said Shimizu, a postdoctoral research associate at the Dyson School of Applied Economics and Management at Cornell. This effect is stronger among those who rarely buy organic foods or those who do not pay attention to the nutrition labels.