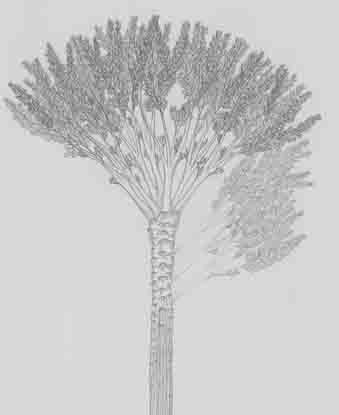 If you've read Sarah and Alexander you know about the significance of upstate NY and The Tree. The articles below are laced with metaphors linked to my book. It's about a town in the Catskill Mountains where they found the stump of a tree that represent the earliest known forest. The town is Gilboa (gill, fish and boa, snake, Gilgamesh). "The name "Gilboa" is from a location in Israel." Earth's oldest known tree stood nearly 30 (3) feet tall and looked like a modern palm, a new reconstruction shows. The upright stumps of the fossilized trees were uncovered after a flash flood (flood stories) more than a century ago. However, until now, no-one has known what the entire trees looked like.

In 2004, scientists unearthed a 400-pound fossilized top or crown of the same genus a few miles away. The following summer, the same team discovered fragments of a 28-foot trunk. Piecing together stump, trunk and crown now reveals what the full tree looked like for the first time.

Earth's oldest known tree stood nearly 30 feet tall and looked like a modern palm, a new reconstruction shows. Workers uncovered hundreds of upright stumps of the 385 million-year-old tree more than a century ago, after a flash flood in Gilboa, New York uncovered them, but little else was known about the tree's appearance. Then, in 2004, scientists unearthed a 400-pound fossilized top - or crown - of the same genus a few miles away. The following summer, the same team discovered fragments of a 28-foot trunk. Piecing together stump, trunk and crown now reveals what the full tree looked like for the first time. The tree belonged to a group of early fern-like plants called Wattieza. Unlike flowering plants, which use seeds to reproduce, Wattieza used spores, the reproductive method of choice for algae, ferns and fungi.

The world's earliest forest may have been filled with slender trees that were three stories tall and capped with branches that resembled bottlebrushes. That's the picture painted by two newfound fossils that are providing unprecedented insight into the appearance and ecology of the first known forest, according to a new study. "What it looks like is a palm tree, or perhaps a tree fern," said the study's lead author, paleobotanist William Stein at Binghamton University in New York. "It's a kind of morphology that's instantly recognizable among some modern groups [of trees]," he added. The bottlebrush-like branches likely used photosynthesis, as most modern plants do, and produced spores, Stein said. The trunk, found in southeastern New York State, is identical to 385-million-year-old fossilized stumps discovered in the nearby town of Gilboa about a century ago. The stumps represent the earliest known forest.

Until now, however, scientists could only speculate what type of tree the Gilboa stumps, designated Eospermatopteris, represented. "What we found in the last couple of years was evidence of what the top of these things looked like," Stein said. The new fossils indicate that the fossil trees belong to a previously known plant group called cladoxylopsids, Stein said. Scientists suspected the fernlike cladoxylopsids were large, but experts never had more than the branches to work with, Stein added. "What we got here is like a double whammy," he said. "On the one hand, we know Eospermatopteris is these great stumps. On the other hand we have real evidence for how big the cladoxylopsids actually were."

Brigitte Meyer-Berthaud is a paleobotanist with the National Center for Scientific Research in Montpellier, France. She said the new fossils are surprising because they indicate Earth's first trees evolved without the aid of leaves and horizontal branches. "It was probably so advantageous to be bigger than the others that they achieved [height] even if they didn't have the proper organs," she said. Meyer-Berthaud, who co-authored an accompanying article on the new research, identified in 1999 a different type of tree called Archaeopteris as the earliest modern tree.

These trees, which date to around 385 million to 359 million years ago, had horizontal branches, leaves, and an extensive root system. Such structures are considered important to achieve treelike stature and are common to most trees in temperate and tropical areas today. The Gilboa forest dates to 385 million years ago, and the group of cladoxylopsids that includes the Gilboa trees was widespread around the world from about 385 million to 400 million years ago. Stein noted that these early trees played a major role in establishing Earth's first terrestrial ecosystems. "Trees really dominate those kinds of environments they're found in. They really are the entire fabric in which an entire ecology fits in a terrestrial realm," he said.

How Ancient Forests Looked -- Understanding the full appearance of the Gilboa trees allows scientists to infer what the entire forest ecosystem was like. For example, since the Gilboa trees lacked leaves, sunlight would have filtered down to the forest floor. And the trees, like modern palms, likely dropped their branches on a yearly or seasonal cycle, filling the forest floor with woody litter suitable for arthropods such as spiders and insects. The trees also would have removed carbon dioxide from the atmosphere, causing global temperatures to drop, Stein added. The traits of the Gilboa trees are found in many tree types throughout history, he noted. "The traits cannot all be traced back to the same common ancestor, so it's clearly a recurrent evolved form," he said. "The reason for that is probably ecology, probably something to do with a way of being a large tree or a large plant. It's one way to do it, and it is now clearly the oldest way," he added.