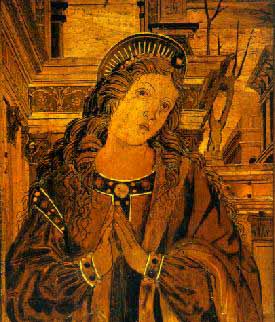 In our current timeline - one wonders if Mary Magdalene was the wife of Jesus - and had a daughter with him named, Sarah - thus perpetuating the bloodline.

Mary Magdalene was the most important woman disciple in the movement of Jesus. Tradition has labeled her a prostitute, but there is nothing in the Bible to support this view and much to dispute it.

Mary Magdalene, which probably means "Mary of Magdala", a town on the western shore of the Lake of Tiberias, is described in the New Testament as a follower of Jesus both in the canon and in the apocrypha. Nothing is known about her outside of Scripture. Her feast day is July 22.


Mary Magdalene in the Canon

For part of her story, Catholics and Protestants agree: She is mentioned in Luke 8:3 as one of the women who "ministered to Christ of their substance". Their motive, according to the author of Luke was that of gratitude for deliverances he had wrought for them: Luke tells that out of Mary were cast seven demons, in an exorcism. These women accompanied him also on his last journey to Jerusalem (Matt. 27:55; Mark 15:41; Luke 23:55). They were witnesses to the Crucifixion.

There Mary remained until all was over, and the body was taken down and laid in a tomb prepared for Joseph of Arimathea. Again, in the earliest dawn of the first day of the week she, with Salome and Mary the mother of James, (Matt. 28:1; Mark 16:2); Peter 12), came to the sepulchre, bringing with them sweet spices, that they might anoint the body of Jesus. They found the sepulchre empty but saw the "vision of angels" (Matt 28:5). As the first witness to the Resurrection, Mary Magdalene hastened to tell Peter and another - unknown - apostle, (John 20:1, 2), (gaining her the epithet "apostle to the apostles") and again immediately returned to the sepulchre.

There she lingered thoughtfully, weeping at the door of the tomb. The risen Lord appeared to her, but at first she knew him not. His utterance of her name "Mary" recalled her to consciousness, and she uttered the joyful, reverent cry, "Rabboni". She would fain have clung to him, but he forbade her: "17 Jesus said to her, 'Do not cling to Me, for I have not yet ascended to My Father; but go to My brethren and say to them, "I am ascending to My Father and your Father, and to My God and your God."'"

This is the last entry in the canonic New Testament regarding Mary of Magdala, who now returned to Jerusalem.


The Gospel of Mary

Further attestation of Mary of Magdala and her role among some early Christians is provided by the apocryphal Gospel of Mary Magdalene. which survives in two 3rd century Greek fragments and a longer 5th century translation into Coptic. Tellingly, in the Gospel the testimony of a woman first needed to be defended. All of these manuscripts were first discovered and published between 1938 and 1983, but as early as the 3rd century there are Patristic references to the Gospel of Mary. These writings reveal the degree to which the gospel was despised and dismissed by the early church fathers. In the fragmentary text, the disciples ask questions of the risen Savior (a designation that dates the original no earlier than the 2nd century) and are answered.

Then they grieve, saying, "How shall we go to the Gentiles and preach the Gospel of the Kingdom of the Son of Man? If even he was not spared, how shall we be spared?" And Mary Magdalene bids them take heart: "Let us rather praise his greatness, for he prepared us and made us into men." She then delivers - at Peter's request - a vision of the Savior she has had, and reports her discourse with him, which shows Gnostic influences.

Her vision does not meet with universal approval:

"But Andrew answered and said to the brethren, 'Say what you think concerning what she said. For I do not believe that the Savior said this. For certainly these teachings are of other ideas."

"Peter also opposed her in regard to these matters and asked them about the Savior. "Did he then speak secretly with a woman, in preference to us, and not openly? Are we to turn back and all listen to her? Did he prefer her to us?"

Karen King has observed, "The confrontation of Mary with Peter, a scenario also found in The Gospel of Thomas, Pistis Sophia, and The Gospel of the Egyptians, reflects some of the tensions in second-century Christianity. Peter and Andrew represent orthodox positions that deny the validity of esoteric revelation and reject the authority of women to teach."


Expansion of the Mary Magdalene tradition

Tradition as early as the 3rd century identified as Mary Magdalene the woman who was a sinner in Luke 7:36-50:"

37 And, behold, a woman in the city, which was a sinner, when she knew that Jesus sat at meat in the Pharisee's house, brought an alabaster box of ointment,

38 And stood at his feet behind him weeping, and began to wash his feet with tears, and did wipe them with the hairs of her head, and kissed his feet, and anointed them with the ointment."

Though there is no connection made in the New Testament, nor is the woman in the house of the Pharisee given a name, the idea that Mary was "the woman who was a sinner", or that she was unchaste, was developed by the Patristic writers of the 3rd and 4th centuries. This idea is rejected by most Protestants. Catholics, on the other hand, consider this one person to be, not only the sinner of Luke 7:36-50 but also Mary of Bethany, the sister of Martha and the resurrected Lazarus (Luke 10:38-42 and John 1:10); although the Roman Catholic Church withdrew from this linkage at the Second Vatican Council (1969) it survives strongly in folk Catholicism.

For some Christians, the idea developed by Church fathers, that Mary is also the woman that Jesus had rescued from being stoned to death (as recounted in the Pericope Adulterae) still holds true. However those critical scholars who are drawing conclusions from the canonic texts alone believe that the woman Jesus rescued and Mary were two separate persons. Conservative early-19th century theological traditions, vividly realized in the Mel Gibson movie The Passion of the Christ, portray the prostitute and Mary as the same person, and Martin Scorsese's earlier film adaptation of Nikos Kazantzakis's novel The Last Temptation of Christ followed a similar tradition.

As a Roman Catholic saint, Mary Magdalene's relics were venerated at Saint Maximin la Sainte Baume, Provence, and attracted such throngs of pilgrims that the great Basilica was erected there from the mid thirteenth century, one of the finest Gothic churches in the south of France. Though her bones were scattered at the French Revolution, her head is said to remain in her shrine in a cave at La Sainte-Baume near Marseille, although another medieval tradition holds that she died in Ephesus and was buried in Constantinople.

The Magdalene became a symbol of repentance for the vanities of the world, and Mary Magdalene was the patron of Magdalene College, Cambridge (pronounced "maudlin", as in weepy penitents). Unfortunately her name was also used for the infamous Magdalen Asylums in Ireland where supposedly fallen women were treated as slaves.

Some modern writers, notably the authors of the 1982 Holy Blood, Holy Grail (2003) and Dan Brown in the novel