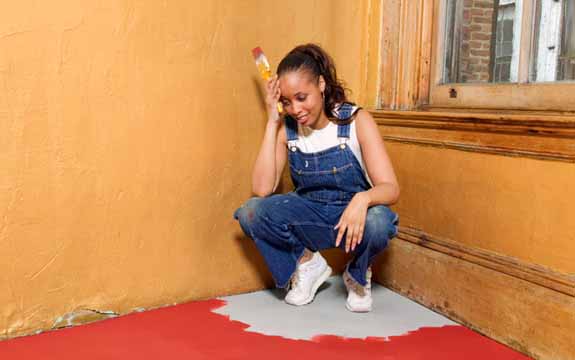 We all make mistakes. It's part of our journey in physical reality and teaches lessons. After enough mistakes are made, one will seek out the psychological reason the wrong choices were made then take that to the soul level for greater understanding about their journey here. It's all about healing and helping one's self by healing and helping others. That's the game.

In 2011 most people seek help and guidance about some greater purpose they sense they have and get frustrated by making wrong choices which are costly.

Mistakes in romantic relationships are the most common, as we learn about how we behave when we fall in love, especially when it comes to sabotage, fear, and intimacy.

If you review bad choices made in the past, or even today, you can become your own therapist and find out what motivated, or guided bad decisions. Somewhere deep inside you, something was resisting the right choice. That something is generally called self-sabotage.

When a wrong decision is made - you can curse and act out - but at the end of the day things have to be set straight and often done over.

As I write this blog August 2, 2011, we have just entered Mercury Retrograde, a time when most things seem to go wrong, especially those out of your control.

If you make a mistake, own up to it and do what you can to fix it, if it can be fixed. Not every situation has a solution. Further, what is a mistake for one person, is the correct way for another.


You need to make mistakes to get ahead   CNN - August 2, 2011
We live in a culture that sends out very mixed messages about mistakes. We're told we learn by making them, but we work mightily to avoid them; that no one's perfect, but goofing-up is bad. So the result is most of us know that we -- as parents, spouses, employers and employees -- are going to make mistakes, but deep down, we feel we shouldn't.

But since, as the old saw goes, "to err is human," how do we work toward accepting mistakes and learn from them, rather than avoiding and denying them? Well, the good news is that there are upsides to making mistakes:

One of the definitions of "to err" is "to wander or stray." Often we make mistakes because we try new things -- we stray from accepted paths. Teflon, penicillin -- these are examples of great discoveries made by mistake. Take a page from Albert Einstein, who said, "Anyone who has never made a mistake has never tried anything new."

We don't move out of our comfort zone if we're afraid of mistakes. Experiments with schoolchildren who did well on a given test show that those who were praised for being smart and then offered a more challenging or less challenging task afterward usually chose the easier one. On the other hand, children praised for trying hard -- rather than being smart -- far more often selected the more difficult task.

When we fear looking dumb, when we emphasize results over process and effort because we're afraid of messing up, then we're going to miss a lot of what's fun and stimulating in life.

Why being wrong is good for you

If we try hard to avoid mistakes, we aren't open to getting the information we need in order to do better. Experiments showed that those who are so scared to make mistakes -- ultra-perfectionists, for example -- perform worse in writing tasks than those who aren't as worried about being flawless. Experts theorize "superperfectionists" are afraid to practice writing, because to practice means to make mistakes. More importantly, they fear receiving any kind of negative feedback, so they don't learn where they went wrong and how to get better.

We don't just learn more when we're open to mistakes, we learn deeper. Research tells us that if we're only concerned about getting the right answer, we don't always learn the underlying concepts that help us truly understand whatever we're trying to figure out. Mistakes need to be seen not as a failure to learn, but as a guide to what still needs to be learned. As Thomas Edison said, "I am not discouraged, because every wrong attempt discarded is another step forward."

Mistakes can help us change deeply embedded norms. It was discovered in aviation, for example, that accidents sometimes occurred because junior pilots were afraid to correct more senior pilots when they mishandled problems; the same is true in fields such as medicine. By examining why those accidents happened, experts figured out ways to develop more flexible hierarchies, which creates better work environments overall.

Mistakes keep us humble. And that's important. When we think we're above making mistakes -- or that others are -- we stop questioning and challenging. That can lead to complacency, and really bad decisions. To quote Bill Gates: "Success makes a lousy teacher. It seduces smart people into thinking they can't lose." Overconfidence leads us to be blind to the limits of our expertise. Remember our most recent financial crisis?

When we make mistakes -- and gain insight from them -- we have more empathy for others. Research has shown that men in particular tend to become more understanding of others' screw-ups when they're asked to remember a time they messed up in a similar manner.

We learn to bounce back. This upside to mistakes should not be underestimated. Knowing how to fail, err, come back, work harder, fall down, and get up again is crucial to succeeding -- in all areas. It's called resilience and everyone, from child-development experts to employers, know that it's probably the single most important difference between those who accomplish their goals and those who don't.

Accepting mistakes is not the same as loving them. Few people are happy when they mess up, whether it's a small or large blunder. And accepting imperfection is certainly not about being lazy or careless -- quite the opposite. But we need to believe in our gut -- not just acknowledge in our mind -- that it's all right to stumble and screw up and try again. In fact, it's not just OK, it's necessary.

We're all going to make mistakes, it's just a question of choosing how we approach them. Are we going to finger-point or pretend they didn't happen? Or are we going to take responsibility, try to learn from them and forgive ourselves and others? We have the choice. The only option we don't have is perfection.