Who Lives Longer - Women or Men? 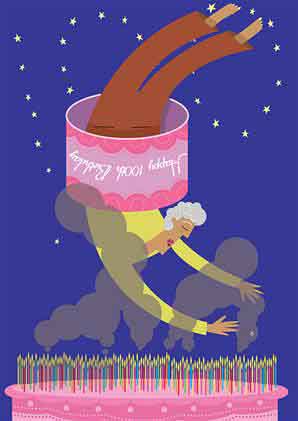 In today's world, both men and women live longer than in the past due to advancements in medicine combined with self awareness helping people stay fit and healthier. Today we deal with the emotional body first, which dictates what happens to the physical body.

Everybody has a burn-out threshold, and once they reach that point, at any age, the need for change occurs. At this point people change jobs, relationships, the way they care for themselves ... and many turn to metaphysics for answers. No one wants to grow old anymore, people going to great lengths to look and feel young.

This moves people into the patterns of healing and awareness - healing and and helping one's self then healing and helping others - first on a small scale, then a desire to affect the collective unconscious by finding something on a grand scale. People think, "I want to make a difference".

Along the way, they hope to live longer and healthier lives and hopefully do away with the diseases they change the patterns of their lives forever.

In the past it has been shown that women actually lived longer than men. Many of my senior female married clients, laugh and say that once the karma of their long-term marriage was over, they wanted to get a taste of freedom, to do what they want. They came from generations when couples didn't divorce, stucco in the same karmic patterns until one died. Now these women are free and in control ... as with each of us searching to find our identities in the games of humanity.

The moral of the story is, if you feel good emotionally, you will live longer. When the stress is gone, you first begin to live. We live in a game of emotions. The higher the frequency of the emotions that guide your life, the longer your soul will remain healthy and you will live long and prosper!


Why women live longer than men   PhysOrg - November 1, 2010
On average, women live five or six years longer than men. There are six 85-year-old women to four men of the same age, and by the age of 100 the ratio is greater than two to one. Many hypotheses have been proposed to explain the greater longevity, but there is growing evidence for the disposable soma theory, which says males are genetically more disposable than females.

A common idea is that men die younger because they have more stressful working lives than women, but if this were true the gender longevity gap should be decreasing rapidly as womenšs work comes to more closely resemble that of men. It can also be said women now have the additional stress of working outside the home on top of the stress of working inside the home, and yet there is little evidence the longevity gap is reducing by much.

Another hypothesis is that women live longer because they are less likely than men to adopt unhealthy habits such as smoking or drinking to excess, and more likely to eat well. The problem with this hypothesis is that, while women do tend to live longer than men, they are generally less healthy in their old age than men of the same age. Another problem with this idea is that the females of most other species also live longer than males.

It is a generally accepted theory that our bodies age because of a gradual accumulation of tiny faults or damage to cells or cellular components such as protein or DNA. The degenerative build-up occurs because the bodyšs regenerative processes are not quite perfect, and some of the damage remains not repaired.

Professor Thomas Kirkwood, director of the Institute for Aging and Health at Newcastle in England, first suggested in 1977 our bodies do not repair themselves as well as they could because natural selection favored the growth and reproduction phases of life over older age, in essence viewing the body as a short-term vehicle for passing on the genes to the next generation and not worth the energy investment in keeping itself going for the long term.

This may have been especially true in the hunter-gatherer period when the risk of accidental death was so great. Professor Kirkwood called this the disposable soma theory (soma being Greek for body). In an article to be published this month in Scientific American, Kirkwood extends his theory to explain the longevity gap.

Kirkwoodšs laboratory research has shown that long-lived animals have more efficient maintenance and repair systems than short-lived animals, and that long-lived animals tend to be larger, more intelligent, or have some adaptation (such as wings) that allows them to escape danger. For these animals, it seems the body is somewhat less disposable and investing energy into maintenance pays off. This leads to the idea that males have shorter lives than females in most species because they are genetically more disposable.

Laboratory studies have also shown cells in female rodents repair damage better than in males, but this difference is eliminated if the ovaries are surgically removed. It is also known that castrated male animals tend to live longer than intact animals. According to Kirkwood there is also evidence from an institution for the mentally disturbed in Kansas, where castration of male inmates was once a common practice, that castrated men lived an average of 14 years longer than uncastrated inmates.

Professor Kirkwood said it is important for the species for females to have healthy bodies, since they bear and nurture the next generation, whereas the male reproductive role is shorter-term and less related to his good health. So for females the driver for successful mating and rearing of offspring is a healthy body, leading to a tendency to live longer, while the driver for mating in males is not related to longevity. In fact, high testosterone levels (related to high fertility) tend to shorten the lifespan. Professor Kirkwood said while it's "difficult to say things with absolute assurance" he is confident his theory of males being more "disposable" than females is the underlying biological explanation for the greater longevity of females.