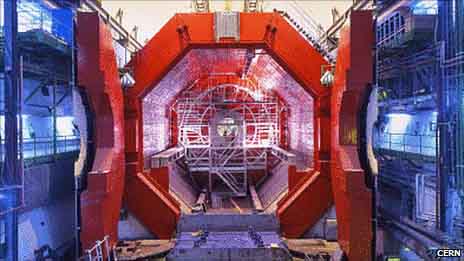 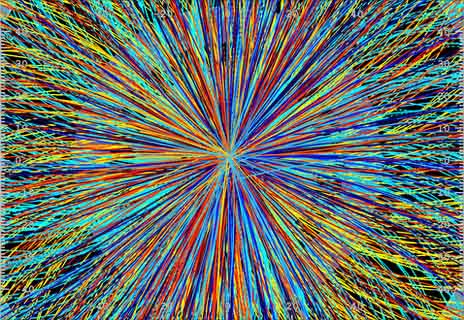 As physics and metaphysics merge, in 2008, I took an interest the Large Hadron Collider after attending a workshop in Manhattan and interviewing several of the physicists who worked on the project at CERN. What remains foremost in my mind after those 'conversations with god' (god particle researchers), is their answers to my question, "Is the universe a hologram?' Most agreed with my theories and conclusions about the holographic universe. Will we find the God Particle? How close are we? Is there something about the timing of this event that has greater implications than we are aware? This is indeed an exciting moment in history.


Large Hadron Collider (LHC) generates a 'mini-Big Bang'   BBC - November 8, 2010
The Large Hadron Collider has successfully created a "mini-Big Bang" by smashing together lead ions instead of protons. The scientists working at the enormous machine on Franco-Swiss border achieved the unique conditions on 7 November. The experiment created temperatures a million times hotter than the centre of the Sun.

The LHC is housed in a 27km-long circular tunnel under the French-Swiss border near Geneva. Up until now, the world's highest-energy particle accelerator - which is run by the European Organization for Nuclear Research (Cern) - has been colliding protons, in a bid to uncover mysteries of the Universe's formation.

Proton collisions could help spot the elusive Higgs boson particle and signs of new physical laws, such as a framework called supersymmetry. But for the next four weeks, scientists at the LHC will concentrate on analyzing the data obtained from the lead ion collisions. This way, they hope to learn more about the plasma the Universe was made of a millionth of a second after the Big Bang, 13.7 billion years ago.

One of the accelerator's experiments, ALICE, has been specifically designed to smash together lead ions, but the ATLAS and Compact Muon Solenoid (CMS) experiments have also switched to the new mode. The collisions obtained were able to generate the highest temperatures and densities ever produced in an experiment.

This process took place in a safe, controlled environment, generating incredibly hot and dense sub-atomic fireballs with temperatures of over ten trillion degrees, a million times hotter than the centre of the Sun. At these temperatures even protons and neutrons, which make up the nuclei of atoms, melt resulting in a hot dense soup of quarks and gluons known as a quark-gluon plasma."

Quarks and gluons are sub-atomic particles - some of the building blocks of matter. In the state known as quark-gluon plasma, they are freed of their attraction to one another. This plasma is believed to have existed just after the Big Bang. By studying the plasma, physicists hoped to learn more about the so-called strong force - the force that binds the nuclei of atoms together and that is responsible for 98% of their mass. After the LHC finishes colliding lead ions, it will go back to smashing together protons once again.