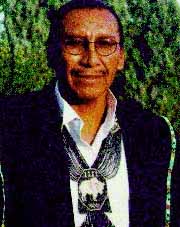 I, Chief Arvol Looking Horse, of the Lakota, Dakota, and Nakota Nation, ask you to understand an Indigenous perspective on what has happened in America, what we call "Turtle Island." My words seek to unite the global community through a message from our sacred ceremonies to unite spiritually, each in our own ways of beliefs in the Creator.

We have been warned from Ancient Prophecies of these times we live in today, but have also been given a very important message about a solution to turn these terrible times around.

To understand the depth of this message you must recognize the importance of Sacred Sites and realize the interconnectedness of what is happening today, in reflection of the continued massacres that are occurring on other lands and our own Americas.

I have been learning about these important issues since the age of 12, upon receiving the Sacred White Buffalo Calf Pipe Bundle and its teachings. Our people have striven to protect Sacred Sites from the beginning of time. These places have been violated for centuries and have brought us to the predicament that we are in at the global level.

Look around you. Our Mother Earth is very ill from these violations, and we are on the brink of destroying the possibility of a healthy and nurturing survival for generations to come, our children's children.

Our ancestors have been trying to protect our Sacred Site called the Sacred Black Hills in South Dakota, "Heart of Everything That Is," from continued violations. Our ancestors never saw a satellite view of this site, but now that those pictures are available, we see that it is in the shape of a heart and, when fast-forwarded, it looks like a heart pumping.

The Dine have been protecting Big Mountain, calling it the liver, and we are suffering and going to suffer more from the extraction of the coal from there and the poison processes used in doing so.

The Aborigines have warned of the contaminating effects of global warming on the Coral Reefs, which they see as Mother Earth's blood purifier.

The Gwich'in Nation has had to face oil drilling in the Arctic National Wildlife Refuge coastal plain, also known to the Gwich'in as "Where life begins!"

The coastal plain is the birthplace of many life forms of the Animal Nations. The death of these Animal Nations will destroy Indigenous Nations in this territory.

As these destructive developments continue all over the world, we will witness many more extinct Animal, Plant, and Human Nations, because of mankind's misuse of power and their lack of understanding of the "balance of life."

The Indigenous people warn that these destructive developments will cause havoc globally. There are many, many more Indigenous awarenesses and knowledge about Mother Earth's Sacred Sites, her Chakras, connections to our spirit that will surely affect our future generations.

There needs to be a fast move toward other forms of energy that are safe for all Nations upon Mother Earth. We need to understand the types of minds that are continuing to destroy the spirit of our whole global community. Unless we do this, the powers of destruction will overwhelm us. Our Ancestors foretold that water would someday be for sale. Back then, this was hard to believe, since the water was so plentiful, so pure, and so full of energy, nutrition, and spirit.

Today we have to buy pure water, and even then the nutritional minerals have been taken out; it's just empty liquid. Someday water will be like gold, too expensive to afford.

Not everyone will have the right to drink safe water. We fail to appreciate and honor our Sacred Sites, ripping out the minerals and gifts that lay underneath them as if Mother Earth were simply a resource, instead of the Source of Life itself.

Attacking Nations and having to utilize more resources to carry out destruction in the name of peace is not the answer! We need to understand how all these decisions affect the Global Nation; we will not be immune to its repercussions. Allowing continual contamination of our food and land is affecting the way we think.

A "disease of the mind" has set in world leaders and many members of our global community, with their belief that a solution of retaliation and destruction of peoples will bring Peace.

In our Prophecies it is told that we are now at the crossroads: Either unite spiritually as a Global Nation, or be faced with chaos, disasters, diseases, and tears from our relatives' eyes.

We are the only species that is destroying the Source of Life, meaning Mother Earth, in the name of power, mineral resources, and ownership of land, using chemicals and methods of warfare that are doing irreversible damage, as Mother Earth is becoming tired and cannot sustain any more impacts of war.

I ask you to join me on this endeavor. Our vision is for the Peoples of all continents, regardless of their beliefs in the Creator, to come together as one at their Sacred Sites to pray and meditate and commune with one another, thus promoting an energy shift to heal our Mother Earth and achieve a universal consciousness toward attaining Peace.

As each day passes, I ask all Nations to begin a global effort, and remember to give thanks for the Sacred Food that has been gifted to us by our Mother Earth, so the nutritional energy of medicine can be guided to heal our minds and spirits.

This new millennium will usher in an age of harmony or it will bring the end of life as we know it. Starvation, war, and toxic waste have been the hallmark of the Great Myth of Progress and Development that ruled the last millennium.

To us, as caretakers of the heart of Mother Earth, falls the responsibility of turning back the powers of destruction.You yourself are the one who must decide.

You alone - and only you - can make this crucial choice, to walk in honor or to dishonor your relatives. On your decision depends the fate of the entire World.

Each of us is put here in this time and this place to personally decide the future of humankind.

Did you think the Creator would create unnecessary people in a time of such terrible danger?

Know that you yourself are essential to this World. Believe that! Understand both the blessing and the burden of that. You yourself are desperately needed to save the soul of this World. Did you think you were put here for something less? In a Sacred Hoop of Life, there is no beginning and no ending!

I prophecise things that come to pass.
God is going to put a judgment on the world.
He's mad.
I'm sorry it's going to happen.
He's not going to destroy the whole world.
But every living thing will perish,
and it'll be maybe another million years
before a new life begins again.
Grandmother Earth will be alone. She's going to rest.
All because of White Man's wickedness.

Out in the West, Mount St. Helens volcano - that's a sign.
There's going to be earthquakes.
Maybe half of California and half of Washington and Oregon will go into the water.
The same in the East and in the South.
You're going to have volcanoes and earthquakes and hurricanes.