Job Related Injuries on the Increase 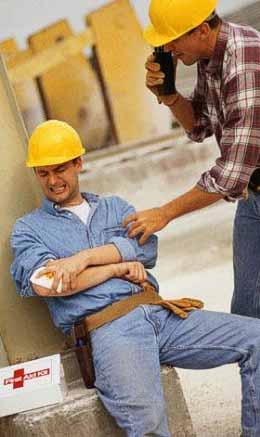 Why are job related injuries on the increase? Since the recession began in September 2008, things have gotten far worse in the workplace. People everywhere, in all occupations are burning out, which results in injuries.

As we know, the injury creates a space where people often go on some sort of disability and can stay home for a while or permanently. They use this time for many things, often highlighted with their journey into awareness. Who am I? Why am I here? They look to alternative medicine and take time to heal their issues.

This is all well and good but what is the cost to us with all these soul-searching people trying to discover the truth about themselves and reality as they awaken consciousness? It's all part of a greater plan that you will figure out in time, if you haven't already.

Are you an accident waiting to happen? Do you think about ways to stop working permanently - inheritance, 401K, insurance claim, other? How's that working for you? Always know what your afoul wants you to do and remember that stress - on and off the job - is the key to everything you create subconsciously.

The place you injury, or where you create an illness, is in relation to your emotional state. Create the parallels. If you hurt your back - life is a burden. If you hurt a leg, you don't want to move forward. Anything with the chest or breasts, relates to love of lack of it. The head goes to emotional problems long overlooked - heal your issues.

The study strongly suggests that the U.S. should place greater emphasis on reducing work-related injury and illnesses, especially since the costs have risen by more than $33 billion (inflation adjusted) since the 1992 analysis, the author said.

"It's unfortunate that occupational health doesn't get the attention it deserves," said J. Paul Leigh, professor of public health sciences at UC Davis and author of the study. "The costs are enormous and continue to grow. And the potential for health risks are high, given that most people between the ages 22 to 65 spend 40 percent of their waking hours at work."

Published in the December issue of the Milbank Quarterly: A Multidisciplinary Journal of Population Health and Health Policy, the study is based on Leigh's extensive evaluation of more than 40 datasets from sources that track work-related injuries and illnesses as well as their direct medical and indirect productivity costs.

"It's an incredible jigsaw puzzle, but an essential one to assemble, since it's impossible for business and policy leaders to effectively manage health-care resources or make changes for the better without first having an accurate assessment of costs," said Leigh.

In generating the estimate, Leigh gathered 2007 data on occupational injuries and illnesses and their costs for U.S. civilian workers, including agricultural and self-employed workers.

Injury and disease data came from the U.S. Bureau of Labor Statistics (BLS) and the Centers for Disease Control and Prevention. Available epidemiological research on the percentages of diseases -- such as chronic obstructive pulmonary disease and cancer -- that can be attributed to occupational exposures was also considered. Leigh accounted for underreported illnesses and injuries using estimates based on reporting to the BLS and workers' compensation systems.

Cost data came from the National Council on Compensation Insurance, the Healthcare Cost and Utilization Project and the National Academy of Social Insurance. Total costs were calculated by multiplying the number of cases of occupational injury or illness by the average cost per case.

The study estimated that there were:

The study also estimated 59,102 combined deaths from occupational injuries and diseases, which was higher than all deaths from motor vehicle crashes (43,945), breast cancer (40,970) or prostate cancer (29,093) in the same year.

Leigh noted in the study that workers' compensation premiums do not currently account for these high figures. In fact, less than 25 percent of the costs of workplace injuries and illnesses are covered by workers' compensation. As a result, many occupational health issues go unresolved, and the bulk of the costs are absorbed by employer-provided medical insurance, Medicare and Medicaid, raising health-care costs for everyone.

Leigh, who led the similar published study based on 1992 data, hopes his research will be used to expand awareness of the impact of occupational injuries and illnesses and to encourage prevention. He said one way to begin this process is to base workers' compensation premiums on the costs of job-related injuries and illnesses for each business or government agency rather than on industry-wide costs.

"If premiums were more experience-based, organizations would be much more motivated to invest in prevention campaigns or eliminate hazards because they would see the benefits of those changes in reduced premiums," said Leigh, who is affiliated with the UC Davis Center for Healthcare Policy and Research.

The study, which was funded by the National Institute for Occupational Safety and Health (NIOSH), also highlights how greater attention to workplace safety and health could have broad economic benefits.

"In the four decades since the Occupational Safety and Health Act and the Mine Safety and Health Act were signed, there has been significant improvement in the prevention of work-related injuries and illnesses," said NIOSH Director John Howard, M.D. "However, much work lies ahead of us, and a study such as this one is important for highlighting the economic burden of occupational illness. Gaining a better understanding of the burden helps NIOSH and our partners make the case that preventing work-related injuries and illnesses is part of a wise national strategy for economic recovery and growth. Such data also may inform innovative approaches for building or enhancing corporate safety and health cultures."