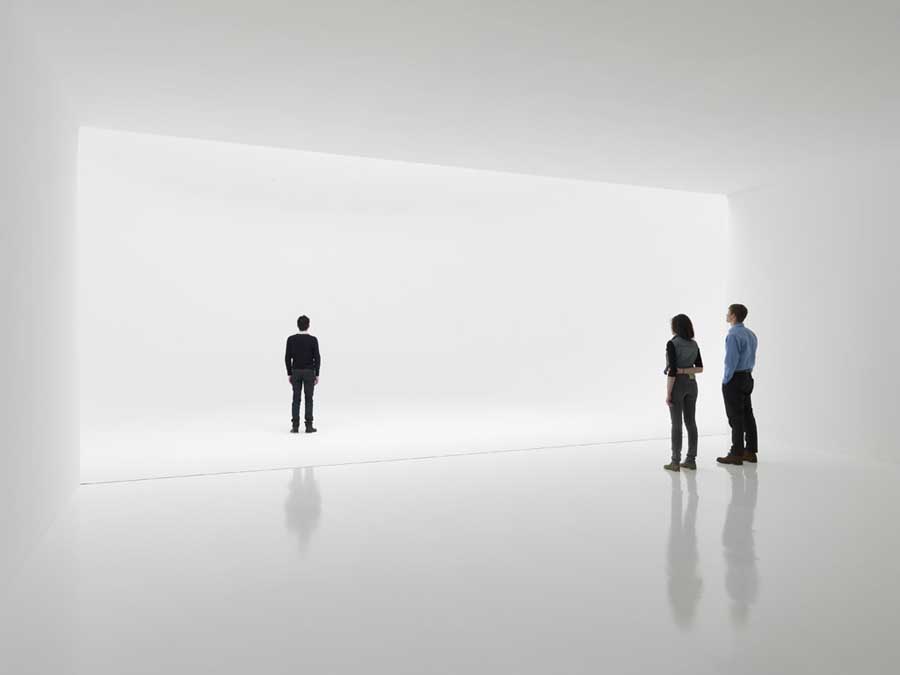 The Infinity Environment is a unique way to visualize beyond the boundaries of perception. Stepping across the threshold of Wheeler's Infinity Environment one is immediately swallowed up by luminous space. It is purely the medium of light that we explore, touch, see, and sense. His simplified use of material heightens and distills the experience. Being inside his space is at once ethereal and yet dense.

Wheeler, along with James Turrell and Robert Irwin, was one of the founders of the West Coast Light and Space movement in the 1960s and '70s, when my husband and I spent time in California. That was the era that completely broke down the physical boundary separating art from viewer making it more interactive.

Living in New York City, I have explored many art galleries through the years and have developed a large artist clientele whose work is displayed globally as well as on Crystalinks. All things evolve as does art in its endless forms. It has become theatrical, big, off the wall, out of the box, and moving us from one reality to another.

Back in the day ... light and space artists pushed this fluidness between shape and container through their investigation of the act of perception. Often they depicted voids, open space, spaces that looked empty, but were in fact filled with atmospheric light. Art was no longer a thing, but an essence with vast vistas, dramatic lighting, and utopian ideas of a flexible society.

As reality is an hologram, I am a great proponent of any type of art or graphics that allows people to think outside the box and see the truth behind the illusion - where the permeable boundary is pierced and we are encouraged to climb inside the artwork. When holograms become the norm, you'll be able to experience The Infinity Environment from the comfort of your own environment. Watch for the white light ...that day is almost here.


The 'Infinity Room': One of Many Ways to Imagine Infinity   Live Science - February 3, 2012
The Infinity Environment, an art piece by Doug Wheeler, is currently on display at the David Zwirner Gallery in New York City. It's an artist's valiant effort to realize infinity, a concept that has been known to humanity for thousands of years, but, for most of us, remains difficult to grasp. Ancient Indian philosophers understood it as the entity from which a part can be removed, or another part added, only to have it remain the same. The ancient Greeks conceived of it as the boundless set of prime numbers. Both are true descriptions, but neither evokes a visceral understanding of the true nature of the beast.