Iapetus - From the Fertile Mind of Arthur C. Clarke 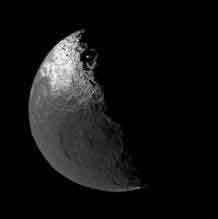 Stanley Kubrick's science-fiction epic "2001: A Space Odyssey" may seem a touch quaint in 2007, but when it came out in 1968 it was hailed as visionary. It depicted astronauts going on a mission to Jupiter, in search of the first signs of intelligent life beyond the earth.

In the book version, though, Kubrick's co-author, Arthur C. Clarke, had the astronauts going to Saturn--specifically to its moon Japetus, which, as Clarke wrote, is six times brighter on one side than the other. He imagined a large, white, eye-shaped oval on the bright side, with one of those mysterious black monoliths in the center.

Japetus is usually given the Greek-derived spelling Iapetus (pronounced "Eye-APP-ah-tuss"). A few years behind schedule, NASA's Cassini probe should come within about a thousand miles of its surface on Monday morning, U.S. time. It is only a mite less mysterious than when Clarke wrote about it. Scientists now think the more intriguing side is the dark one, which may, over the eons, have swept up debris from among Saturn's 46 other known moons. The bright side may be ice. Iapetus is a tiny world, less than 900 miles in diameter, but it may have some of the tallest mountains in the solar system--three times as high as Mt. Everest. A cold, dark, hostile place, is there a monolith on its bright side?