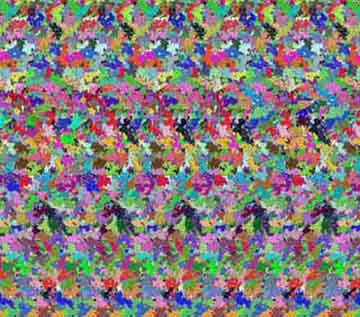 The Holographic Universe and Theoretical results about black holes suggest that the universe could be like a gigantic hologram Scientific American August 2003.

Is this picture worth a thousand words? According to the Holographic Principle, the most information you can get from this image is about 3 x 1065 bits for a normal sized computer monitor.

The Holographic Principle, yet unproven, states that there is a maximum amount of information content held by regions adjacent to any surface. Therefore, counter-intuitively, the information content inside a room depends not on the volume of the room but on the area of the bounding walls.

The principle derives from the idea that the Planck length, the length scale where quantum mechanics begins to dominate classical gravity, is one side of an area that can hold only about one bit of information.

The limit was first postulated by physicist Gerard 't Hooft in 1993. It can arise from generalizations from seemingly distant speculation that the information held by a black hole is determined not by its enclosed volume but by the surface area of its event horizon.

The term "holographic" arises from a hologram analogy where three-dimension images are created by projecting light though a flat screen. Beware, other people looking at the above image may not claim to see 3 x 1065 bits -- they might claim to see a teapot.


The holographic principle is a speculative conjecture about quantum gravity theories, proposed by Gerard 't Hooft and improved and promoted by Leonard Susskind, claiming that all of the information contained in a volume of space can be represented by a theory which lives in the boundary of that region. In other words, if you have a room, you can model all of the events within that room by creating a theory which only takes into account what happens in the walls of the room. The holographic principle also states that at most there is one degree of freedom (or 1 Boltzmann constant k unit of maximum entropy) for every four Planck areas in that theory,

Reasons for the holographic principle

Given any finite, compact region of space (e.g. a sphere), this region will contain matter and energy within it. If this energy surpasses a critical density then the region collapses into a black hole.

A black hole is known theoretically to have an entropy which is directly proportional to the surface area of its event horizon. Black holes are maximal entropy objects, so the entropy contained in a given region of space cannot be larger than the entropy of the largest black hole which can fit in that volume.

If the entropy of ordinary mass (not just black holes) is also proportional to area, then this implies that volume itself is somehow illusory: that mass occupies area, not volume, and so the universe is really a hologram which is isomorphic to the information "inscribed" on its boundaries.

Some scientists may argue that the most rigorous realization of the holographic principle is the AdS/CFT correspondence by Juan Maldacena. However, J.D. Brown and Marc Henneaux rigorously proved already in 1986, that the asymptotic symmetry of 2+1 dimensional gravity gives rise to a Virasoro algebra, whose corresponding quantum theory is a 2 dimensional conformal field theory. The AdS/CFT correspondence of Maldacena on the other hand is also known as the Maldacena-Conjecture which is due to the fact that it still lacks a mathematical proof.

Variations of the Holographic Principle

There are variations of the holographic known as the strong and weak holographic principles.

The strong holographic principle states that the information which an outside observer can derive from the surface of a black hole is directly proportional to the surface area of the event horizon. The "strong" version of the holographic principle states that an observer derives information from something through its surface which acts like a "screen" of sorts through which to view that information. However there is still a particle behind the screen projecting the information it holds onto the "screen" or surface.