One way or another we all study body language and react to hand gestures based on acquired learning. Some hand gestures are humorous, others offensive and are always linked with emotions.

Gestures are a form on nonverbal communication in which visible bodily actions are used to communicate particular messages, either in place of speech or together and in parallel with spoken words.

Gestures include movement of the hands, face, or other parts of the body. Physical non-verbal communication such as purely expressive displays, proxemics, or displays of joint attention differ from gestures, which communicate specific messages.

Gestures are culture-specific and can convey very different meanings in different social or cultural settings. Although some gestures, such as the ubiquitous act of pointing, differ little from one place to another, most gestures do not have invariable or universal meanings but connote specific meanings in particular cultures. A single emblematic gesture can have very different significance in different cultural contexts, ranging from complimentary to highly offensive, such as the finger .

Sometimes it's almost impossible to talk without using your hands. These gestures seem to be important to how we think. They provide a visual clue to our thoughts and, a new theory suggests, may even change our thoughts by grounding them in action.


When I studied astrology I was taught that people with certain Sun Signs use hand gestures more often than those with other signs. For example, Leos are said to move their hands a lot more while talking to emphasis what they are saying. 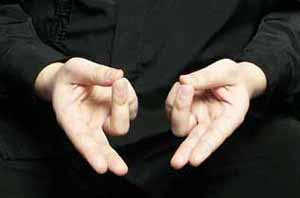 A mudra is a spiritual gesture and an energetic seal of authenticity employed in the iconography and spiritual practice of Indian religions and traditions of Dharma and Taoism. 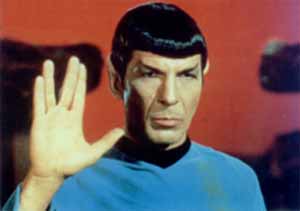 
University of Chicago psychological scientists Sian Beilock and Susan Goldin-Meadow are bringing together two lines of research: Beilock's work on how action affects thought and Goldin-Meadow's work on gesture. After a chat at a conference instigated by Ed Diener, the founding editor of Perspectives on Psychological Science, they designed a study together to look at how gesture affects thought.

For the study, published in Psychological Science, a journal of the Association for Psychological Science, Beilock and Goldin-Meadow had volunteers solve a problem known as the Tower of Hanoi. It's a game in which you have to move stacked disks from one peg to another. After they finished, the volunteers were taken into another room and asked to explain how they did it. (This is virtually impossible to explain without using your hands.)

Then the volunteers tried the task again. But there was a trick: For some people, the weight of the disks had secretly changed, such that the smallest disk, which used to be light enough to move with one hand, now needed two hands.

People who had used one hand in their gestures when talking about moving the small disk were in trouble when that disk got heavier. They took longer to complete the task than did people who used two hands in their gestures - and the more one-handed gestures they used, the longer they took.

This shows that how you gesture affects how you think; Goldin-Meadow and Beilock suggest that the volunteers had cemented how to solve the puzzle in their heads by gesturing about it (and were thrown off by the invisible change in the game).

In another version of the experiment, published in Perspectives in Psychological Science, the volunteers were not asked to explain their solution; instead, they solved the puzzle a second time before the disk weights were changed. But moving the disks didn't affect performance in the way that gesturing about the disks did.

The people who gestured did worse after the disk weights switched, but the people who moved the disks did not - they did just as well as before. "Gesture is a special case of action. You might think it would have less effect because it does not have a direct impact on the world," says Goldin-Meadow. But she and Beilock think it may actually be having a stronger effect, "because gesturing about an act requires you to represent that act."

You aren't just reaching out and handling the thing you're talking about; you have to abstract from it, indicating it by a movement of your hands.

In the article published in Perspectives in Psychological Science, the two authors review the research on action, gesture, and thought. Gestures make thought concrete, bringing movement to the activity that's going on in your mind.

This could be useful in education; Goldin-Meadow and Beilock have been working on helping children to understand abstract concepts in mathematics, physics, and chemistry by using gesture.

"When you're talking about angular momentum and torque, you're talking about concepts that have to do with action," Beilock says. "I'm really interested in whether getting kids to experience some of these actions or gesture about them might change the brain processes they use to understand these concepts." But even in math where the concepts have little to do with action, gesturing helps children learn - maybe because the gestures themselves are grounded in action.