Do the Dead Greet the Dying? 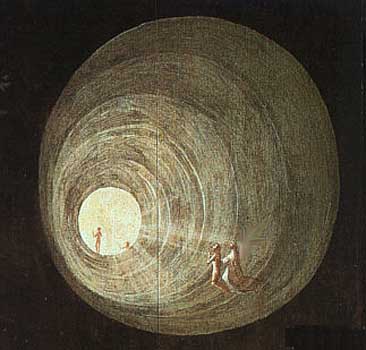 On the matter of dying..

We are souls sparks of light created from light and consciousness, here to experience emotions, record our findings, remember who we are, often by healing issues, then knowing we are ALL about to return to light as the hologram that creates this experience evolves out of existence.

When you are physical, your brain, an electrochemical machine, processes at a slow frequency, guiding your experiences here, based on your DNA codes, which in the end will remind everyone soul that the experience is ending. You are projected illusion within a physical hologram.

When you die, or leave physical reality, your projected illusion at tis frequency, ceases to exist, but your your light body, or frequency signature, continues. As psychic and Medium, it is how we identify and talk to spirits who have crossed over.

The topic of what spirits do on the other side is endless - some staying around in higher frequency, some moving to other experiences within the grid programs of reality, others returning to the collective unconsciousness.

The blog below asks the question, "Do the dead greet the dying?." The answer is Yes. If there is no one around from the deceased's soul group, the someone else can take them over.

My partner on the other side is Z or Zoroaster. When my best friend of 25 years, Louise, died of cancer on Christmas day 2000, I lay in bed watch (remote view) her fragile body slipping away in her hospital bed. I called Z and asked him to tae her consciousness (soul) out of her body. I watched as he went to her and looked at her. She smiled and look up at him. As she left this realm and went to him, a golden light emerged from her body as I watched. She came to see many times after that, to thank me.

As an experienced medium, I can tell you that someone is always there to greet a soul who is crossing over, even if it is not someone they knew while in a physical body. I have talked to thousands of spirits and those left behind here in the physical. The stories of crossing over are endless but true. Someone does you take you over.

There are so many out of body experiences we have, that understanding how it works from the physical perspective, is very difficult. Soon the answers will be understood.


Do the dead greet the dying?   Oprah.com - October 18, 2010
As the dying see less of this world, some people appear to begin looking into the world to come. It's not unusual for the dying to have visions, often of someone who has already passed on. Your loved one may tell you that his deceased father visited him last night, or your loved one might speak to his mom as if she were there in the room at that time.

It was almost 15 years ago that I was sitting at the bedside of my teacher, Elisabeth Kźbler Ross', when she turned to me and asked, "What do you think about the deceased visiting those on their deathbeds to greet them?" I replied quickly, showing my knowledge back to her: "You're speaking of deathbed visions, most likely caused by a lack of oxygen to the brain or a side effect of morphine."

She looked at me and sighed, "It will come with maturity."

I thought to myself: "Maturity? What did maturity have to do with anything?" Now, years later, I look at the events we still can't explain that happen at the end of life and realize what Elisabeth was saying.

It would be arrogant to think we can explain everything, especially when it comes to dying. My mother died when I was still a preteen. My father remained an incredible optimist his whole life, even when he was dying. I was busy trying to make sure he was comfortable and pain-free, and at first didn't notice he had become very sad.

He told me how much he was going to miss me once he was gone. And then he mentioned how much he was saying goodbye to: his loved ones, his favorite foods, the sky, the outdoors and a million other things of this world. He was overcome by sadness I could not (and would not) take away from him.

My father was very down-hearted for the next few days. But then one morning he told me my mother, his wife, had come to him the night before. "David, she was here for me," he said with an excitement I had not seen in him in years. "I was looking at all I was losing, and I'd forgotten that I was going to be with her again. I'm going to see her soon." He looked at me as he realized I would still remain here. Then he added, "We'll be there waiting for you."

Over the next two days, his demeanor changed dramatically. He had gone from a hopeless dying man with only death in front of him to a hopeful man who was going to be reunited with the love of his life. My father lived with hope and also died with it.

When I started compiling examples to include in my book, "Visions, Trips and Crowded Rooms: Who and What You See Before You Die," I was surprised by how similar they were. In fact, it was hard to pick which ones to use because they were all so much alike.

Now I realize the very thing that makes them repetitious is also what makes them unique. As someone who has spent most of my life writing, teaching and working with the dying, I can't prove to you that my father's vision was real. I can only talk about my experience as a son and about countless other occurrences that take place every day.

I used to believe the only thing we needed to alleviate was the suffering of the dying by providing good pain management and symptom control. I know now that we have more -- we have the "who" and "what" we see before we die, which is perhaps the greatest comfort to the dying.

Some interesting and unexplainable items about deathbed visions:

Visions people experience at the end of life are remarkably similar.

The dying are most often visited by their mothers. It shouldn't be too surprising that the person who is actually present as we cross the threshold of life and take our first breaths once again appears at the threshold as we take our last breaths.

Hands passionately reaching upward to some unseen force is witnessed in many deathbed encounters.

Visions mostly occur toward a corner of the room.

Those family members at a deathbed are not able to see the vision or participate in the conversation.

Visions don't seem to appear in other frightening situations where death is not likely, such as stuck in an elevator, lost in a foreign city or lost hiking.

Unlike traditional healthcare, the law treats a dying person's last words as the truth.

If you find the concept of a dead loved one greeting you on your deathbed impossible or ridiculous, consider what I finally realized as a parent: You protect your children from household dangers. You hold their hands when they cross the street on their first day of school. You take care of them when they have the flu, and you see them through as many milestones as you can.

Now fast-forward 70 years after you, yourself, have passed away. What if there really is an afterlife and you receive a message that your son or daughter will be dying soon? If you were allowed to go to your child, wouldn't you?

While death may look like a loss to the living, the last hours of a dying person may very well be filled with fullness rather than emptiness. Sometimes all we can do is embrace the unknown and unexplainable and make our loved ones feel good about their experiences.

There's really no point in telling your dying father you think he's hallucinating or that his mom has been dead for several years and can't possibly be there.

Instead of disagreeing, try asking him, "What is your mom saying?"

Say, "Tell me more about your vision." Perhaps Aunt Betty is telling your father that it's okay to die or maybe they're reminiscing about growing up together.

Say, "It's great that Aunt Betty is here with you," or "I knew that Mother would come to meet you," or "I'm so glad that Mom is with you now."

Denying their reality will only separate you from your loved one. So join and explore this profound time of life.

The saying goes, "We come into this world alone, and we leave alone." We've been brought up to believe that dying is a lonely, solitary event. But what if everything we know isn't true? What if the long road that you thought you'll eventually have to walk alone has unseen companions?

I would welcome those of you who have had an experience of your dying loved ones being comforted by those already deceased to share these stories here with others. In sharing our stories, we will see that the journey at the end of life is not a lonely path into eternity.