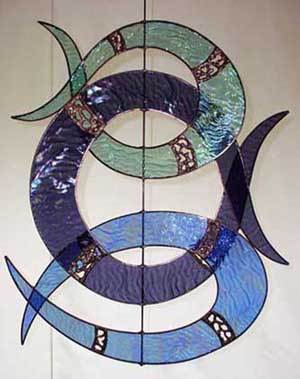 My boyfriend and I refer to our unique brand of spirituality as "Country Fried Consciousness". We live in the Deep...deep...South, bleed grits and gravy and drive the prerequisite pickup truck. Yet, we can "chew the fat" with you on subjects ranging from Edgar Cayce to Shamanism, Gregg Braden to Madame Blavatsky, the String Theory to Quantum Mechanics and, of course, Ellie at Crystalinks.

A plumber by trade, he looks like Sean Connery, sounds like Sam Elliott and never misses the opportunity to help unclog people's lives as well as their toilets. He gets a kick out of the symbolic correlation between the acts. I love him like I didn't know it possible to love another human being. And he, me. But couples have their problems.

Sometimes it just doesn't matter that he answers your thoughts with his own....that you can have a complete dialogue without the physical utterance of a single word. It doesn't matter that you laugh yourselves sick because you're the two biggest dorks you know, or that you would lay down your life for the other's. Nope. Sometimes, one of you has to make the decision to cut the cords because it's the right thing to do...for both of you. Yeah...decision making skills like that are what lead the Universe to teach me a lesson I will never, ever forget.

After a particularly rough week, I told my boyfriend it was over. Since neither of us are the break up/make up type, and since neither of us make serious decisions without giving the matter a great deal of forethought, it was an emotionally charged episode...incredibly so. Ultimately, we decided to take a step back and do what all mature, rational, Southerner's do in emergent situations.

Up at 5AM - on the pier by 7AM - lines in the water by 7:01AM. All standard operating procedure until our rods jerked at the very same time. A clear indication we, both, had a bite. As we reeled in our respective fish, a brief acknowledgement of the other's catch passed between yet we didn't notice the fish were caught simultaneously, both were Sea Trout and exactly the same size. Lines back in the water, it wasn't too long before our poles tugged again.

At the same moment.

This time we reeled in two medium sized rays. Each a mirror image of the other. Because Southerner's DNA are coded with the Busy-Body gene and because the law requires that you speak to everyone who ever comes within earshot, the couple next to us introduced themselves with; "Wow. That's freaky. Does that happen to ya'll a lot"? Now, fishing is a highly specialized form of meditation and we'd spent the morning in silence, each wrapped in our own contemplative cocoon. So, when the question came to us, we had no idea what they were asking.

"Ya'll caught two rounds of the same kind of fish at the same time. We ain't never seen that before". But our consciousness was muddied because we'd been so focused on our problems what they were really saying didn't get through. Not only did we completely ignore the synchronicity of the events but even the blatant message - almost command - from Spirit. I mean, honestly, was it possible for the Universe to be more flagrantly literal than to prompt the couple next to us to point out the obvious?

Maybe we should lay off the BBQ. We smiled politely at the couple, cast again and went back to our Zen. I don't know what he was thinking, but at that point my ego had stepped aside, my spirit had calmed down enough to surrender to the Universe and I called on my guides - and any Angel who might be hanging around - to send me a sign. We love each other and don't want to be separate. What do we do?

Our poles tugged so hard they almost went over the railing! In perfect unison, we lunged, snatched them up and began the battle royal! Because of the fight this thing was putting up and because both our reels were involved we assumed our lines had gotten tangled so we had to work together to bring in the catch. Within a minute or two we were surrounded by thirty or more people who wanted to see the show. That's also a law in the South. If you're fishing and someone near you has what might be "the big one", you are required to stop everything you're doing and stare, thereby sending supportive energy to your fellow fishermen. We finally reeled up the biggest Catfish either of us had ever seen.

Number one, of all the kinds of fish it could have been, it was a Catfish. We have nine rescue cats at home and volunteer at a big cat sanctuary. Cats are a big deal to us. But that's not even the strange - beautiful...but very strange - part. Our lines weren't tangled at all. Somehow, our lines ended up so close to one another in the briny deep that - somehow - the Catfish bit on both hooks!

The event caused quite a commotion. Even the old timers had to comment it was "the darnedest thing they ever saw". This time, we didn't miss the message. My boyfriend and I exchanged a quiet but profound "I love you", packed up our gear and went home...together.

If you're in the middle of a quandary, ask for help. Just remember though, if you don't pay attention to the synchronicity, the messages will keep getting more overt until, eventually, Spirit will reach out and slap you upside the head. Think of your needs as bait, cast your line into the deep blue Universe and go fish...