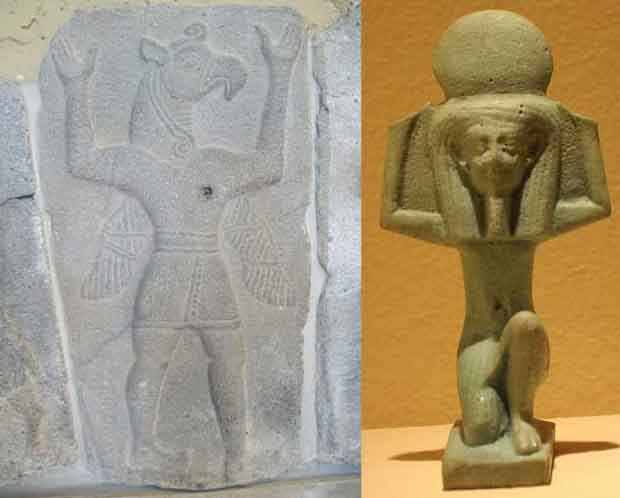 The myth of a giant supporting the sky appears in many cultures around the world. It is extensively connected with the theme of the polar column. Two possible naturalistic explanations involve enhanced plasma activity in the vicinity of the ancient Earth.

Familiar though the Greek myth of Atlas may be, one looks in vain for an obvious prototype in the natural world. In itself it appears reasonable enough that some natural phenomenon inspired the image of a sky-scraping giant holding up the firmament on his arms, but it seems hardly possible that mountain chains such as the Atlas mountains on the Moroccan coast have inspired the theme.

The mystery is compounded by the profusion of similar sky-bearing characters in other mythologies. The one shown on the left, above, is an anonymous Anatolian example from Zincirli, on display in the Pergamon Museum in Berlin; on the right one sees the Egyptian god Shu, whom the Pyramid Texts, followed by the Coffin Texts, praise as the one "whose arms which are under the sky are upraised."

Further afield, one encounters the Chinese giant Pan Gu, the Vedic first man Purusha or Indra, the Polynesian Tane and Maui, and the Aztec culture hero Quetzalcoatl, all of whom are portrayed as anthropomorphic gods of tall stature that hold the sky aloft. The recurrence of the theme cries out for an explanation other than an obsolete Freudian phallus symbol or an exaggerated impression of some local landscape feature.

The key to the mystery is that the cosmic giant is a symbolic variation on the theme of the world axis. Deities like Atlas and his congeners fluctuated between humanoid and mountainous shapes, were repeatedly associated with some "navel" or "centre" of the world, featured in the cosmogonic story of the separation of heaven and earth, and were often endowed with a luminous quality, appearing as a lofty, blazing column identified as the first light in the created world. The convergence of such motifs, which can be demonstrated in excessive detail, forcefully suggests that the heaven-carrying man requires the same explanation as the symbolism of the world axis in general, including universal trees, sky-reaching mountains, and ropes linking the extremities of the cosmos.

The plasma model offers an elegant explanation for the bewildering variety of such myths: an exceptionally intense, sustained auroral pillar observed during a prolonged geomagnetic storm - such as modeled now for the Neolithic-Bronze Age boundary - could account for a large number of features ascribed to "axis symbols". Alternatively, at some point in time an enhanced zodiacal light such as produced in the aftermath of cometary disintegration could equally have informed the theme of a humongous man standing at the boundary of the earth.

Atlas was the son of Iapetus and the nymph Clymene, and brother of Prometheus. He was the father of the Hesperides, Maera, the Hyades, Calypso and the Pleiades. Atlas led the Titans in a war against the gods of Mount Olympus. When the Titans were defeated, Zeus punished him with the burden of carrying the heavens upon his shoulders. Atlas was turned to stone by Perseus using Medusa's head in the place where the Atlas mountains now stand, after he threatened Perseus when wanting to speak to his father Zeus about the punishment that had fallen upon him. He is also known as one of the founding kings of Atlantis.

Atlas was tricked by the hero Heracles, one of whose Twelve Labors involved the retrieval of some of the golden apples of the Hesperides; Heracles offered to hold the heavens for a little while in exchange for the apples, and Atlas agreed. Upon his return with the apples, however, Atlas refused to take the heavens back from Heracles. Heracles then tricked the giant again by agreeing to take his place if he would only take the sky again for a few minutes so Heracles could rearrange his cloak as padding on his shoulders. When Atlas took the heavens upon his shoulders again, Heracles left

The etymology of the name Atlas is uncertain and still debated: some derive it from the Proto-Indo-European root 'tel', 'to uphold, support'; others suggest that it is a pre-Indo-European name. Since the Atlas mountains fall in the region inhabited by Berbers, it could be that the latin name as we know it is taken from Berber.

In fact, the sun is often called the 'eye of the sky'.

And since it sets to the west, the Atlantic ocean can be called "the place of concealment of the sun" or Antal n Tit. Greeks could have borrowed this name for the ocean and called it Atlantic, and later used its root ATL to form the name Atlas."Atlas" is also the presently used name of many objects and places (see Atlas (disambiguation)).

Since the middle of the sixteenth century, he is often shown in cartographic atlases. However it was not he but rather the mythical King Atlas that was depicted by Mercator in the first book to bear the name "atlas" and who gave his name to that type of book.

Atlas continues to be a commonly used icon in western culture (and advertising), as a symbol of strength or stoic endurance such as the superhero, Captain Marvel who was granted the stamina of Atlas as part of his powers. In such contemporary depictions, he is often shown kneeling over on one knee while supporting an enormous round globe on his back and shoulders. (The depiction of Atlas holding a large round disk on his back is more accurate, however, since the Greeks believed that the world was flat.)

The image of Atlas bearing a great burden was used by the author Ayn Rand in her novel Atlas Shrugged, which serves as an important metaphor throughout the novel. A character in the novel says that Atlas is "the giant who holds the world on his shoulders", although Atlas actually held the heavens and not the Earth.