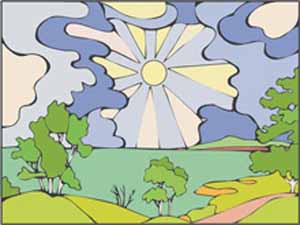 A Crystalinks reader recently visited a place called Foco Tonal in Mexico, to experience healing and energy. Not finding information about it on Crystalinks, she suggested I check it out. Wiki didn't have anything, but Google lead me here ...

Around the Lake and Back

Places known for spiritual power and healing energy exist in various parts of the world, but few people know there is a special place at Poncitlan, near Ocotlan, that draws hundreds of people in search of help and healing.

Foco Tonal (light and color) was identified as a power place by a clairvoyant from Reynosa, Tamaulipas. As Manuel Dominguez, owner of the land where Foco Tonal is located, tells the story, Don Jose Sebastian Zamora was a visionary and healer who had visited three times, in astral travel (the consciousness traveling without the body) a special place of healing and light, but he didnŐt know where it was located in the physical world.

In 1994, Don Javier Salcedo Arevalo, a man who credited Don Jose with saving his legs from amputation, invited him to visit Ocotlan. Dominguez wanted to meet Don Jose and invited him to the fanciful castle home, complete with turrets and dragon gargoyles, that he was building next to Lake Chapala. As Don Jose walked around the house and wandered the grounds, he recognized the spot as the power place he had visited spiritually. He located an area that held two vortexes of energy that drew energy upward and one that brought energy down from the heavens and marked the location with a stick.

Having identified the energy center, the men began the construction of a sort of temple without walls. Dominguez said the open air, roofless structure, shaped something like a shallow, circular swimming pool with seven pillars of different colors rising from the rim, was about 60 percent complete when the emergence of an amazing echo proved to him that it was a sacred place. The echo can still be heard when visitors speak their true names at a mark inside the circle.

Don Jose returned to check out the echo. During a month of prayer, he was told that Saint Germain, an ascended master (a spirit that has been incarnated on earth, mastered EarthŐs lessons, and now helps from the other side) had asked to be the protector of Foco Tonal. Dominguez said Don Jose had given Foco Tonal its name, then said, "This was my mission. It is finished." About five months after giving Dominguez complete charge of Foco Tonal, Don Jose died quietly in his bed. Now Dominguez calls the place 'a heritage for the world,' and claims many healings take place there, as Don Jose foresaw.

There is a connection to the Pitch Center which took me to Tonic Music.

The tonic is the first note of a musical scale, and in the tonal method of musical composition it is extremely important. The triad formed on the tonic note, the tonic chord, is thus the most important chord. More generally, the tonic is the pitch upon which all other pitches of a piece are hierarchically centered.

In western European tonal music of the 18th and 19th centuries, the tonic center was the most important of all the different tone centers which a composer used in a piece of music, with most pieces beginning and ending on the tonic, usually travelling to the dominant (the fifth above the tonic, or the fourth note up from the tonic) in between.

There can be major scales and minor scales. The tonic remains the same in these two different "modes," for a given key, whereas scale degrees such as the third degree and the sixth degree are altered in the minor scale.

This can be seen another way. Each minor scale uses exactly the same set of notes (key signature) as some major scale and vice-versa. The only difference is which of these notes functions as the tonal centre - which of them is the tonic. For example, C major and A minor have no sharps or flats. Consequently, the tonic plays an important part in determining why music composed using a minor mode sounds different from music composed using a major mode.

A tonic may be considered a tonal center, while a pitch center functions referentially or contextually in an atonal context, often acting as axis or line of symmetry in an interval cycle (Samson 1977). Pitch centricity was coined by Arthur Berger in his "Problems of Pitch Organization in Stravinsky".

The tonic diatonic function includes four separate activities or roles as the principal goal tone, initiating event, generator of other tones, and the stable center neutralizing the tension between dominant and subdominant. The tonic of a scale can sometimes be determined by those with perfect pitch.

Photos of the Area

Tonal is a concept within the study of Mesoamerican religion, myth, folklore and anthropology. It refers to the belief found in many indigenous Mesoamerican cultures that a person upon being born requires a close spiritual link to an animal, a link that lasts throughout the lives of both creatures. It is in this way similar to the concept of Totem.

I am originally from Mexico City, living in Vancouver, BC since 1999. One of my best friends, Rosy Gomez, knows Manuel, the owner of the land in Jalisco where the FOCO TONAL takes place. She can explain it better to you. Also, Alan Loranka a respected Astrologer and Spiritual teacher from Mexico organizes spiritual tours to work with the energy at the FOCO TONAL.

I'm quite sure "foco tonal" is a combination of Spanish and Nahautl (Aztec). Foco means focus or center, and tonalli means something like soul, spirit, fate, personal energy. The Nahuatl people believed that a person had three essences. The first, the tonalli, was located at the top of the head. A person's tonalli governs their fate in life, what they are destined to do and what actions are most auspicious for a person to take.