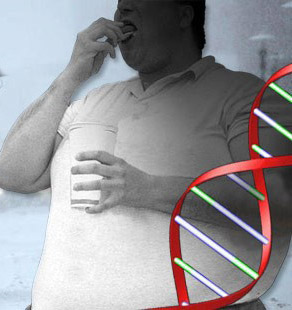 'Obese but happy gene' challenges the common perception of link between depression and obesity   PhysOrg - November 20, 2012
McMaster scientists have uncovered evidence that the gene FTO - the major genetic contributor to obesity - is associated with an eight per cent reduction in the risk of depression.

In other words, it's not just an obesity gene but a "happy gene" as well.

The research appears in a study published today in the journal Molecular Psychiatry. The paper was produced by senior author David Meyre, associate professor in clinical epidemiology and biostatistics at the Michael G. DeGroote School of Medicine and a Canada Research Chair in genetic epidemiology; first author Dr. Zena Samaan, assistant professor, Department of Psychiatry and Behavioural Neurosciences, and members of the Population Health Research Institute of McMaster University and Hamilton Health Sciences.

"The difference of eight per cent is modest and it won't make a big difference in the day-to-day care of patients," Meyre said. "But, we have discovered a novel molecular basis for depression."

In the past, family studies on twins, and brothers and sisters, have shown a 40 per cent genetic component in depression. However, scientific studies attempting to associate genes with depression have been "surprisingly unsuccessful" and produced no convincing evidence so far, Samaan said.

The McMaster discovery challenges the common perception of a reciprocal link between depression and obesity: That obese people become depressed because of their appearance and social and economic discrimination; depressed individuals may lead less active lifestyles and change eating habits to cope with depression that causes them to become obese.

"We set out to follow a different path, starting from the hypothesis that both depression and obesity deal with brain activity. We hypothesized that obesity genes may be linked to depression," Meyre said. The McMaster researchers investigated the genetic and psychiatric status of patients enrolled in the EpiDREAM study led by the Population Health Research Institute, which analyzed 17,200 DNA samples from participants in 21 countries.

In these patients, they found the previously identified obesity predisposing genetic variant in FTO was associated with an eight per cent reduction in the risk of depression. They confirmed this finding by analyzing the genetic status of patients in three additional large international studies.

Meyre said the fact the obesity gene's same protective trend on depression was found in four different studies supports their conclusion. It is the "first evidence" that an FTO obesity gene is associated with protection against major depression, independent of its effect on body mass index, he said. This is an important discovery as depression is a common disease that affects up to one in five Canadians, said Samaan.