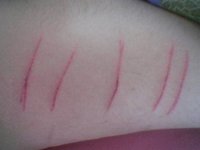 I read a woman whose 14 daughter was caught cutting herself, which goes to self-multilation. At first my client and her husband went through denial that anything was wrong. But after seeing the scars, they found a qualified psychiatrist who deals with teenagers who self-abuse, getting the family the needed help to recover.

By synchronicity, today on the Oprah Show, the topic was 'cutting', featuring a teenage girl who cuts herself. The discussion centered on finding help for the girl, first through realizing and accepting that the girl had emotional problems, then with an intervention, followed by lots of time with a psychiatrist and medication. It was so sad to watch film clips of the agony this girl went through, how she could not stop cutting herself, and what she was thinking at the time she did. Cutting of course going to one or more personality disorders and often abuse at home.

It was mentioned that at least 50% of those who 'cut themselves' were sexually molested in childhood. Sexual abuse creates scars that are the most difficult to overcome and last a lifetime, surfacing from time to time in one form or another, usually with addictive patterns. Oprah mentioned that 1 out of 4 woman has been sexually abused in childhood, though she believes the actual statistics are higher.

Many people who are mentally ill cut-off their hair for no reason, often leaving it lopsided, a reflection of their inner turmoil.

Conscious awareness, books, interventions, media, workshops, healing groups, and so on, are helping people face challenges and hopefully overcome them.

If you know someone with this problem, tell him or her it is time to seek professional help even if your deepest secrets will be revealed. 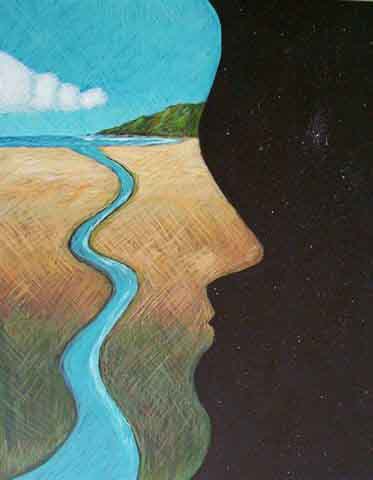 Never forget that the whole journey is 'in your mind'.

There are many ways we inflict physical and emotional pain on ourselves, often starting in childhood by more seriously manifesting at puberty and on.

This injury may be aimed at relieving otherwise unbearable emotions, sensations of unreality and numbness, or for other reasons. Self-harm is generally a social taboo. It is sometimes associated with mental illnesses such as Borderline Personality Disorder, with a history of trauma and abuse; and with mental traits such as perfectionism.

A more rare form of self-injury involves swallowing dangerous objects or substances. The usual purpose of self-injury is not to attempt suicide, but to relieve unbearable emotional pressure.

However, self-injury is a strong predictor for future suicide or suicide attempts. A self-injurer is significantly more likely than people of other diagnoses to attempt or complete suicide in the year after an incident of self-injury.

Self-injury is seen by some as attention seeking behavior, though many self-injurers are ashamed and embarrassed, going to some lengths to conceal their behavior from others.

Strictly, self-harm is a general term for self-damaging activities (which could include alcohol abuse, bulimia, etc).

Self-injury refers to the more specific practice of cutting, bruising, self poisoning, over-dosing (without suicidal intent, at first), burning or otherwise directly injuring the body.

Self-harm is also a way for people to relieve the emotional pain of everyday life, especially in the case of teenagers. They may cut themselves with scissors or use whatever means available to "wipe out" the emotional distress that they may be feeling inside.