The Cube of Zoroaster 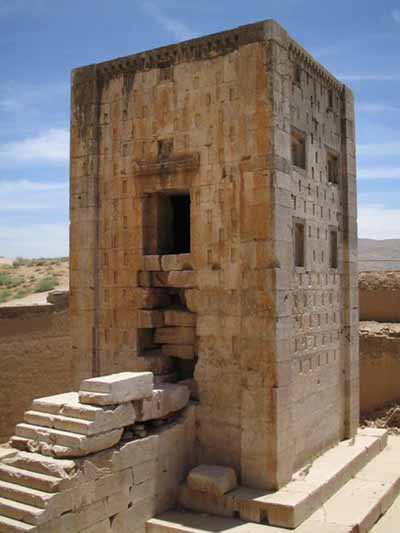 The Ka'ba-i Zartosht meaning the "Cube of Zoroaster", is a 5th century BCE Achaemenid-era edifice at Naqsh-e Rustam, an archaeological site just northwest of Persepolis, Iran. The name Ka'ba-ye Zartosht probably dates to the 14th century, when many pre-Islamic sites were identified with figures and events of the Qur'an or the Shahname. The structure is not actually a Zoroastrian shrine, nor are there reports of it ever having been a pilgrimage site.

The structure, which is a copy of a sister building at Pasargadae, was built either by Darius I (r. 521-486 BCE) when he moved to Persepolis, or by Artaxerxes II (r. 404-358 BCE) or Artaxerxes III (r. 358-338 BCE). From a reference to fire altars in a Sassanid-era inscription on the building it has been inferred that the structure was once a fire altar, or perhaps as an eternal-flame memorial to the emperors whose tombs are located a few meters away. This is however highly unlikely since the lack of cross-ventilation would have soon choked the flame.

Today, most scholars consider the structure to be an Achaemenid royal tomb, and it has been observed by F. Weissbach and A. Demandt that both the Ka'ba-ye Zartosht and its sister building at Pasargadae "more closely correspond to the description of Cyrus the Great's tomb by Arrian (6.29) and Strabo (15.3.7) than does the monument in Pasargadae which is commonly attributed to this king."

Experts say that Zoroaster's Kaba at the Achaemenid site of Naqsh-e Rustam in Fars Province will collapse in less than ten years if the railroad currently under construction near the monuments becomes operational, MNA reported. The powerful jolts caused by trains will devastate the unique Achaemenid monument an expert of the Parseh and Pasargadae Research Foundation, told the Persian service of CHN. A five-meter high embankment spoiling the landscape of Naqsh-e Rustam has been made for the railway track about 350 meters from the monument. In addition, the rumbling of the trains will damage the monument in the future. The embankments for the railway track have been completed from Shiraz to Hajiabad village and from Isfahan to Marvdasht, although the Cultural Heritage and Tourism Organization never approved any map for the construction of the railroad. In addition, experts believe that the construction of the railroad near the monuments of Naqsh-e Rustam in Fars Province will cause Persepolis to be added to the UNESCO List of World Heritage in Danger.

What was the Zoroaster's Kaba? There are various theories as to its original purpose. Some experts believe that the monument was the home of a complete copy of the Avesta which had been written on 12,000 leather parchments. Some Orientalists also believe that Zoroaster's Kaba was a place where the Zoroastrians' sacred fire was kept burning eternally. A number of other researchers say that the monument is the tomb of Smerdis, the son of Cyrus the Great, who was murdered by his brother Cambyses (king of Persia 529-522 BC). Some archaeologists also believe that it was used as an ancient government archive.

In 2005, Iranian archaeologist Reza Moradi Ghiasabadi rejected this theory and described the monument as the world's most unique calendrical and astronomical observatory. "At the end of Shahrivar (the sixth month of the Iranian calendar, August 23-September 22) we can determine exactly the day of the month by the light shed by the sun on Zoroaster's Kaba. It has been used for daily needs, determining the time of cultivating crops, and collecting taxes," he explained. Zoroaster's Kaba bears a Sassanid era inscription explaining the historical events during the reign of the Sassanid king Shapur I (241-272 CE). The trilingual inscription, written in the Sassanid and Parthian dialects of Middle Persian and ancient Greek, describes the war between Persia and Rome in which Shapur I defeated Valerian, who was captured in 260 and died in captivity.