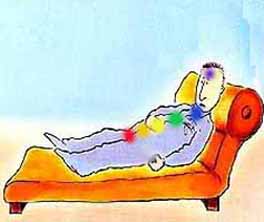 The couch potato is linked with the root chakra, base emotions, feeling safe, putting down roots and have a fear of uprooting from the home, survival.

Couch potatoes lack balance in the second chakra, creativity, combined with the third chakra, the ability to manifest outside the home.

They are generally not communicative, fifth chakra, and ask to be left alone.

... Just another look at the polarity of the physical experience ... mobility vs. immobility ... on all levels.

The program is collapsing ... imploding ... as the gears of time and illusion slow down.

Our souls are about to experience an extreme make-over.

Many people are tired, burned out, suffering from depression and other emotional problems.