The Psychology of Commuting 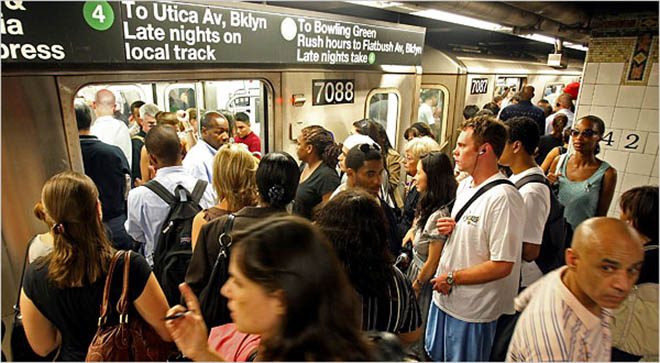 The one thing I love about driving - even with it all its pitfalls - is that being alone in a car has a freedom about it. You can listen to music, process your life, control the temperature around you, talk to someone, among other things that allow people to use their vehicle in different ways. In a vehicle you are commuting alone yet subject to everything around you especially other drivers ... and so you develop a strategy that works for you.

At some point most of us commute using public transportation. Train, bus, plane, whatever gets you there .... and you discover there is a whole psychology behind the commuting process. But isn't that true about everything we encounter as we start off each day with its own set of issues and dramas? In metaphysics the word "vehicle" refers to one's life path - their journey in physical reality - and what they encounter along the way.

Most commuters know the behavior patterns of others and what they should do and not do. Can you talk on a cell phone? Can you use an iPad? Should you start a conversation with a stranger? How closely should you guard personal belongings? Most of all when it comes to the people we meet when commuting - how should we behave? Sometimes there's a friendly smile meaning Hello, or something more intimate such as flirting, but other times one feels unsettled and tends to be more guarded avoiding direct eye contact and the subtle use of body language to get your message across.

Here are some helpful tips about the psychology of commuting.


How to Use Psychological Tactics to Avoid Strangers on a Bus   Wired - August 1, 2012 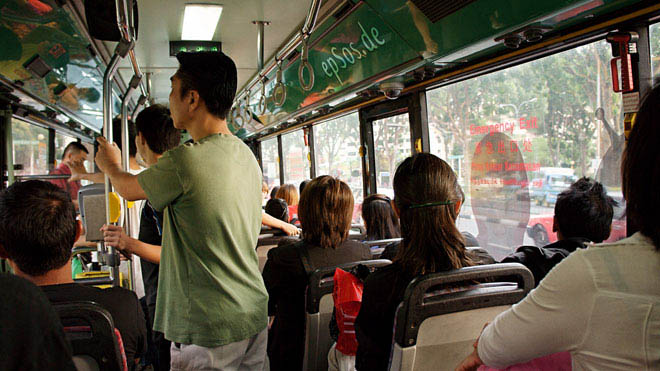 A sociologist who rode coach buses for three years has codified the unspoken rules of avoiding total strangers.

We live in a world of strangers, where life in public spaces feels increasingly anonymous, said sociologist Esther Kim of Yale University in a press release. However, avoiding other people actually requires quite a lot of effort and this is especially true in confined spaces like public transport.

Buses provide a relatively inexpensive way of traveling long-distance, but the trips can take days. Sitting next to an unpleasant person can turn a long ride into an extended nightmare. Most riders try to keep the seat beside them open, maintaining a small but important space to stretch legs, curl up and generally be alone. Of course, courtesy dictates that riders share their seats when asked, turning periods of passenger embarkation into silent struggles.

To document the psychological battleground, Kim embedded herself in it, logging thousands of miles on long-distance buses. In addition to documenting passenger behavior, she interviewed many of them to understand their strategies. We engage in all sorts of behavior to avoid others, pretending to be busy, checking phones, rummaging through bags, looking past people or falling asleep, she said in the release. Sometimes we even don a Ôdon't bother me face' or what's known as the Ôhate stare.'

Kim systematized the unspoken rules into a list of strategies commonly used to keep a free seat:

Lean against the window and stretch out your legs.

Sit on the aisle seat and listen to music to pretend not to hear people asking for the window seat.

Place a large bag or multiple items in the empty seat to make it time-consuming to move.

Look out the window with a blank stare to appear crazy.

Pretend to be asleep.

Put your coat on the seat to make it appear already taken.

If all else fails, lie: Say the seat has been taken by someone else.

The game changed, however, when drivers announced a bus would be full. Riders just wanted to avoid the crazy person and sit next to a normal person. Kim found that race, class and gender weren't key concerns when commuters realized someone had to sit next them. They were primarily concerned with maintaining their own safety. Ultimately this nonsocial behavior is due to the many frustrations of sharing a small public space together for a lengthy amount of time, Kim said in the release. Yet this deliberate disengagement is a calculated social action, which is part of a wider culture of social isolation in public spaces.


Study Reveals How Commuters Avoid Each Other   Live Science - August 1, 2012 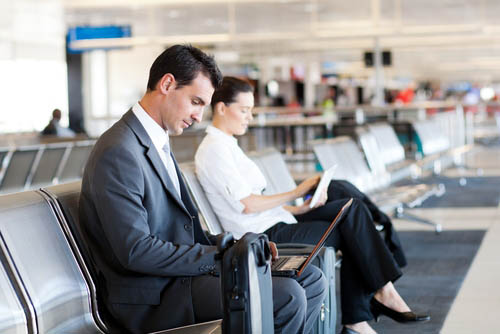 When there's an open seat next to you on a bus or train, do you cover it with your coat? Or spread out and avoid eye contact with passengers looking for a seat? Commuters often go to great lengths to close themselves off to strangers while traveling and now a Yale researcher has documented some of these antisocial tactics.

"We engage in all sorts of behavior to avoid others -pretending to be busy, checking phones, rummaging through bags, looking past people or falling asleep," Esther Kim, a grad student studying sociology at Yale, said in a statement. "Sometimes we even don a 'don't bother me' face or what's known as the 'hate stare.'"

By watching and talking to passengers over dozens of hours of coach bus trips across the U.S., Kim recorded the most common antisocial behaviors and unspoken rules of commuting and published them in the academic journal Symbolic Interaction. The most sacred rule, she found, was that sitting down next to someone when there are rows of open seats makes you look like a "weirdo."

Kim also collected advice from passengers on how to repel strangers who might want to sit next to you. Their tactics included avoiding eye contact, stretching out their legs or using a bag or coat to cover the empty seat, and even sitting in the aisle seat and looking out the window with a blank stare.

But these rules change when passengers know the bus will be full and they will have to sit next to someone, Kim found. "The objective changes, from sitting alone to sitting next to a 'normal' person," she explained in a statement. The "normal" factor usually trumps race, class, gender and other background characteristics when it comes to choosing a bus buddy. She also observed that passengers prioritize their own comfort level. "One rider told me the objective is just 'getting through the ride,' and that I should avoid fat people who may sweat more and so may be more likely to smell."

Kim concluded that these antisocial behaviors likely arise from the frustrations of sharing a small public space for a long time. "Yet this deliberate disengagement is a calculated social action, which is part of a wider culture of social isolation in public spaces."