When Cultures Collide... It's All Alien To Me 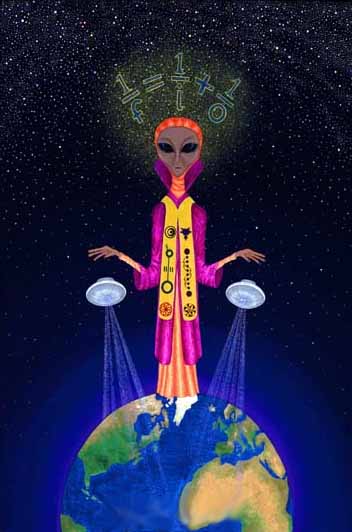 Back in the late 1980's I went from full time teacher to a substitute teacher, thereby freeing my time to work as a counselor, psychic and continue my metaphysical quest. It is at moments like these that you trust you will attract the money needed. As a substitute teacher I taught children of all ages from kindergarten through High School.

I particularly enjoyed doing creative things with the youngest children, as they seem to come up with the most interesting perceptions of reality. Children generally tell it like it is.

I remember the last time I taught elementary school... It was a third grade class, about 20 children, age 8-9, getting ready for spring break. As with most public schools in the NYC system, there are children of many different ethnic backgrounds in one class.

I lived in an area of Brooklyn called Manhattan Beach, which is just off the Atlantic Ocean. Brighton Beach was always a melting pot especially at this time. Many immigrants were moving to Brighton from Russia and the Ukraine, to the adjacent neighborhood, travel west, called Brighton Beach, which as you may know from watching movies, has become predominately Russian. The main elementary school in Brighton Beach is PS 253, oddly the school I had attended when I returned from by journey to Nevada with my mother in 1954, where I saw the UFO and met Z!

.....The year was 1989 and I was into UFO research. I had decided to return to the Nevada, when school was out, so I could retrace the journey I had as a child, and perhaps meet Z again! But that's another story...or many stories.

I was working as a hypnotherapist, regressing people who believed they had been abducted by aliens. The synchronicities in my life were ongoing were daily as I got to know Budd Hopkins, Whitely Strieber, Bill Knell, Zecharia Sitchen, the list endless.

Everyday is exciting when you set out to find your quest, and mission in life. Your soul just keeps on bringing experiences and information, as if it had been in waiting for you to start your spiritual journey forever. It is exciting and addicting at the same time. Sometimes you want to integrate your spiritual adventures into your mainstream existence just to see what will happen.

While teaching my third grade class, Z told me to do the following exercise with the children. It was to be a journey for them into what I called a past life adventure, but they would not realize where I was going with this experience. Z would guide the children, but they would not know that is was a past life. I was merely to give them paper and crayons, and tell them to draw a picture about something they dreamed about. Then they were to talk to the class about their picture and dream.

The children happily and diligently set out to draw their images. You could see by their expressions that they were searching for truths that belonged to them. Most children love to express themselves in art.

The children did not interact with each other while they drew, nor look at each other's work. They all started instantly, no procrastination about what they wanted to express.

After they finished, each child came to the front of the class, held up their picture, and told a story to the rest of the class about the picture.

The stories varied with the usual childhood tales. These were not abused children, so this was not a group therapy session, by a journey through time.

It would have been wonderful to have videotaped the children, but this idea came from Z, out of the blue, not to mention you cannot tape children without their parents' consent.

The children listened attentively as each child told their story.

And so I got different perspectives of who they children were/are in other realities.

There were several children whose art and stories, blew me away.

A beautiful Chinese girl named Shuk drew the picture above.

She told the class that it was a pyramid standing in the middle of a body of water.

She spoke about a little girl who came to the Earth with her family, in a pyramid, and landed in China.

The little girl grew up brave and strong and helped many people. She had much love for everyone. She came from a place of love and kindness where people do not do battle.

She dressed in robes and lived a long time ago. She had a very long life, about 150 years.

One day the pyramid would come back for her, and take her back to her family that waits for her return.

What was really weird about the image was...it matched a brochure I had just received for a place in Nevada called Pyramid Lake, near Reno, that would be a very important part of my journey.

This picture and story came from a Puerto Rican boy named Giancarlo, who spoke little English.

He, too, told a story about boy who came to Earth from another planet, called Mars. People could travel on ship to the stars.

Mars was once a place of big mountains, where rivers ran between the mountains.

Mars was once a beautiful planet filed with lots of love.

There were threats of danger from invading worlds which caused its downfall.

Then one day something terrible happened and all was destroyed.

When Mars was destroyed, were sent to other planets far away.

The boy came in a pyramid and was happy to be here. The sun was watching him and guided his trip so he would not get lost.

He went in his space ship and came to Earth with the help of his robot who protected him.

He floated down to Earth and changed from a Martian to a human boy.

He was not the only one to come from Mars.

Many other children came here and landed all over the planet where they built homes and tried to adjust to life in this place.

One day men from Earth will visit Mars and find evidence of his civilization.

The third picture came from a Russian boy named Yuri whose father had come to the US several years before, and was finally able to bring his family here.

Perhaps it was Yuri's European heritage, but he clearly drew something that looks like Stonehenge, complete with what I believe are Egyptian hieroglyphs.

He spoke about a place far away where he came from.

He called it Atlantis and said he sees it in his dreams, as real as being here in school.

I asked if anyone had spoke to him, or if he had seen a TV show about Atlantis, and he replied NO.

Yuri spoke of crystal buildings and told about the life of the people who lived there.

Like him, they crossed a big ocean, the Atlantic Ocean, to find a new home.

The people were tall, strong and very brave.

They could travel off of the planet in great ships.

They believed in gods who lived in the sky.

The people spoke with their minds in languages that were strange to us but he could understand them in his dreams.

Then one day, there was a terrible catastrophe and many were killed as the ground shook.

And so they set sail in boats to find a new home.

....Now you know how I view these stories ...the children were able to tap into other parallel grid realities in which they are experiencing. They can communicate with other aspects of their souls and experience on many levels at the same time, especially as space-time is an illusion.

Common elements: Pyramids, devastation, water, starting over in another time and place, a feeling of connection to their place of origin, a feeling of returning Home.

If you are around children, perhaps you can share this creative writing exercise with them.