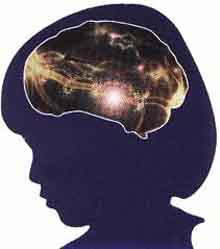 In truth and affects the brain. Abuse absolutely will leave a permanent "mark" on the psyche. Of course his physical abuse to the head but this is about emotional abuse. Everything that happens in our lives gets recorded and stored by the brain because in essence it's a computer.


Childhood abuse and maltreatment can shrink important parts of the brain, a new study of adults suggests. Reduced brain volume in parts of the hippocampus could help to explain why childhood problems often lead to later psychiatric disorders, such as depression, drug addiction and other mental health problems, the researchers say. This link could help researchers find better ways to treat survivors of childhood abuse.

"These results may provide one explanation for why childhood abuse has been identified with an increased risk for drug abuse or psychosis," study researcher Martin Teicher, of Harvard University, told LiveScience. "Now that one can look at these sub-regions [in the brain], we can get a better idea of what treatments are helping."

The researchers used magnetic resonance imaging (MRI) to scan the brains of 193 individuals between 18 and 25 years old, who had already undergone several rounds of testing to be qualified. They then analyzed the size of areas in the hippocampus and compared the results with the patient's history. They saw that those who had been abused, neglected or maltreated (based on well-established questionnaires) as children had reduced volume in certain areas of the hippocampus by about 6 percent, compared with kids who hadn't experienced child abuse.

They also had size reductions in a related brain area called the subiculum, which relays the signals from the hippocampus to other areas of the brain, including the dopamine system, also known as the brain's "reward center." Volume reduction in the subiculum has been associated with drug abuse and schizophrenia, as well.

In animal experiments (including non-human primates), this hippocampus can shrink because of high exposure to the stress hormone cortisol during two developmental periods: between ages 3 and 5 and between ages 11 and 13, the researchers said. These stress hormone levels stop the growth of neurons in the hippocampus, leading to smaller volume in the adult human brain.

Changes in hippocampus volume have been linked to depression, schizophrenia and other psychiatric disorders. High stress levels (from childhood abuse and maltreatment) during important brain development periods may be causing the decreased hippocampus volume that the researchers saw.

"This region has a lot of receptors for the stress hormone cortisol. It interacts with receptors in these neurons to effect the development and the branching of these neurons," Teicher said. "The neurons are responding by either shrinking or not going into neurogenesis - making new neurons."

These brain changes can cause mental illness, explaining why childhood abuse is highly correlated to diseases like depression and drug addiction. "By damaging it to some degree you may cause the dopamine system to be disregulated, and disregulation of the dopamine system has been linked to drug abuse and psychological illnesses," Teicher said.