The Chaldeans of ancient Mesopotamia - which today is Iraq, east Syria, and south east Turkey - are a live continuation of all the indigenous people of Mesopotamia whether their tribal names were Sumerians, Akkadians, Amorites, Babylonians, Assyrians, Chaldeans, and Aramaeans. The language of the Chaldean people is Aramaic, a different dialect than that spoken by Jesus. Tribes of settlers who arrived in the region from the 8th Century BC became known as the Chaldeans or the Chaldees.

The short-lived 11th dynasty of the Kings of Babylon (6th century BC) is conventionally known to historians as the Chaldean Dynasty, although only the first four rulers of this dynasty were known to be Chaldeans, and the last ruler was known not to be. Their kingdom in the southern portion of Babylonia lay chiefly on the right bank of the Euphrates. Though the name came to be commonly used to refer to the whole of southern Mesopotamia, Chaldea proper was in fact the vast plain in the far south east formed by the deposits of the Euphrates and the Tigris, extending to about four hundred miles along the course of these rivers, and about a hundred miles in average width.

Chaldea as the name of a country is used in two different senses. In the early period it was the name of a small territory in southern Babylonia extending along the northern and probably also the western shores of the Persian Gulf. It is called in Assyrian mat Kaldi "land of Chaldea". The expression mat Bit Yakin is also used, apparently synonymously. It would appear that Bit Yakin was the chief or capital city of the land; and the king of Chaldea is also called the king of Bit Yakin, just as the kings of Babylonia are regularly styled simply king of Babylon, the capital city. In the same way, the Persian Gulf was sometimes called "the Sea of Bit Yakin, instead of "the Sea of the Land of Chaldea."

It is impossible to define narrowly the boundaries of this early land of Chaldea, and one may only locate it generally in the low, marshy, alluvial land about the estuaries of the Tigris and Euphrates, which then discharged their waters through separate mouths into the sea. In a later time, when the Chaldean tribe had burst their narrow bonds and obtained the ascendency over all Babylonia, they gave their name to the whole land of Babylonia, which then was called Chaldea for a short time.

In 627 BC a series of wars broke out in the Assyrian Empire over who should rule. These wars greatly weakened the empire. Sensing this weakness, the Babylonians, the Medes, Scythians and Cimmerians formed a coalition and attacked the Assyrian Empire. In 612 BC they destroyed Nineveh and the last Assyrian army in 605 BC . In its place, Babylon under its Chaldean rulers and the Medes set up a new empires of their own.

The Old Testament book of the prophet Habbakuk describes the Chaldeans as "a bitter and swift nation". 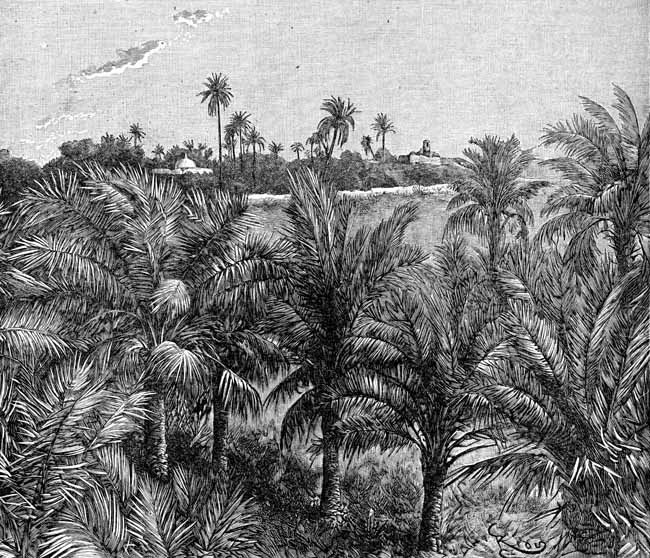 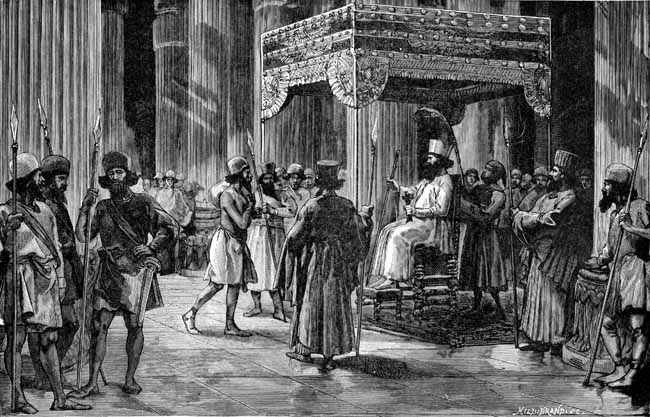 The Chaldean's homeland was in the relatively poor country in the far south of Mesopotamia, at the head of the Persian Gulf. The Chaldeans first came to prominence in the late 8th Century BC. Marduk-apla-iddina II (the Biblical Merodach-Baladan) of Bit-Y‰kin, allied himself with the powerful Elamite kingdom and seized control of Babylon in 721 BC after the death of the Assyrian king Shalmaneser V who had ruled Babylon directly from Nineveh.

The new king of Assyria Sargon II attacked and deposed Marduk-apla-iddina II in 710 BC. After defeat by the Assyrians he fled to his protectors in Elam. In 703 he briefly regained the throne from a native Babylonian ruler Marduk-zakir-shumi II who had ascended the throne after a revolt in Babylon against the Assyrian king, Sennacherib. He was once more defeated at Kish, and again fled to Elam where he died in exile after one final attempt to raise a revolt against Assyria in his homeland, Bit-Y‰kin in 700BC.

The Chaldeans briefly regained control of Babylon in 693 BC when the populace deposed Nergal-ushezib, and chose Mushezib-Marduk, a Chaldean prince to replace him. However, this was short lived, and Sennacherib sacked Babylon, destroying the city in 689 BC routing the Babylonians, the Chaldeans of Bit-Y‰kin and their Elamite backers in the process. Sennacheribs successor as king of Assyria, Esarhaddon rebuilt Babylon, but for the next 73 years Babylon remained under Assyrian control.

It was only in 620 BC under Nabopolassar that the Chaldeans finally gained control over Babylon, founding the Chaldean Dynasty. After the death of Ashurbanipal, the last great Assyrian king in 627 BC, Assyria descended into a period of bitter civil war. A rebellious Assyrian general Sin-shumu-lishir briefly set himself up as king in Babylon, but was ousted by Ashur-etil-ilani the legitimate king of Assyria. Further civil war erupted with Sin-shar-ishkun seizing the throne of Assyria from his brother Ashur-etil-ilani .

Nabopolassar took advantage of all this to seize a rebellious Babylon. Bitter fighting continued in the region from 627 to 620 BC, the final straw was another massive rebellion in Assyria while its king Sin-shar-ishkun was marching on Babylon in an attempt to regain control. Nabopolassar seized Nippur and thus Babylonia as a whole. Nabopolassar's position, and the fate of Assyria was sealed when he entered into an alliance with another of Assyria's former vassals, the Medes, the now dominant people of what was to become Persia.

The Medes, and Chaldean ruled Babylonians, together with the Scythians and Cimmerians attacked Assyria in 616 BC, and by 612 BC the alliance had sacked Nineveh, killing Sinsharishkun in the process. Nabopolassar and his allies were now in possession of the huge Neo Assyrian Empire. An Assyrian king Ashuruballit II held out at Harran, resisting until 605 BC, when the remnants of the Assyrian Army and an Egyptian force were defeated at Karchemish.

Nabopolassar was succeeded by Nebuchadnezzar II, who became king after the death of his father in 604 BC.

Nebuchadnezzar was a patron of the cities and a spectacular builder. He rebuilt all of Babylonia's major cities on a lavish scale. His building activity at Babylon was what turned it into the immense and beautiful city of legend. His city of Babylon covered more than three square miles, surrounded by moats and ringed by a double circuit of walls. The Euphrates flowed through the center of the city, spanned by a beautiful stone bridge.

At the center of the city rose the giant ziggurat called Etemenanki, "House of the Frontier Between Heaven and Earth," which lay next to the Temple of Marduk.He also made The Hanging Gardens of Babylon,for his wife from the mountains so that she would feel at home. Now,the garden is one of the seven wonders of the ancient world.

A capable leader, Nabuchadnezzar II, conducted successful military campaigns in Aramea (Syria) and Phoenicia, forcing tribute from Damascus, Tyre and Sidon. He conducted numerous campaigns in Asia Minor, in the "land of the Hatti". Like the Assyrians, the Babylonians had to campaign yearly in order to control their colonies.

In 601 BC Nebuchadnezzar II was involved in a major, but inconclusive battle, against the Egyptians. In 599 BC he invaded Arabia and routed the Arabs at Qedar. In 597 BC he invaded Judah and captured Jerusalem and deposed its king Jehoiachin. Egyptian and Babylonian armies fought each other for control of the near east throughout much of Nebuchadnezzar's reign, and this encouraged king Zedekiah of Israel to revolt. After an 18 month siege Jerusalem was captured in 587 BC, thousands of Jews were deported to Babylon and Solomon's Temple was razed to the ground.

Nebuchadnezzar fought the Pharaohs Psammetichus II and Apries throughout his reign, and during the reign of Pharaoh Amasis in 568 BC it is rumoured that he may have set foot in Egypt itself.

By 572 Nebuchadnezzar was in full control of Mesopotamia, Syria, Phonecia, Israel, Philistinia, northern Arabia and parts of Asia Minor. Nebuchadnezzar died of illness in 562 BC.

He was succeeded by Amel-Marduk, who was deposed after only 2 years on 560 BC.


The End of the Chaldean Dynasty

Labashi-Marduk reigned only for a matter of months, being deposed by Nabonidus in late 560 BC. Nabonidus, was certainly not a Chaldean, ironically he was an Assyrian from Harran. Nabonidus proved to be the last king of Babylon, he and his son, the regent Belshazzar being deposed by the Persians in 539 BC. 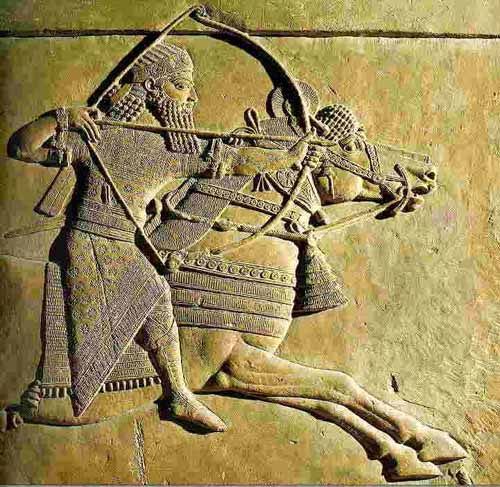 When the Babylonian Empire empire was absorbed into the Persian Achaemenid Empire, the name "Chaldean" lost its meaning as the name of a race of men, and came to be applied only to a social class. The Persians found the Chaldeans masters of reading and writing, and especially versed in all forms of incantation, in sorcery, witchcraft, and the magical arts. They quite naturally spoke of astrologists and astronomers as Chaldeans. It therefore resulted that Chaldean came to mean astrologist. In this sense it is used in the Book of Daniel (Dan. i. 4, ii. 2 et seq.), and with the same meaning it is used by the classical writers (for example, by Strabo).

Chaldean is believed to be the oldest of the systems of numerology. The use of numbers for predictive purposes were used by Chaldeans, Phoenicians, Hindus, Chinese, Hebrews, and early Christians.

The Chaldean System converts letters to numbers using numbers 1 to 8. Most of the symbology employed followed the progression of numbers, with Ones signifying a beginning or genesis, the higher numbers representing the progress through life, and Eights signifying completion.