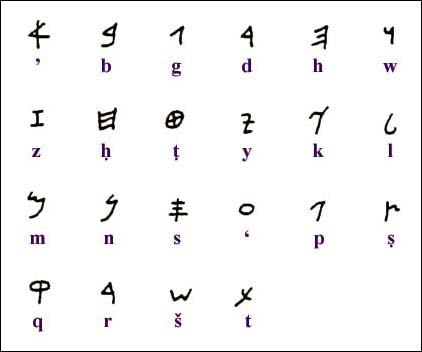 s a language or group of languages belonging to the Semitic subfamily of the Afroasiatic language family. More specifically, it is part of the Northwest Semitic group, which also includes the Canaanite languages such as Hebrew and Phoenician. The Aramaic alphabet was widely adopted for other languages and is ancestral to the Hebrew, Syriac and Arabic alphabets.

During its approximately 3,100 years of written history, Aramaic has served variously as a language of administration of empires and as a language of divine worship, religious study and as the spoken tongue of a number of Semitic peoples from the Near East.

Historically, Aramaic was the language of Aramean tribes, a Semitic people of the region around between the Levant and the northern Euphrates valley. By around 1000 BC, the Arameans had a string of kingdoms in what is now part of western Syria. Aramaic rose to prominence under the Neo-Assyrians (911-605 BC), under whose influence Aramaic became a prestige language and its use spread throughout most of Mesopotamia and the Levant. At its height, variants of Aramaic were spoken in all over what is today Iraq, Syria, southeast and south central Turkey, northwest Iran, Lebanon, Israel, Jordan, Palestinian territories, Kuwait and parts of Eastern Arabia[4] and Northern Arabia. Aramaic was the language of Jesus, who spoke the Galilean dialect during his public ministry, as well as the language of large sections of the biblical books of Daniel and Ezra, and also one of the languages of the Talmud.

The scribes of the Neo-Assyrian bureaucracy had also used Aramaic, and this practice - together with other administrative practicesŃwas subsequently inherited by the succeeding Neo-Babylonians (605Đ539 BC), and the Achaemenids (539Đ323 BC). Mediated by scribes that had been trained in the language, highly standardized written Aramaic (in its Achaemenid form called Imperial Aramaic) progressively also become the lingua franca of trade and commerce throughout the Achaemenid territories, which extended as far east as the Indus valley. (That use of written Aramaic subsequently led to the adoption of Aramaic script and - as logograms - some Aramaic vocabulary in the written forms of several Middle Iranian languages, including those of Parthia, Persia, Sogdiana, and Chorasmia.)

Aramaic's long history and diverse and widespread use has led to the development of many divergent varieties, which are sometimes considered dialects, though they have become distinct enough over time that they are now sometimes considered as separate languages. Therefore, there is not one singular, static Aramaic language; each time and place rather has had its own variation. The more widely spoken Eastern Aramaic and Mandaic forms are today largely restricted to northern Iraq, north east Syria, north west Iran and south east Turkey, whilst the severely endangered Western Aramaic is spoken by small communities in north western Syria and Israel.

Neo-Aramaic languages are still spoken today as a first language by many communities of Syriac Christians, Jews, and Mandaeans of Western Asia, most numerously by Assyrians with numbers of fluent speakers among Assyrian people ranging from approximately 575,000 to 1,000,000, with the main languages being Assyrian Neo-Aramaic (235,000 speakers), Chaldean Neo-Aramaic (216,000 speakers) and Surayt/Turoyo (112,000 to 450,000 speakers), together with a number of smaller closely related languages with no more than 5,000 to 10,000 speakers between them. They have retained use of the once dominant lingua franca despite subsequent language shifts experienced throughout the Middle East. However, the Aramaic languages are now considered endangered. The languages are used by the older generation, all beyond retirement age, and so could go extinct within a generation. However, researchers are working to record all the dialects of Neo-Aramaic languages before they go extinct. Aramaic