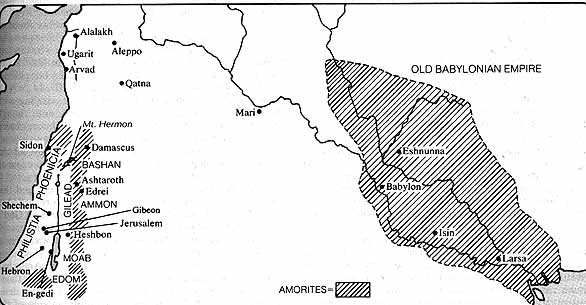 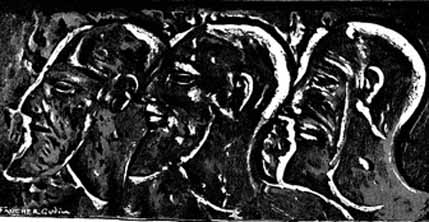 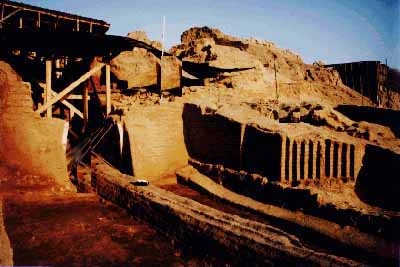 Amorite (Egyptian Amar, Akkadian Tidnum or Amurrukm (corresponding to Sumerian MAR.TU or Martu) refers to a Semitic people who occupied the country west of the Euphrates from the second half of the third millennium BC, and also the god they worshipped, Amurru.

Amurru or Martu are also names given in Akkadian and Sumerian texts to the god of the Amorite/Amurru people, often forming part of personal names. He is sometimes called Ilu Amurru (DINGIR.DINGER.MAR.TU). This god Amurru/Martu is sometimes described as a 'shepherd', and as a son of the sky-god Anu. He is sometimes called belu sadi or bel sade, 'lord of the mountain' and dur-hur-sag-ga sikil-a-ke, 'He who dwells on the pure mountain' - and kur-za-gan ti-[la], 'who inhabits the shining mountain'.

In Cappadocian Zircirli inscriptions he is called I-li a-bi-a, 'the god of my father'.Accordingly, it has been suggested by L. R. Bailey (1968) and Jean Ouelette (1969), that this Bel Sade might be the same as the Biblical El Saddai who is the God of Abraham, Isaac, and Jacob in the "Priestly source" of narrative, according to the documentary hypothesis. It is possible that Saddai means 'He of the mountains'. Alternately, Bel Sade could have been the fertility-god 'Ba'al', possibly adopted by the Canaanites, a rival and enemy of the Hebrew God YHWH, and famously combatted by the Hebrew prophet Elijah.

Amurru's wife is sometimes the goddess Asaratum who in northwest Semitic tradition and Hittite tradition appears as wife of the god El which suggests that Amurru may indeed have been a variation of that god. If Amurru was identical with El, it would explain why so few Amorite names are compounded with the name Amurru, but so many are compounded with EL.

Amurru also has storm-god features. Like Adad, he bears the epithet raman 'thunderer', and he is even called bariqu 'hurler of the thunderbolt' and Adad sa a-bu-be 'Adad of the deluge'. Yet his iconography is distinct from that of Adad, and he sometimes appears alongside Adad with a baton of power or throwstick, while Adad bears a conventional thunderbolt.

Another tradition about Amurru's wife (or one of Amurru's wives) gives her name as Belit-Seri, 'Lady of the Desert'. A third tradition appears in a delightful Sumerian poem in pastoral style, which relates how the god Martu came to marry Adg~ar-kidug the daughter of the god Numushda of the city of Inab. It contains an amusing speech expressing urbanite Sumerian disgust at uncivilized, nomadic Amurru life which Adg~ar-kidug ignores, responding only: "I will marry Martu!". The god Amurru was identified with the constellation Perseus.

In early Babylonian inscriptions, all western lands, including Syria and Canaan, were known as "the land of the Amorites", who twice conquered Babylonia (at the end of the 3rd, and the beginning of the 1st millennia.)

The old name is an ethnic term, evidently connected with the terms Amurru and Amar used by Assyria and Egypt respectively. In the Sumerian spelling MAR.TU, the name is as old as the first Babylonian dynasty, but from the 15th century BC onwards, its syllabic equivalent Amurru is applied primarily to the land extending north of Canaan as far as Kadesh on the Orontes. In unison with the decline of the Sumerian language in Mesopotamia, the Levant archeological era known alternately as either MB1 or Intermediate EB-MB was the time of their most famous incursions. Though herdsmen, the Amorites were not peaceful pastoralists. They were fierce tribal clansmen who apparently forced themselves into lands they needed to graze their herds. The urban Sumerians or Akkadians considered their nomadic way of life with disgust and contempt.

At first the Amorites were merely a regular irritant to the Ur-III empire, but eventually they undermined it to such an extent that the position of last king Ibbi-Sin was weakened, enabling his Elamite subjects to overthrow his rule.

Amorites seem to have worshipped the moon-god Sin and Amurru. Known Amorites (mostly those of Mari) wrote in a dialect of Akkadian found on tablets dating from 1800Đ1750 BC showing many northwest Semitic forms and constructions.

Presumably their original tongue was a northwest Semitic dialect (see Amorite language.) The main sources for our extremely limited knowledge about the language are proper names, not Akkadian in style, that are preserved in such texts. Many of these names are similar to later Biblical Hebrew names.

The wider use of the term Amurru by the Babylonians and Assyrians is complicated by the fact that it was also applied to a district in Babylonia, where the land of Canaan did not traditionally extend. Moreover, if the people of the first Babylonian dynasty (about 21st century BC) called themselves "Amorites," as Ranke seems to have shown, then obviously a common origin with them was recognized by the Babylonians at that early date.

The advent of Amorite tribes into the Mesopotamian context, engages deep and lasting repercussions over its political, social and economic structures.

The division into kingdoms has removed any trace of the Sumerian city-state and with it, disappeared most of it's principles upon which they were founded. Men, land and cattle ceased to belong physically to the gods or to the temples and the king. The new monarchs, gave or let out for an indefinite period numerous parcels of royal or sacerdotal land, freed the inhabitants of several cities from taxes and forced labour, and seem to have encouraged by a new society emerged, a society of big farmers, free citizens and enterprising merchants which was to last throughout the ages. The priest assumed the service of the gods and cared for the welfare of his subjects, but the economic life of the country was no longer exclusively (or almost exclusively) in their hands.

It is important to say that generally speaking, the Sumerian civilization survived the arrival of Amorites as it had survived the Akkadian domination and the Gutian conquest. The religious, ethical and artistic concepts current in Mesopotamia since proto-history, have not been affected. The Amorites worshipped the Sumerian gods and the older Sumerian myths and epic tales were piously copied, translated or adapted with in general only minor alterations. As for the scarce artistic production of the period, there is practically nothing to distinguish it from that of the preceding the 3rd dynasty of Ur period.

Amorites was used by the Israelites to refer to certain highland mountaineers, or hillmen (described in Gen. 14:7 as descendants of Canaan) who inhabited that land.In the Bible, they are described as a powerful people of great stature "like the height of the cedars," who had occupied the land east and west of the Jordan river; their king, Og, being described as the last "of the remnant of the giants" (Deut. 3:11).

The Biblical usage appears to show that the more specific "Amorite" and less precise general "Canaanite" terms were used synonymously, the former being characteristic of Judaean, the latter of Ephraimite and Deuteronomic writers as well as the Assyro-Babylonians.

A distinction is sometimes maintained, however, when the Amorites are spoken of as the people of the past, whereas the Canaanites are referred to as still surviving.

The term Canaan, on the other hand, is confined more especially to the southern district (from Gebal to the south of Palestine). It seems the terms at an early date were interchangeable, Canaan being geographical and Amorite the major ethnical identity of the Canaanites who inhabited the land.

Historically, these Amorites seem to have been linked to the Jerusalem region, and the Jebusites may have been a subgroup of them. The southern slopes of the mountains of Judea are called the "mount of the Amorites" (Deut. 1:7, 19, 20). One possible etymology for "Mount Moriah" is "Mountain of the Amorites," with loss of the initial syllable. 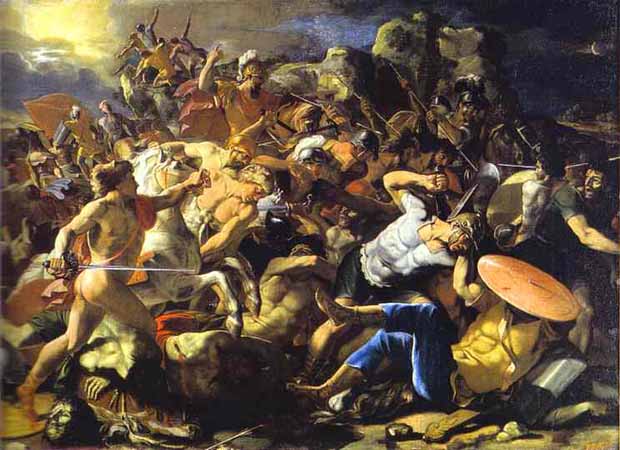 Five kings of the Amorites were first defeated with great slaughter by Joshua (10:10). They were again defeated at the waters of Merom by Joshua, who smote them till there were none remaining (Josh. 11:8). It is mentioned as a surprising circumstance that in the days of Samuel there was peace between them and the Israelites (1 Sam. 7:14).

The discrepancy supposed to exist between Deut. 1:44 and Num. 14:45 is explained by the circumstance that the terms "Amorites" and "Amalekites" are used synonymously for the "Canaanites."