'The Celestine Prophecy', 'The Secret'


In 1994 I had the pleasure to meet James and sally Redfield after they published "The Celestine Prophecy". The theme, the Law of Attraction and the way Synchronicity Principle works. This year we find "The Secret". Why does everything have to be a secret that humanity has to unravel in time, that seems to be the game plan of linear time as we experience on the journey into awakening and consciousness. Let's look at the stories ... 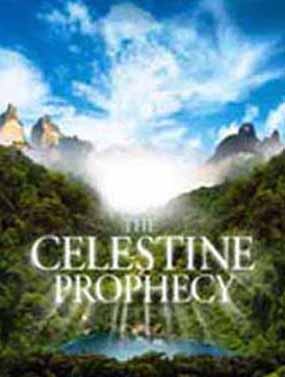 My friend, Pat, and I drove to Staten Island to attend the premiere of the Staten Island Film Festival, featuring the Celestine Prophecy. The event took place in the newly renovated St. George Theater.

Just outside the theater we met a woman who was 'impersonating' Bette Midler. At least that is what we thought she was doing. Dressed with an orange/red wig with a matching dress, she welcomed us. She really was funny, did a great impersonation.

Inside the theater there was a cocktail party after which we were seated. Pat and I had seats in the front row center mezzanine.

An organist, seated in a large alcove off to the right side of the stage, played music for half an hour before the movie began. During this time Z kept Pat and I amused by telling us the next song was dedicated from him to ... either Pat or I. For both of us ... he suggested several songs from 'The Wizard of OZ' which gave us a big laugh. He highlighted this with, 'Somewhere over the Rainbow.' Before the last song, Z said, "This one is just for you, Ellie." I anxiously sat in my seat and listened as the organist began to play, 'It Had To Be You'. (laugh)

The bad news is ... the sound system in the theater was not working properly, so we only heard bits and pieces of conversation during the film. Good way to learn 'lip reading'.

Here's the good news ... it's a good movie which takes you on another sacred journey with another 'Chosen One', John Woodson, linked to 9 ancient manuscripts and a parallel life experience dating to the 1600's.

The location and production, in Peru, was a good choice.

Great Cast, but the performance of the main male protagonist, actor Matthew Settle, left something to be desired. I might have 'chosen' someone else in the endless showcase of talent in Hollywood and NYC. Like the film version of 'The Da Vinci Code', Settle's chemistry and that of the lead female, played by Sarah Callies, did not come across well onscreen.

Special affects included white auras and transformation of souls into light beings, who looked like the The Shining Ones. Some of the special effects reminded me of watching normal TV then changing channels to a high definition channel for the same show. There is a difference.

The message :: I wish I could have heard what Sarah said when she read something found on a stone at the end of the film. To me the message is ... we are evolving into light beings. 10 years ago that was a major statement. By now you should have 'gotten it', The 'Aha' moments, epiphanies, synchronicities, et al.

In the film we see that we attract into our grid experience what is needed for our journeys, especially under stress/duress, when we disconnect from the grid and spin a new scenario, based on a desired outcome.

Would I recommend the film? I would. I will wait for the DVD to really embrace the energies though.

After the movie, most people did not wait to hear James Redfield and other speakers as the theater was hot and the sound system wasn't good.