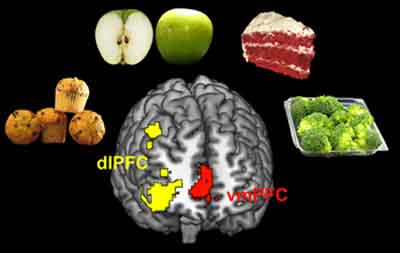 We all want to eat healthy to feel good, look good - and thereby raise self esteem, heal issues, shift energy grids, and move into balance and awareness in everything we do. We also know emotions - and lifestyles - often rule what and how we eat.


You're trying to decide what to eat for dinner. Should it be the chicken and broccoli? The super-sized fast-food burger? Skip it entirely and just get some Rocky Road?

Making that choice, it turns out, is a complex neurological exercise. But, according to researchers from the California Institute of Technology (Caltech), it's one that can be influenced by a simple shifting of attention toward the healthy side of life. And that shift may provide strategies to help us all make healthier choices - not just in terms of the foods we eat, but in other areas, like whether or not we pick up a cigarette.

When you decide what to eat, not only does your brain need to figure out how it feels about a food's taste versus its health benefits versus its size or even its packaging, but it needs to decide the importance of each of those attributes relative to the others. And it needs to do all of this more-or-less instantaneously.

Antonio Rangel, professor of economics and neuroscience at Caltech, has been studying this value-deriving and decision-making process for years now. Along with Todd Hare - a former postdoc at Caltech who is now an assistant professor of neuroeconomics at the University of Zurich in Switzerland - he published a paper in Science in 2009 describing differences in the brains of people who are better at exercising self-control than others.

What they found was that while everyone uses the same area of the brain - the ventral medial prefrontal cortex, or vmPFC - to make value-laden decisions like what to munch on, there's a second brain area - the dorsolateral prefrontal cortex, or dlPFC - that seems to come to life when a person is using self-control during the decision-making process. In other words, when the dlPFC is active, it allows the vmPFC to take into account health benefits as well as taste when it assigns a value to a particular food.

The new study goes a step further, showing that there seem to be ways to help kickstart the dlPFC through the use of what Hare calls "external cues" that allow us to exhibit more self-control than we might have otherwise.

The researchers came to their conclusions based on data from a brain-imaging experiment conducted with 33 adult volunteers, none of whom were following a specific diet or trying to lose weight for any reason. Each of the volunteers was shown 180 different food items - from chips and candy bars to apples and broccoli - through a set of video goggles while in a functional magnetic resonance imaging (fMRI) machine.

The hungry subjects - they were asked to fast for at least three hours prior to the experiment - were given up to three seconds to respond to each picture with a decision about whether or not they'd want to eat the food shown after the experiment was over. They could either give the food a "strong no," a "no," a "yes," or a "strong yes." Once all of the images had been flipped through, a single food image was chosen at random; if the volunteer had said "yes" or "strong yes" to the idea of eating that food, he or she was served that item.

"Because only one random trial was selected to 'count,'" says Rangel, "the optimal strategy for subjects is to treat each decision as if it were the only one."

Simple, right? But here's the catch: before every 10 food choices, an instruction would come on the screen for five seconds telling the subjects either to "consider the healthiness," "consider the tastiness," or "make decisions naturally." This meant that of the 180 decisions, the subjects made 60 in each of the three "instruction conditions."

What this was meant to do, Rangel explains, is shift the subject's attention during the experiment and, potentially, shift the way in which they made decisions.

Afterward - outside the scanner - the subjects were asked to rate the same foods on both a tastiness scale (very untasty, untasty, tasty, very tasty) and a healthiness scale (very unhealthy, unhealthy, healthy, very healthy). That way, the researchers were able to associate the choices the subjects made during the brain scan with their stated perceptions of those foods' attributes - showing that a subject who chose broccoli during the "consider the healthiness" portion of the test might think of it nonetheless as unasty.

Things got interesting when the researchers looked at the other three categories, however. Among their findings:

When the researchers turned to the fMRI results, they found that the vmPFC was, as predicted, "more responsive to the healthiness of food in the presence of health cues," says Rangel. And, as they'd seen previously, the robustness of that response was due to the influence of the dlPFC - that bastion of self-control - which was much quieter when the study's subjects were thinking about taste or their own personal choice than when they were asked to throw healthiness into the equation.

"This increased influence of the health signals on the vmPFC results in an overall value for the food that is based more on its health properties than is the case when the subject's attention is not focused on healthiness," says Hare.

These results are most likely not limited just to choices about food, Hare says. "Our findings are also relevant to the current changes to cigarette warnings many governments have started to make," he notes. "These changes include adding graphical images of the health risks of smoking. It remains to be seen whether these images will be more effective in drawing attention to the unhealthiness of smoking than the text warnings. If the graphical warnings do increase attention to health, then our results suggest that they could decrease the desire to smoke."

Jonathan Malmaud, a former research assistant at Caltech who is now a graduate student at MIT, was also an author on the Journal of Neuroscience paper, "Focusing attention on the health aspects of foods changes value signals in the vmPFC and improves dietary choice." The scientists' work was funded by a grant from the National Science Foundation. Being asked to think about healthiness led subjects to say "no" to foods more often than they did when asked to make decisions naturally.