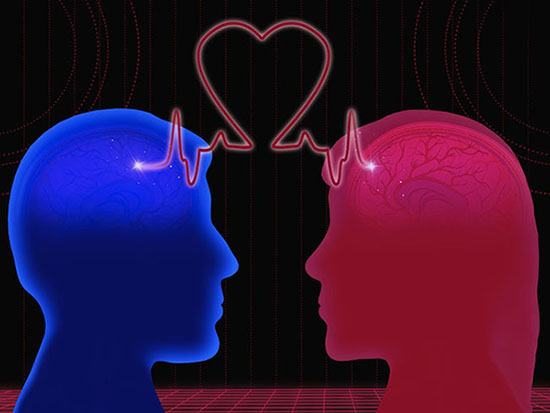 The human brain is an electrochemical machine that responds to stimuli - and is programmed with patterns of experience based on our DNA codes. The brain is nothing more than binary code - our physical bodies projected illusion in the consciousness hologram we believe is our reality. Everything in the hologram has a grid matrix. When we meet someone whose grid matches our own - a connection is made resulting in an instant attraction that is nothing more than a chemical reaction in the brain. It's all science and math, brought forth in linear time to experience emotions.


Science Explains Instant Attraction   Live Science - November 6, 2012
How do you know when you're attracted to a new face? Thank your medial prefrontal cortex, a brain region now discovered to play a major role in romantic decision-making. Different parts of this region, which sits near the front of the brain, make a snap judgment about physical attraction and about whether the person is Mr. or Ms. Right - all within milliseconds of seeing a new face, a new study from Ireland finds. The research is the first to use real-world dating to examine how the brain makes fast romantic judgments.

To conduct the study, researchers recruited 78 women and 73 men, all heterosexual and single, from Trinity College Dublin to participate in a speed-dating event. Like any typical speed-dating night, participants rotated around the room and chatted with one another for five minutes. After this meet-and-greet, they filled out forms indicating whom they'd like to see again.

But before the speed-dating event, 39 of the participants had their brains imaged. Using a functional magnetic resonance imaging machine (fMRI), researchers recorded the volunteers' brain activity as they saw pictures of the people they'd soon meet at the event. For each picture, the volunteers had a few seconds to rate, on a scale of 1 to 4, how much they would like to date that person. They also reported their physical attraction to each person and how likable they thought each person was.

In the next few days, the volunteers met face-to-face with the people in the pictures, during the speed-dating event.People turned out to be pretty good at knowing who interested them based on photographs alone, the researchers found. Some 63 percent of the time, their initial, photograph-based interest in dating a person was backed up by their real decision after their five-minute speed date.

The dating event, incidentally, was all aboveboard, said Jeffrey Cooper, a psychology researcher who conducted the study while he was a postdoctoral student at Trinity College. Participants who "matched" with another study volunteer really did exchange phone numbers, and between 10 percent and 20 percent ended up getting in touch with each other later, Cooper told LiveScience.

The brain on dating

More intriguing was what the brain was doing to make those judgments. The researchers found a link between one specific region of the medial prefrontal cortex, called the paracingulate cortex, and people's ultimate decisions about dating. This region buzzed with increased activity when volunteers saw photographs of the people they'd later say "yes" to. "We think it is especially involved in comparing options against a whole bunch of other options, or some sort of standard," Cooper said.

Meanwhile, the ventromedial prefrontal cortex, which sits closer to the front of the head, became especially active when participants looked at faces they thought were attractive. But there was a catch: This region was most active when looking at faces that most people agreed were hot. Of course, people don't always agree on who looks good.

When people saw a face that tripped their trigger but didn't get great ratings from others, a different region activated: the rostromedial prefrontal cortex, a segment of the medial prefrontal cortex located lower in the brain. "That region in this moment may be doing something like evaluating not just 'Is this person a good catch?' but 'Is this person a good catch for me?'" Cooper said.

That role makes sense for the rostromedial region, he added, because the region is known to be very important in social decisions. Among the judgments this region makes is how similar someone else is to you. Given that people tend to find similar folks attractive as potential mates, the rostromedial prefrontal cortex could be saying, "Hey, this one matches us!"

There are two ways to look at the results, published in the Nov. 7 issue of the Journal of Neuroscience. One, Cooper said, is that we're pretty shallow. In the first few milliseconds of seeing a new face, we're evaluating physical attractiveness. But the rostromedial prefrontal cortex goes a bit deeper, very quickly asking, "Yeah, but are they compatible with me?" "These really are separate processes," Cooper said. "But they really are both happening in your head as you make those initial evaluations."