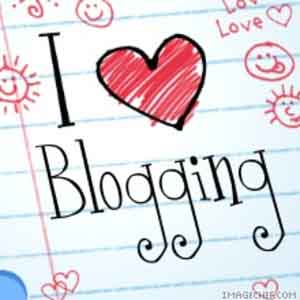 Do you blog? If so, what is the goal of each blog? What word best describes the nature of your blogs? Who is your target audience? Are you part of a group like eblogger? Do you express yourself better verbally or with the written word? Have you become a better writer by blogging?

Most people like to express themselves in the written word as it is a catharsis of their emotions. People who can't express themselves verbally, often have fun putting it down on paper, often editing the text over and over again.

Many authors hope that by sharing their story they can heal and help others going through the same problems they overcame. It's a vicarious way of releasing negative emotions and knowing you are not alone.

In the 21st century thousands of people have turned to blogging ... about everything. There are many websites for the new blogger to make formatting easy and fun.

The article below discusses bloggers' word choices and their personality traits. It's all Psychology 101 but worth exploring.

In one of the largest studies on the matter to date, Tal Yarkoni, a psychology and neuroscience postdoctoral fellow at the University of Colorado at Boulder, explores what our written words reveal about us. His work also rebuts the widely held belief that people can maintain distinctly different offline and online personalities. Yarkoni's research was published in the Journal of Research in Personality and was funded by the National Institutes of Health.

Several previous studies have identified a nexus between language usage and personality. But prior studies used writing or speech samples that were limited in size and focused on relatively broad dimensions of personality.

By studying language use in a large sample of bloggers, Yarkoni surmounted these obstacles. "People have been interested in personality and language for a long time, but it's really hard to get somebody to sit down and write 100,000 words. The nice thing about bloggers is they write a lot, often over very long periods of time," he said.

Yarkoni's data bear this out. On average, each of the nearly 700 bloggers in his sample provided more than 115,000 words of text, representing more than a novel's worth of material -- many times what previous studies have used.

These larger samples provided the ability to identify not only really large effects, which smaller studies can do, but also more subtle relationships. And they let us look at things you can't really look at with small writing samples.

For instance, are there specific words that people with different personalities tend to use more? Previous studies have really only been able to look at broad categories made up of many words.

For example, Yarkoni was able to determine that highly neurotic people tend to use specific negative adjectives like "terrible" and "worse" more, rather than just observing that they use more negative words generally.

The "Big Five" personality traits are openness, conscientiousness, extraversion, agreeableness and neuroticism. The top five words used by each of the Big Five traits varied as follows:

For those showing neuroticism, the top five were: "awful," "though," "lazy," "worse" and "depressing."

Among extroverts, the top hits were: "bar," "other," "drinks," "restaurant" and "dancing."

Agreeable personalities most often used these words: "wonderful," "together," "visiting," "morning" and "spring."

And conscientious personalities used these most often: "completed," "adventure," "stupid," "boring" and "adventures."

It turned out that many of these counterintuitive findings had a simple explanation: the word categories used in previous studies were so broad, they masked differences at the level of individual words.

When all the words were lumped together, however, it looked like agreeable people talked more about sex. The context and meaning provided by Yarkoni's study unraveled the puzzle.

"The results converge with other recent findings suggesting that, contrary to popular wisdom, people do not present themselves in an idealized and overly positive way online, and maintain online identities that reflect the way they genuinely see themselves and are seen by others," he explained.

Yarkoni notes that the overlap between offline and online selves shouldn't be surprising.

"If you're sociable and like to seek out people offline, you're probably going to do the same thing online," he said. "If you complain a lot when you're around your offline friends, you may very well complain about similar things in your online blog. Our personalities don't dramatically change just because we've turned on our computers."