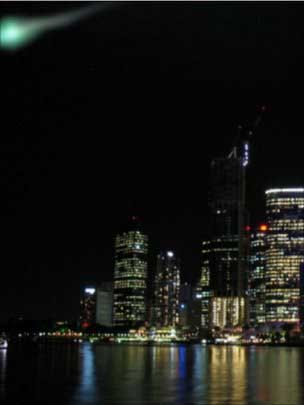 Our quest to find extraterrestrials and prove that UFOs are real, takes us to a new theory - Ball Lightning misinterpreted as UFOs.

We know that UFOs exist and that something visits and/or monitors planet Earth. Both single and multiple witness sightings are proof that something is out there which we suspect will soon become know to us. Media coverage shows photos and vides of what could be UFOs, but have no proof of where they come from and why they are here.

It is believed that our government and others have captured crashed UFO and used their discoveries to reverse engineer our current rapidly advancing technologies.

I maintain that until we have physical contact, we will never know the truth.

What are people seeing in the skies across the world? What has been covered up for decades? The answers are coming.

Another theory has come to 'light'. It may be true in part, but the question remains ... what is ball lightning?


Ball lightning may explain UFOs   BBC - December 1, 2010
Some UFO sightings could be explained by ball lightning and other atmospheric phenomena, claims Australian astrophysicist Stephen Hughes. The scientist has made a detailed study of an unusual event in 2006 when large meteors were observed over Brisbane. Their appearance occurred at the same time as a brilliant green object was seen to roll over nearby mountains.

Dr Hughes has put forward a theory linking the object - presumed to be ball lighting - to the fireballs. His idea is that one of the fireballs may have momentarily triggered an electrical connection between the upper atmosphere and the ground, providing energy for the ball lightning to appear above the hills. He has written up his explanation in a journal of the Royal Society.

Dr Hughes says the extraordinary episode, which occurred during a night of fine weather, is just the sort of happening that might lead some to think they had witnessed UFO activity. "If you put together inexplicable atmospheric phenomena, maybe of an electrical nature, with human psychology and the desire to see something - that could explain a lot of these UFO sightings," he told BBC News.

Eyewitnesses were asked to draw what they saw.

This is how graphic designer David Sawell recalled a fireball

The scientist, who is a senior lecturer at the Queensland University of Technology, initiated the study after being called in by the local TV station to look over and explain photos of the fireballs captured by members of the public on camera phones.

Fireballs are exceptionally bright meteors and are produced by fragments of space rock larger than the sand-grain-sized particles responsible for shooting stars; but like shooting stars they cross the sky at great speed. It seems at least three individual fireballs were seen on the night of 16 May 2006. 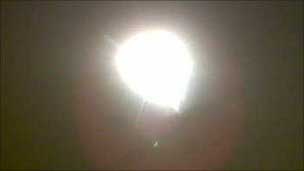 This photo gives a sense of the intense brightness of one of the fireballs.

A subsequent survey organized by the university brought forward many more eyewitnesses, including a farmer who recalled seeing a luminous green ball rolling down a slope of the Great Divide, a mountainous ridge about 120km west of Brisbane.

This object described as being about 30cm in diameter appeared to jump over some rocks and follow the path of a metal fence for "some minutes". The farmer said he saw the green object come into view just after a fireball had passed overhead. He thought at first he was witnessing a plane crash and called the police, but a search the following day found no wreckage.

Ball lightning seems an obvious explanation, says Dr Hughes. These bright, hovering spheres of light are not fully understood. They are known to be associated with thunderstorms, but not always, and there was certainly no electrical storm activity in the vicinity of the Great Divide. Dr Hughes does not offer a new explanation for the causes of ball lightning, merely how enough energy might have been put into the ground to trigger it.

He proposes that the natural flow of current that exists between the upper-most reaches of the atmosphere, the ionosphere, and the ground was increased by the passage of the meteor that streamed charged particles and other conductive materials in its wake.

"Could it be that the meteor descending through the atmosphere, having passed through the ionosphere, actually created a transient conductive connection between the ionosphere and the ground, even if it was only for a few seconds? Was that enough to put charge into the ground, and then with the discharge form some kind of plasma ball above? "Think of the ionosphere and the ground as the terminals on the battery and you put a wire between those two terminals and current flows, and literally you get a spark."

Other scientists have suggested that charges dissipating through the ground can create balls of glowing ionized gas above it.

Dr John Abrahamson from the University of Canterbury, NZ, championed the idea 10 years ago that ball lightning consisted of vaporised mineral grains kicked out of the soil by a conventional lightning strike, an idea later tested with some success by Brazilian researchers. He described Dr Hughes' work as "relatively feasible" and something which made "interesting connections. There's a long way to go before everyone will be happy and satisfied that we have a full solution," he told BBC News.

Dr Hughes said his publication in Proceedings of the Royal Society A: Mathematical and Physical Sciences was intended to start a debate. "It's not a vigorous theory; it's more a suggestion that may be worth exploring," he said.