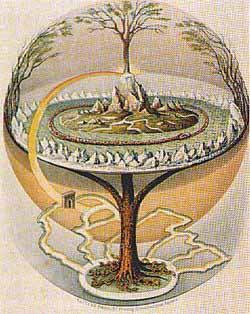 Axis Mundi (also cosmic axis, world axis, world pillar, center of the world, world tree), in certain beliefs and philosophies, is the world center, or the connection between Heaven and Earth. As the celestial pole and geographic pole, it expresses a point of connection between sky and earth where the four compass directions meet. At this point travel and correspondence is made between higher and lower realms. Communication from lower realms may ascend to higher ones and blessings from higher realms may descend to lower ones and be disseminated to all. The spot functions as the omphalos (navel), the world's point of beginning.

The image relates to the center of the earth (perhaps like an umbilical providing nourishment).It may have the form of a natural object (a mountain, a tree, a vine, a stalk, a column of smoke or fire) or a product of human manufacture (a staff, a tower, a ladder, a staircase, a maypole, a cross, a steeple, a rope, a totem pole, a pillar, a spire). Its proximity to heaven may carry implications that are chiefly religious (pagoda, temple mount, minaret, church) or secular (obelisk, lighthouse, rocket, skyscraper). The image appears in religious and secular contexts.The axis mundi symbol may be found in cultures utilizing shamanic practices or animist belief systems, in major world religions, and in technologically advanced "urban centers". In Mircea Eliade's opinion, "Every Microcosm, every inhabited region, has a Centre; that is to say, a place that is sacred above all." The axis mundi is often associated with mandalas.