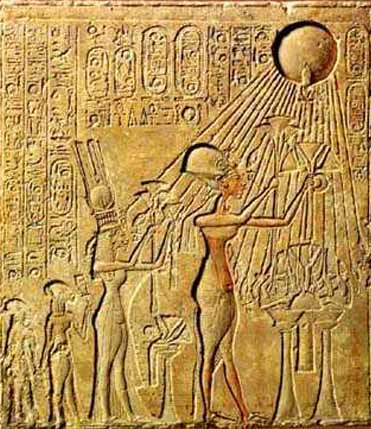 Lord of Heaven, Lord of Earth

Aten (or Aton) was the disk of the sun in ancient Egyptian mythology, and originally an aspect of Ra. He became the deity of the monotheistic - in fact, monistic - religion Atenism of Amenhotep IV, who took the name Akhenaten. The worship of Aten seemed to stop shortly after Akhenaten's death. In his poem "Hymn to Aten," Akhenaten praises Aten as the creator, and giver of life.

Aten was the life-giving force of light. The full title of Akhenaten's god was The Rahorus who rejoices in the horizon, in his/her Name of the Light which is seen in the sun disc. (This is the title of the god as it appears on the numerous stelae which were placed to mark the boundaries of Akhenaten's new capital at Amarna, or "Akhetaten.") This lengthy name was often shortened to Ra-Horus-Aten or just Aten in many texts, but the god of Akhenaten raised to supremacy is considered a synthesis of very ancient gods viewed in a new and different way.

Both Ra and Horus characteristics are part of the god, but the god is also considered to be both masculine and feminine simultaneously. All creation was thought to emanate from the god and to exist within the god. In particular, the god was not depicted in anthropomorphic (human) form, but as rays of light extending from the sun's disk. Furthermore, the god's name came to be written within a cartouche, along with the titles normally given to a Pharaoh, another break with ancient tradition.

The Aten, the sun-disk, first appears in texts dating to the 12th dynasty, in The Story of Sinuhe, where the deceased king is described as rising as god to the heavens and uniting with the sun-disk, the divine body merging with its maker.

Ra-Horus, more usually referred to as Ra-Herakhty (Ra, who is Horus of the two horizons), is a synthesis of two other gods, both of which are attested from very early on. During the Amarna period, this synthesis was seen as the invisible source of energy of the sun god, of which the visible manifestation was the Aten, the solar disk. Thus Ra-Horus-Aten was a development of old ideas which came gradually. The real change, as some see it, was the apparent abandonment of all other gods, above all Amun, and the introduction of monotheism by Akhenaten.

The syncretism is readily apparent in the Great Hymn to the Aten in which Re-Herakhty, Shu and Aten are merged into the creator god. Others see Akhenaten as a practitioner of an Aten monolatry.

During the Amarna Period, the Aten was given a Royal Titulary (as he was considered to be king of all), with his names drawn in a cartouche. There were two forms of this title, the first had the names of other gods, and the second later one which was more 'singular' and referred only to the Aten himself. The early form has Re-Horakhti who rejoices in the Horizon, in his name Shu which is the Aten. The later form has Re, ruler of the two horizons who rejoices in the Horizon, in his name of light which is the Aten