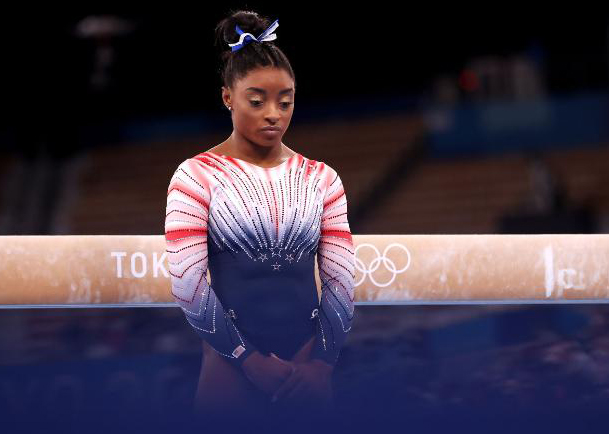 This was the year women's health and reproductive rights highlighted along with continuing emphasis on Covid and its variants and how this and other issues are affecting women and society in general. Abortion laws changed in several states as the battle to save Roe v. Wade marches on.

Mental health issues also took center stage as celebrities and athletes told their stories. Physical reality is created by electromagnetic energy which is bipolar and nature and therefore so are the situations and experiencers within .


Simone Biles opens up about her mental health post-Olympics: 'I'm still scared to do gymnastics'   CNN - October 22, 2021
In an emotional interview on NBC's "Today" show on Thursday, Biles said she's still struggling with the "twisties" as she performs on her Gold Over America Tour. The twisties is a mental block where competitors can lose track of where they are while in midair. "I don't twist (on tour). I do double lay half-outs, which is my signature move on the floor. That's never affected me. But everything else weighs so heavy, and I watch the girls do it, and it's not the same," said Biles, arguably the greatest gymnast of all time.


The USA Gymnastics sex abuse scandal relates to the sexual abuse of female athletes - primarily minors at the time of the abuse - over two decades in the United States, starting in the late 1990s. More than 368 people alleged that they were sexually assaulted "by gym owners, coaches, and staff working for gymnastics programs across the country.


See 2021 through the eyes of 12 women photographers   CNN - December 30, 2021
This year, As Equals, CNN's global gender reporting team, has endeavored to resist reactionary reporting. We've slowed right down. Our journalism has sought not just to report or describe what is happening to women and gender non-conforming people around the world, but to explore why various oppressions and inequalities persist - and why, in some cases, they are getting worse. Photography has been an essential tool for us in doing this work, but in an image-saturated world, and in industries - journalism and, more specifically, photojournalism - that are still dominated by men, it is important to continue to question what it is we need to see and who gets to capture the world that we see. This photo gallery, produced in collaboration with Women Photograph, helps to broaden what we think of as news stories worth telling, and gives a platform to more women storytellers and image makers.


International Women's Day 2021 - Every first opens the door for many
To mark International Women’s Day, we asked women around the world what lessons they’ve learned during the pandemic that could help other women in the year ahead. As of 2020, just 23 of the 622 Nobel Prizes awarded in the sciences have gone to women.