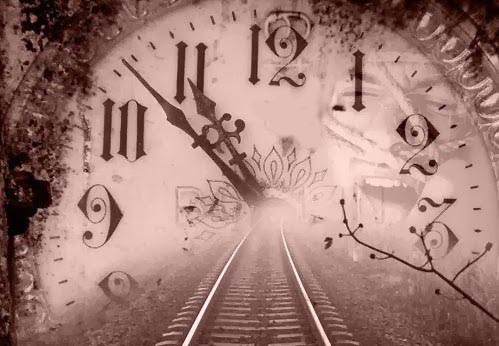 Time is an illusion.

We are all time travels.

Time can be encapsulated and retrieved.

Time is based on physics and mathematical algorithms. Math is a Matrix ... the Matrix of Illusion.

We are taught that if you time travel you alter timelines a.k.a. the grids or streams of consciousness that create illusions in quantumly entangled realities.

People claim to be time travelers and report events in other timelines.

If all and everything everywhere in the simulation is happening in the Now (concurrently) then how does one time travel?

Science fiction shows us the many different aspects of time travel as far as human or alien consciousness has been allowed to perceive/conceive.

I have always been drawn to the term Temporal Anomaly - a disruption in the spacetime continuum which can be related to time travel. Temporal anomalies can take many forms and have many different effects, including temporal reversion, the creation of alternate timelines, and fracturing a vessel into different time periods.

If you were to travel back in time and change one event you would create a temporal paradox an apparent contradiction, or a logical contradiction that is associated with the idea of time and time travel. Could you trust what you would experience?

Many past and current TV shows focus on the concept of Time and how it can be manipulated within the illusion to illicit a required response or result. It's called manipulation and is very much part of the deception of our reality. Currently the shows that come to mind include Westworld, Timeless, and The Crossing but the number increases along with maturity in the simulation of reality. We are growing up in the time tracks of our experiences.

Time travel symbolism: a train station with a standing clock, the tracks appear to meet at the event horizon which also refers to the boundary around a black hole --> this further links to creation of the Simulation of Reality or Holographic Universe Theory.

Can specific extraterrestrial crystals allow for time travel? Is there a special standard for time travel crystals if they exist in reality? Have they been incorporated into already existing technology thus creating a time machine? Do we exist/experience in a Time Capsule or Time Machine?

Last week three people - a man and two women - who do not know or live anywhere near each other - mentioned the term "Time Crystals" after apparent encounters with alleged extraterrestrial crystals. One woman researches WWII time travel experiments including the Philadelphia Experiment. The other two have connections to Peru (he lives there, visiting Brooklyn) and Costa Rica (she was guided there). They took me back to the days when all information allegedly hinted at was covert ... "I can only tell you so much because ..." When someone tells me that I immediately move on. Either tell me or not. It also means they don't have the answers for think they have the answers but in truth they don't or are unsure or unstable.

May-June in linear time is symbolized by Graduations - from the constructs and confines of conceptual reality. We are not programmed to fully grasp who created this simulation, how it works, and when it is going to end until it does. Outside of Time the Truth will be known to us.

The Butterfly Effect -- In chaos theory, the butterfly effect is the sensitive dependence on initial conditions in which a small change in one state of a deterministic nonlinear system can result in large differences in a later state - Edward Lorenz. This takes me to climate and natural disasters ...(see earthquake map above).