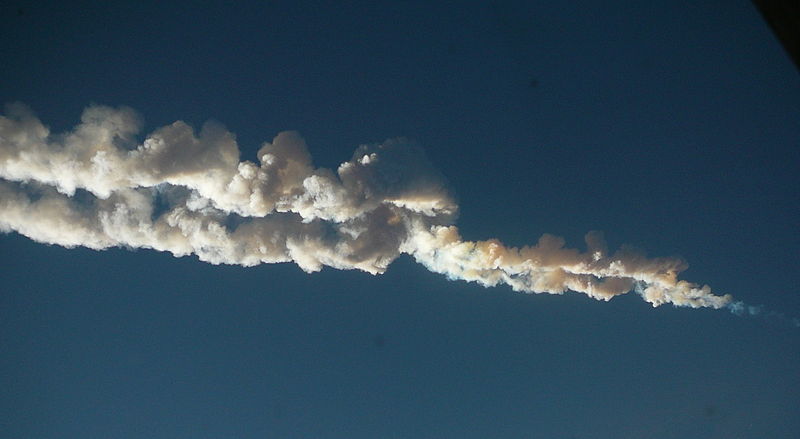 Russia has been in the news over the past week. The Russian Meteor Event left people wondering about the fate of the world, as it occurred a few days after Pope Benedict XVI announced he will retire on February 28, 2013, followed by a lightning bolt hitting St. Peter's Cathedral, and an earthquake in Rome.

Many speculated on the meteor being a crashed UFO, or other messages from God. It was just a wake-up call. A 6.6 earthquake struck Siberia. Fear reigned and people reached for Doomsday Prophecies to explain what was going on, as has been the case throughout the human journey.

On February 15, 2013, a meteor appeared in the atmosphere of Earth over Russia at about 09:20 YEKT (03:20 UTC) from the daylight side, becoming visible as a bright fireball. With a mass of about 10,000 tons and moving at about 18 km/s (about 40,000 mph) it passed over the southern Ural region and exploded in an air burst over Chelyabinsk Oblast. The air burst occurred about 15 to 25 km (10 to 15 mi) above the ground. The energy released was equivalent to nearly 500 kilotons of TNT (2.1 PJ), which would make it 20Đ30 times more powerful than either of the atomic bombs detonated at Hiroshima and Nagasaki.

Approximately 1,500 people were reported injured, mainly by glass from windows shattered by a shock wave; two in serious condition. Over 4,300 buildings in six cities across the region were damaged by the explosion and impacts. The meteor created a dazzling light, bright enough to cast moving shadows during the morning daylight in Chelyabinsk and was observed from Sverdlovsk, Tyumen, Orenburg Oblasts, the Republic of Bashkortostan, and in Kazakhstan. Eyewitnesses also felt intense heat from the fireball.

The Chelyabinsk meteor is thought to be the biggest reported object to enter Earth's atmosphere from space since the 1908 Tunguska Event, and the only such event known to have resulted in a large number of injuries. The object was not detected before atmospheric entry. The predicted close approach of the roughly 30-metre asteroid 2012 DA14 occurred about 15 hours later; SodankylŠ Geophysical Observatory, Russian sources, the European Space Agency and NASA indicated the two events could not have been related because they had different trajectories. 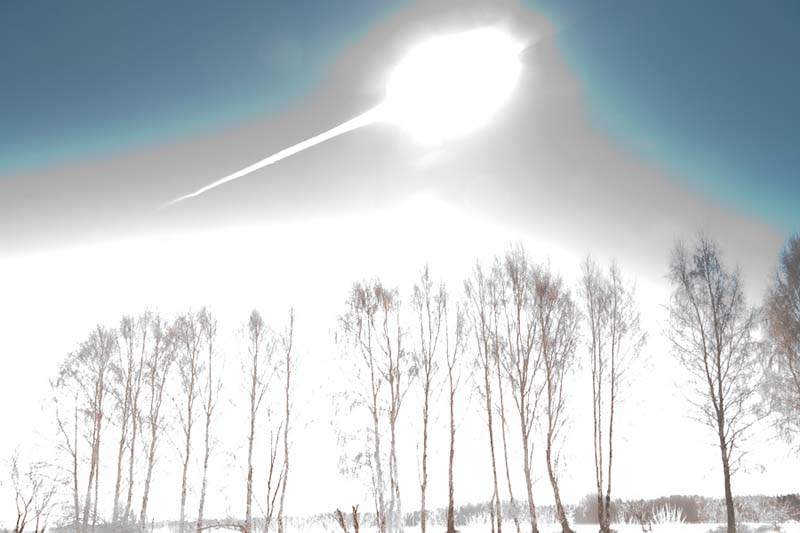 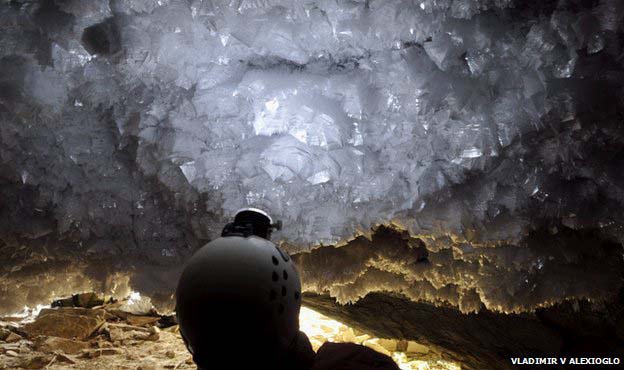 Siberian permafrost thaw warning sparked by cave data   BBC - February 23, 2013
Evidence from Siberian caves suggests that a global temperature rise of 1.5C could see permafrost thaw over a large area of Siberia. A study shows that more than a trillion tonnes of the greenhouse gases CO2 and methane could be released into the atmosphere as a result. An international team has published details in the journal Science. 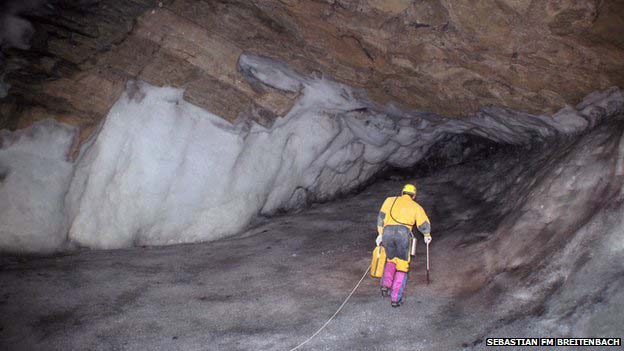 The evidence comes from analysis of stalactites and stalagmites in caves along the "permafrost frontier". This is where ground begins to be permanently frozen in layers that can be tens to hundreds of metres thick. Stalactites and stalagmites only grow when liquid rainwater and snowmelt drip into the caves. So these formations record 500,000 years of changing permafrost conditions - including warmer periods similar to the climate of today.

The records from a particularly warm period called Marine Isotopic Stage 11, which occurred around 400,000 years ago, suggest that warming of 1.5C compared to the present is enough to cause substantial thawing of permafrost - even in areas far north from its present-day southern limit.

"The stalactites and stalagmites from these caves are a way of looking back in time to see how warm periods similar to our modern climate affect how far permafrost extends across Siberia," said Dr Anton Vaks from the University of Oxford. "As permafrost covers 24% of the land surface of the Northern Hemisphere, significant thawing could affect vast areas and release (billions of tonnes) of carbon. This has huge implications for ecosystems in the region, and for aspects of the human environment. For instance, natural gas facilities in the region, as well as power lines, roads, railways and buildings are all built on permafrost and are vulnerable to thawing. Such a thaw could damage this infrastructure with obvious economic implications." 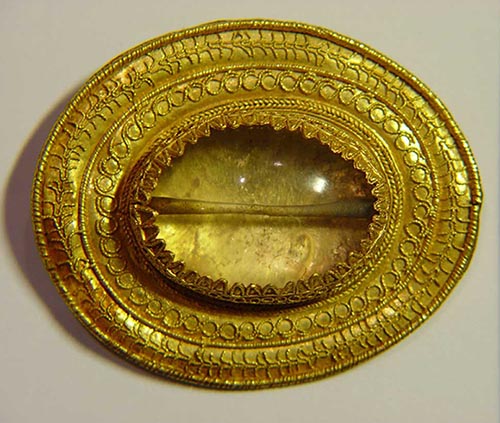 Treasure-Filled Warrior's Grave Found in Russia   Live Science - February 21, 2013
Hidden in a necropolis situated high in the mountains of the Caucasus in Russia, researchers have discovered the grave of a male warrior laid to rest with gold jewelry, iron chain mail and numerous weapons, including a 36-inch (91 centimeters) iron sword set between his legs. That is just one amazing find among a wealth of ancient treasures dating back more than 2,000 years that scientists have uncovered there. Among their finds are two bronze helmets, discovered on the surface of the necropolis. One helmet (found in fragments and restored) has relief carvings of curled sheep horns while the other has ridges, zigzags and other odd shapes.

Although looters had been through the necropolis before, the warrior's grave appears to have been untouched. The tip of the sword he was buried with points toward his pelvis, and researchers found "a round gold plaque with a polychrome inlay" near the tip, they write in a paper published in the most recent edition of the journal Ancient Civilizations from Scythia to Siberia.

The remains of three horses, a cow and the skull of a wild boar were also found buried near the warrior."These animals were particularly valuable among barbarian peoples of the ancient world. It was a sign of the great importance of the buried person, which was shown by his relatives and his tribe," wrote team member Valentina Mordvintseva, a researcher at the Ukrainian National Academy of Sciences Institute of Archaeology, in an email to LiveScience. The animal bones and pottery remains suggest that a funeral feast was held in his honor. Without written records it is difficult to say exactly who the warrior was, but rather than ruling a city or town, "he was rather a chief of a people," Mordvintseva said. The necropolis is located near the town of Mezmay. Grave robbers discovered the site in 2004 and rescue excavations began in 2005.

Based on the artifacts, researchers believe the warrior's burial dates back around 2,200 years, to a time when Greek culture was popular in west Asia, while the necropolis itself appears to have been in use between the third century B.C. and the beginning of the second century A.D. Researchers were careful to note that the artifacts cannot be linked to a specific archaeological culture. Mordvintseva points out that "this region is very big, and not sufficiently excavated," particularly in the area where the necropolis is located. "It is situated high in mountains. Perhaps the population of this area had trade routes/passes with Caucasian countries - Georgia, Armenia etc.," Mordvintseva writes in the email. While the people who used the necropolis were clearly influenced by Greek culture, they maintained their own way of life, said Mordvintseva. "Their material culture shows that they were rather very proud of themselves and kept their culture for centuries."

This way of life includes a fondness for gold-working. The warrior's burial included more than a dozen artifacts made of the material. Perhaps the most spectacular find was a gold fibula-brooch with a rock crystal at its center. Although the brooch was only 2.3 by 1.9 inches (5.8 by 4.8 centimeters), it had several layers of intricately carved decorations leading toward the mount. "Inside the mount a rock-crystal bead has been placed with a channel drilled through it from both ends," the researchers write.

The team was surprised to find that two of the warrior's swords (including the one pointing toward his pelvis) had gold decorations meant to be attached. In one case a short 19-inch (48.5-cm)-long iron sword had a gold plate, with inlayed agate, that was meant to adorn its sheath. Until now, scholars had never seen this type of golden sword decorations in this part of the ancient world, the researchers write. The "actual fact that these articles were used to decorate weapons sets them apart in a category all of their own, which has so far not been recorded anywhere else ..."