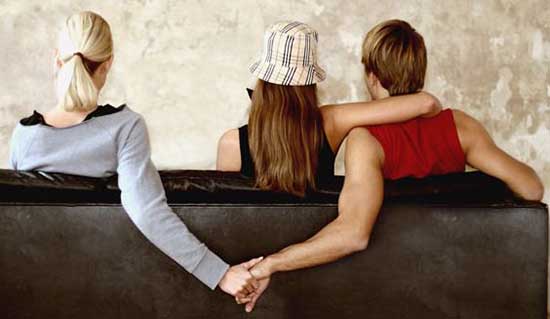 An old pattern is resurfacing ... the married person who has an affair because their partner had one first. With tears in their eyes, they come for a reading and speak of being betrayed by their spouse and how hurt they felt and how they turned to another for comfort and revenge sex only to discover a truth about themselves and the other two people involved.

There are those who are programmed to be monogamous and others who cheat with ... a former partner, a co-worker or neighbor, a same sex friend who is gay and already out, online sex, or just as simple as healing the wound by going to a bar and finding something or someone to ease the pain.

Revenge Affairs are usually designed to be found out by the person who cheated in the first place. There are clues, from cells phones also used as a GPS device to track the partner - to texts to email, to physical evidence. Nasty game this is.

Revenge Affairs never work out and most parties involved generally get hurt. Once they begin ... the cheating often becomes a pattern, the marriage eventually ending. It takes lots of therapy to try to work things out ... the emotional aspect of the betrayal usually lasting a lifetime. And with that ... is anyone really happy?

True revenge is finding someone better to share your life with as many people do.

What can result from several therapy sessions is a greater understanding of who you are - or more to the point who you have become in the years since the marriage/relationship began. We all change through the years and the need to understand that is most important. Rather than have revenge sex, work on yourself, as many people by changing bad habits, and discover what really makes you happy with a partner. Examine your emissions when you found out the truth and the depth of the betrayal if you feel betrayed at all, or just feel a loss of security. There are no promises of partners living together happily ever after.