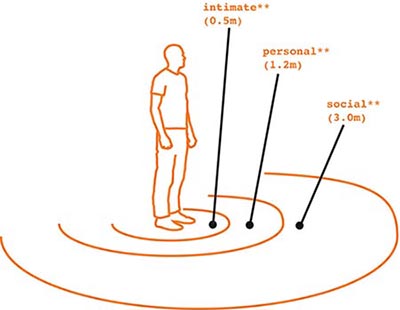 "Personal Space" means different things depending on the situation. Once again it's all in the brain - the computer through which we focus, process, then experience.

Physically, "Personal Space" refers to the region surrounding a person which they regard as psychologically theirs. The average brain understand this and has no problems when in conversing with others. It is automatic and acceptable. but ... do you get annoyed when someone who gets too physically close to you during a conversation invading your personal space? I find that really annoying and tend to take a step back. Sometimes the other person gets the message and other times they move closer again. So what does Ellie say? The truth ... "You are standing too close to me," as I move again. My assumption is that they will get the message and perhaps think about how they approach others.

Genetically, evolution seems to have programmed this discomfort via a brain structure called the amygdalae, a pair of almond-shaped brain regions deep within each temporal lobe that control fear and the processing of emotion. It's your amygdalae that keep you from getting so close to another person that he could easily reach out and harm you.

The amygdala is suspected of processing people's strong reactions to personal space violations since these are absent in those in which it is damaged and it is activated when people are physically close. The amygdala are almond-shaped groups of nuclei located deep within the medial temporal lobes of the brain in complex vertebrates, including humans. Shown in research to perform a primary role in the processing of memory and emotional reactions, the amygdalae are considered part of the limbic system.

Researchers put eight subjects with healthy amygdalae into a magnetic-resonance-imaging device. They found that the amygdalae in those individuals lit up when the participants were told that an experimenter was standing close to them, even if the participants couldn't actually see, hear, smell or in any way sense the experimenter. In short, that suggests that we are wired to repel close human contact - except, of course, when sex is a possibility. Which explains why so many introductions in bars go wrong. One party's amygdalae gets primed by proximity even as the other party's amygdalae submit to a more primal force: the need to procreate. :)

Psychologically, "Personal Space" can mean an intrusion into one's emotional life and programmed experiences that they must play out.

Metaphysically, "Personal Space" refers to bringing one's grid matrix and aura too close to another - sometimes merging the two - not good - unless romantic. When someone gets too close, most of us automatically build "imaginary" walls around us - shifting our grids as a defense mechanism that we may or may not be aware of. This always applies when threatened not only by humans, but by animals.

The Hologram and "Personal Space": We are virtually experiencing in a consciousness hologram which is another form of Personal Space. It is very complex but follows mathematically and scientific principles, which when understood, make it easy to understand. We also know how to protect ourselves by altering and shifting space and time - the question being - "What is our programed experience at that moment?" The brain knows and reacts according to programming. You are far more capable than you know, but won't be able to work it until the program ends. Bummer ... or as the Brits say, "Bugger"!

Entering somebody's personal space is normally an indication of familiarity and at times of intimacy. However, in modern society, especially in crowded urban communities, it is at times difficult to maintain personal space, for example, in a crowded train, elevator or street. Many people find such physical proximity to be psychologically disturbing and uncomfortable, though it is accepted as a fact of modern life. In an impersonal crowded situation, eye contact tends to be avoided. Even in a crowded place, preserving personal space is important, and intimate and sexual contact, such as frotteurism and groping, are normally unacceptable physical contact.

Frotteurism refers to a paraphilic interest in rubbing, usually one's pelvis or erect penis, against a non-consenting person for sexual gratification. It may involve touching any part of the body including the genital area. A person who practices frotteurism is known as a frotteur. The majority of frotteurs are male and the majority of victims are female, although female on male, female on female, and male on male frotteurs exist. This activity is often done in circumstances where the victim cannot easily respond, in a public place such as a crowded train or concert. Usually, such nonconsensual sexual contact is viewed as a criminal offense: a form of sexual assault albeit often classified as a misdemeanor with minor legal penalties. Conviction may result in a sentence or psychiatric treatment. 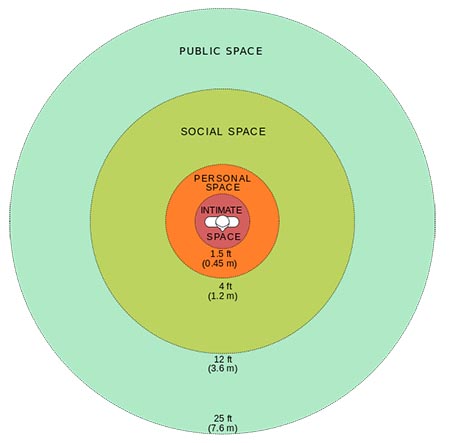 Why Do We Have Personal Space?   Live Science - June 6, 2012
Thou shall not transgress thy neighbor's personal space. It's among the most sacrosanct rules of social behavior. But how do these invisible bubbles of space surrounding each of us come to exist in the first place, and why does it feel so icky when they overlap?

First, how big are these bubbles? According to the American anthropologist Edward Hall, whose 1960s research on the topic still stands today, you're actually enveloped by bubbles of four different sizes, each of which applies to a different set of potential interlopers.

The smallest zone, called "intimate space," extends outward from our bodies 18 inches in every direction, and only family, pets and one's closest friends may enter. A mere acquaintance hanging out in our intimate space gives us the heebie-jeebies. Next in size is the bubble Hall called "personal space," extending from 1.5 feet to 4 feet away. Friends and acquaintances can comfortably occupy this zone, especially during informal conversations, but strangers are strictly forbidden. Extending from 4 to 12 feet away from us is social space, in which people feel comfortable conducting routine social interactions with new acquaintances or total strangers. Beyond that is public space, open to all.

Those are the average sizes of Americans' personal bubbles, anyway. According to Ralph Adolphs, professor of psychology and neuroscience at the California Institute of Technology, "It is important to keep in mind that personal space of course varies depending on culture and context, and that there are significant individual differences č so these numbers should just be taken to reflect the average."

As we all know, cultural or individual differences in personal bubble diameters are all too often the cause of discomfort. (Take one step back, foreigners.) But how do these personal bubbles arise? According to Adolphs, we begin to develop our individual sense of personal space around age 3 or 4, and the sizes of our bubbles cement themselves by adolescence. In research published in the journal Nature in 2009, Adolphs and his colleagues determined that the bubbles are constructed and monitored by the amygdala, the brain region involved in fear.

The amygdala is activated when you invade people's personal space. This probably reflects the strong emotional response when somebody gets too close to us. We confirmed this in a rare patient with lesions to this brain structure: she felt entirely comfortable no matter how close somebody got to her, and had no apparent personal space.

Futhermore, abnormal development of the amygdala may also explain why people with autism have difficulties maintaining a normal social distance to other people.

There are times when personal space intrusions are simply unavoidable, such as in a crowded subway car. How do we cope? Psychologist Robert Sommer suggested we do it by temporarily dehumanizing those around us, avoiding eye contact and pretending they're inanimate until the moment comes when we spot an "escape route". After all, it's not uncomfortable to stand inches from a wall.